Finished a pair of models recently for the RMMC (been slacking off on it due to needing to strip a heap of them) - first is Svala from Hasslefree: 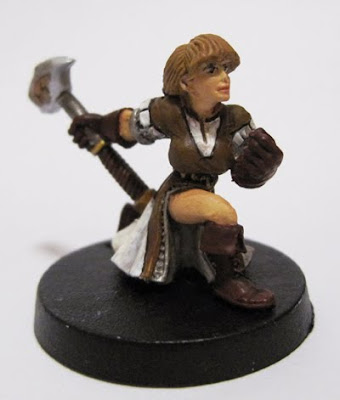 Second is Svala from Hasslefree: 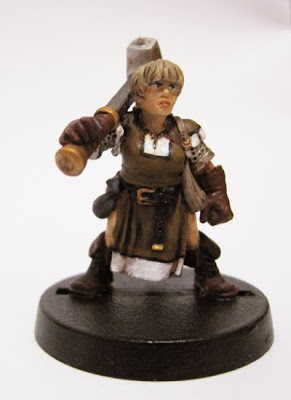 They were both really nice to paint, with lots of little details and a whole lot of character. As the second is the 'experienced' version of the first I painted them simultaneously to ensure the colours came out the same.

The clothes are Khemri Brown base with Snakebite Leather washed with Gryphonne Sepia and Ogryn Flesh. Young Svala has a touch of Devlan Mud, while Experienced Svala has a heavier going over to weather her more. Gloves are Dark Flesh washed with Ogryn Flesh. Belts in black, trimmed with Shining Gold and Dwarf Bronze. The pattern on the clothing changed to suit the figure's shapes and pose better, and is inspired by a Jersey Caramel (though I added some black lining to spice things up).

Skin tones were a base of Elf Flesh, lips in Dwarf Flesh. The whole face got a glaze of Sepia, and the lips, around the hairline and base of the neck and jaw were carefully washed with Ogryn Flesh. Eyes are simply black and white.


Very happy with how they both turned out - I'm leaving the bases black on purpose as I find it best for display models and it transfers to every gaming environment easily - no taking the wild woods with you into the dungeon.
Posted by Gotthammer at Monday, August 24, 2009 No comments:

What you need to know before you field your engine of death.

There are a suprising number of variables when fielding a superheavy in an army list - weapon loadouts the most common - and there are a few things that need to be brought up when planning an Apocalypse game. Yes, you really do need to plan these sorts of things thoroughly - you don't want to make your battle plan up and discover that the other side has a completely different idea of how reserves are working (in Apocastrike or Cities of Apocalypse especially). It's happened to me, and while no big deal really, it is a pain in the rear at the time with everything else going on.


D Limits - some groups limit SHs to one StrD weapon per unit (or player) - no Ultimate Jerkface Configuration for your Reaver then...


SH or Structure Point Limits - maximums of SHs and/or structure points per player or per team. If it's a per team limit how are they to be divided up. If it's a number of SH units cap you may need to re-think the all Baneblade army idea. Personally I favour an even(ish) number of SHs per side, as one side being outnumbered by alot will lose like they've never lost before


'Counts as', WYSIWYG & Proxying - Is this allowed? Does your Titan need to be armed with what it has or can that VMB count as a good gun? Is it necessary to have all sponsons on a Stormshadowbladelordhammer 100% accurate?

I personally avoid this in mega-battle type games, as there is so much happening that having to remind everyone every five seconds what weapons you have is an unnecessary distraction.


House Rules? - If playing as a guest are there any peculiarities of that gaming establishment? Are all explosions Apocalyptic with max radius? Do StrD weapons cause D3 wounds on GCs?


Loadouts - Do they need to be declared when army lists are submitted or can they be decided on the day? Obviously a big tactical consideration if you don't know what enemies you'll be facing.


Other important factors are how tables will be layed out, their dimensions, objectives etc etc. Working these out beforehand will allow you to make a much more informed army list choice, and see that your Titan (or Stompa or Heirodule or Scorpion) make as big an impression as possible.
Posted by Gotthammer at Sunday, August 23, 2009 No comments:

Glorfindel - Lord of the West 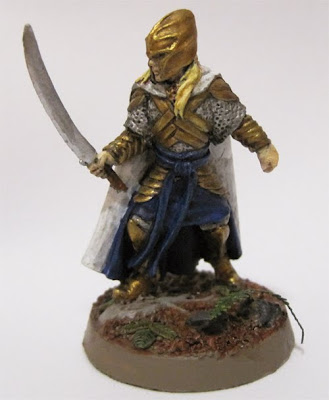 He's based on an Iron Halo Wyldewoode base, with a bit of bracken from Hasslefree (which I promptly bent when moving him to photograph). A nice change from 40k stuff, I'm pretty happy with how he turned out.
Posted by Gotthammer at Friday, August 21, 2009 No comments:

Rules Discussions and Tactica
Is the Phantom worth 2500pts? - Thoughts on the Phantom's advance release rules.

Arena of Death - Phantom vs Warlord - Pitting giant robots against each other in brutal combat.


Titans in Assault - How to deal with being assaulted, when to assault and what to look out for.

Pre Game Planning - What you need to work out before the game has even begun, and why it's important.

Apocalypse Rules & Dirty Tricks - A few bits and pieces many people miss in the Apoc rulebook.

Blast Weapon Deviation - How likely are you to hit your target? A bit of mathammer to help you out.

Is the Phantom Worth 2500 points? - Analysis and thoughts on the experimental rules.

Arena of Death: Phantom vs Warlord - The two giants slugging it out in no-holds barred combat!


How to Kill a Titan

Shadowsword variants I - The six made from the plastic kits

Closing the Gap - Changes to the Superheavy rules to bring them into the same durability level as Gargantuan Creatures.

Posted by Gotthammer at Thursday, August 13, 2009 No comments: