So your regular Apoc opponent has a Titan (or Stompa, or Heirodule, or other superheavy) and you don't. How do you deal with it and still have enough of your army left to win?

This series will deal with the ways puny tanks and insignificant footsloggers can put a hurting on the greatest warmachines in the galaxy - the Titans of the Adeptus Mechanicus Collegia Titanica.
Later sections will cover army specific tactics and taking down other superheavies (Banablades, Thunderhawks etc).

First step is to know the capabilities of your opponent, and how to use them to your advantage. 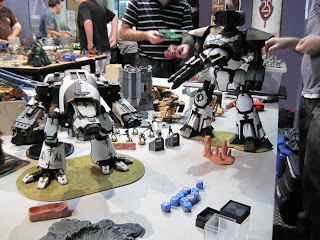 Whaddya mean no cover save?!
Obviously Titans are big. This means it is very easy to get LoS on them. The flip side is that they can see over most terrain to wipe things off of the board at will. Their great size comes at a cost - severe lack of maneuverability.

In the above picture the Reaver, Igneaus Angelus, is in a good firing position: Terrain and a board edge to prevent assaults, friendly forces (the Kroot and Tau) to act as a counter attack force etc. However is she needs to move anywhere there's not a whole lot of room. As a walker a Titan takes difficult terrain tests as normal, but doubles the result (for a 2-12" move).
A Warhound is approximately 9" long and the same wide. A Reaver is 11" long and almost 10" wide. Even moving at top speed they're not evading any enemy fire with ease. Following the example should Igneus Angelus need to get out of her position with any speed - it isn't going to happen. She can tank shock enemy units out of the way, but not friendly ones. And tank shocking won't give enough space with her size to actually get away from enemy forces.

Titans can move, but not fast enough to escape anything.

To use this to your advantage the easiest way is to pincer them. For example a unit of melta gun toting IG Veterans behind, a squad of TH/SS Terminators in front. If the Titan stays put they expose thier rear armour to the meltas, but they can't move away from the meltas without getting closer to the Terminators.

Facing for Titans is interesting: they are Superheavy but follow the Walker rules. The contradictory part is that as a SH the weapons can target different targets, but walkers have to turn to face their target. My interpretation is that the weapons can swivel to target anything they choose without the main body turning (so long as the weapon mount can draw LoS) but the walker may pivot to bring more guns to bear. This does expose a weakness in some Titan layouts that can be exploited: Putting the target for the left arm gun on the Titan's right.
For example if the Titan has a Gatling Blaster (anti infantry) on the right arm and a Lasblaster (anti tank) on the left putting a superheavy target or similarly tough unit (Landraiders, Monoliths etc) out of the anti-tank's arc of fire can force the Titan to turn. It may not expose weaker armour, but it could well block the arc of the right hand gun and prevent it from splattering your infantry.

Imperial Titans are tough. A Reaver (whose stats can be dowloaded from Forgeworld) has armour of 14/14/13, with four Void Shields (essentially AV12 layers) and six structure points. Warhounds are slightly lighter, with weaker armour and less shields and structure points.

When I put a Titan on the table a lot of people baulk at the impossability of killing it. The trick is that one single weapon will do very little, but combined arms action will cripple a Titan when done with commitment.

If you plan on using shooting it could well take a full turn to kill a Reaver. Firing a couple of Lascannons each turn won't do much - but firing a barrage of lighter fire to take down the shields then opening up with missiles and lascannons will be much more effective. As an example, to kill Igneus Angelus a combined Guard/Eldar/Daemon army needed (in the battle pictured above):

- A manticore - three hits, no void fields knocked down.
- Laserburn strategem - no voids knocked down (the giant laser o doom killed a single kroot - that was it!)
- Vulture gunship - six hunter killer missiles inside fields. No glances even.
- Marcharius Vanquisher - a couple of shields
- Baneblade - a shield.
- Two leman russ - nothing.
- Soulgrinder - drive damaged, failed to shake the AML.
- Scorpion superheavy - knocked down a shield and took off a structure point.
- Second Scorpion - shook the lasblaster and blew off the melta cannon.
- Third Scorpion - immobilised her, took off five structure points with an epic chain reaction and blew her (and a whole lot more) to kingdome come!

Praedecatio (the Warhound) took a fair bit of fire, then was killed by combined guard fire and soulgrinder assault. When it exploded it handily killed a whole bunch of Stormtroopers who had just deep struck near the Tau objective.

Now, even excluding the last Scorpion Igneus Angelus was prettymuch out of action - one gun gone and the other not firing the next turn. She had her AML left, but that's not to great when all that stuff above is still on the table.

So when shooting the key thing is that you need to make a commitment to do some damage that turn - attempting a piecemeal attack will waste resources better spent on killing the rest of the enemy army.

Assaulting a Titan is one of its big weaknesses. They have poor WS and cannot be locked. How is that bad? Well it means you get to charge every time you want to fight. It does leave your assault troops vulnerable to counter attack but if they are dead-killy enough they coul deven chew through the counter attack in one round with luck. Attempting to bring a Titan down with Melta-Bombs is a bad idea in my book as you hit on 6s and are against frontal armour due to it being a walker. The best weapons are Chainfists, Thunder Hammers and the like. The low initiative is not a big deal, as attacks will be simultaneous. A squad of Chaos Terminators with combi-meltas, power/chain fists and an Icon of Khorne will ruin a Titan's day up close.


Killing Your Stuff (and how to avoid it)

Titans are very good at killing your stuff. It's what they exist for, and if you're reading this no doubt what you've experienced. I have done a fairly detailed analysis of the Imperial Titan weapon systems that you can find archived here: Titan Archives.

In a game of Apocalypse there are still objectives to be had and this should be always foremost in your mind. A titan can easily change the course of a game by vapourising your troops off of your well defended objective with contempt. StrD weapons ignore saves and cover, so unless you've got your guys totally out of LoS (and immune from barrage weapons in some cases) they are at risk.

To avoid this there are two methods - the first is to split your guys up over multiple levels so that the StrD templates of death won't be able to annihilate you (merely decimate) and keep as many as possible out of sight.

The second is to distract the Titan with nice juicy targets like other Superheavies, special characters, expensive formations etc etc. Most budding Princeps won't pass up a chance to nail a rival Titan or vapourise the Avatar in one shot (no Eternal Warrior eh? Eat strength D!). It may be costly points wise, but if it stops them pummeling your objective claimers it can be seen to be worth it.

"But what if I have no Forgeworld stuff, and just have Codex gear?" I hear you say. Well those formations in the Apoc Book can be pretty nasty (take the Vindicator one that lets you blow up bits of scenery for example). The Titan will probably ignore them for the first couple of turns but after you vapourise a ruin and the squad in it you may well get the big guy's attention. The same goes for things like Ghazgahgul or Eldrad. They seriously buff your army and will be big targets. Put either one in a big, hard to kill unit (Ghaz in a Green Tide formation for example) and they'll throw everyhing at it to kill it.


Now what if your enemy Princeps isn't so easily fooled? Well there's not much to do really, aside from kill it as soon as possible. How to do that exactly? Well stay tuned as that's the next update - starting with the Emperor's finest: Space Marines.
Posted by Gotthammer at Tuesday, October 13, 2009