The Adventures of House Drake 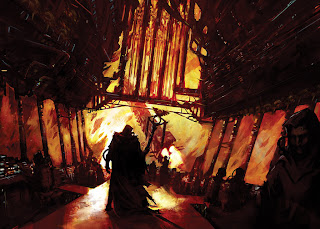 My game of Rogue Trader has been going rather well so far, with the PCs getting up to all sorts of hijinks in the last adventure, and the players getting a good handle on their personalities.

They've played through Forsaken Bounty merged with the intro adventure in the main rulebook, Vaults of the Forgotten and have just startedthe somewhat longer Lure of the Expanse.
During this time they've created a bitter rivalry with House Fel, set about a salvage operation of the Emperor's Bounty, fought off a Rak'Gol attack and destroyed four enemy vessels. Not too shabby I think. 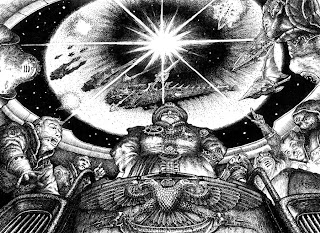 The party even managed to get one over on the Kasballica Mission! Having discovered the mysterious (and dangerous) crystals at Egaria Omega they didn't want them falling into the hands of the Kasballica.Fortunately the only people who knew about them were the PCs, the archaeologists (who wanted them hidden too), and the Kasballica agent Leerus... who the PCs flushed out of an airlock, blaming his death on the Rak'Gol.
Using the Rak'Gol attack as a cover they moved the dig site far away, taking the crystals with them and keeping the Kasballica well in the dark.

They also earned the respect of the Crow Spirits, saving Badb Ra's life (albeit by chanswording off her leg to pull her free of the maze city, but still...)

The Liege's Ball on Footfall had some particularly hilarious roleplaying:

- all the PCs who ate the disgusting food on offer (for bonuses to social tests) failed to digest properly and suffered some penalties.

- Tian, the party's psyker, has a particular hatred for Lady Ash, Fel's psyker consort. Whilst trying to talk to her he got in to an argument with Fel and Djanko Scourge, resulting in a challenge to eat the more disgusting foods. After some macho talk Tian realised eating the deep warp eel would be a bad idea, and George (the Explorator) created a distraction - by punching a nearby partygoer across the room.
Tian took the opportunity to hurl his appetiser across the room as neither Fel nor Scourge would dare call him a liar.

- Willow, the Sister Hospitaller, flirted shamelessly with Jeremiah Blitz (deducing he may be the man Murderin' Dave is after) and got a lot of useful information out of him. She then got rather charmed by Abel Gerrit in return.

- George managed to win over Aoife Armengarde through their shared love of Eldar weapons and duelling, a valuable contact for the group at this early stage.

- James, the ex-Navy Captain, has been having plenty of.. success (ahem) with his relationship with Mademoiselle Charlabelle, and has successfully established a line between personal and business matters. 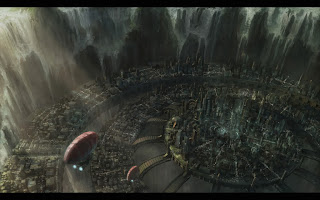 Things look like they should be very interesting in the near future: They're going to try and ally with Charlabelle and Gerrit in pursuit of the Dread Pearl - a wise move given the calibre of their competition - and possibly even rope Blitz into things.
They've earned the ire of Fel and Scourge, and Feckward (and his brothers) are old foes of the family.

The plan is that Bastille will die off camera in the final space battle (his cruiser plunging to earth as a final apocalyptic set piece), leaving his now defunct holdings up for grabs. I'm also changing the location of the planet linked by the webway to Rain, so if the PCs escape the Dread Pearl they'll be 'nearby' and can hopefully find and repair the abandoned colony and its communications gear. That will also provide a base of opperations for them and an initial holding as well.
Posted by Gotthammer at Wednesday, February 29, 2012 No comments:

So here is issue #3, and possiably the last issue for a while as the PCs will be shortly embarking on the quest for the Dread Pearl detailed in Lure of the Expanse. 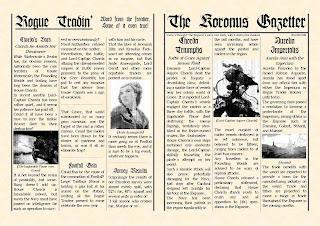 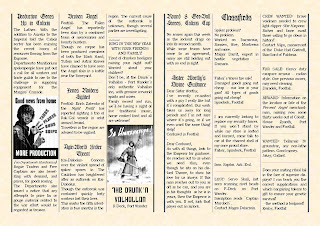 That is assuming they escape the Egarian maze-city they're currently stuck in and get past the swarms of Rak'Gol waiting outside.

The quest for the Dread Pearl will take them far from the civilised (and not-so-civilised) ports of the Coreward stars to the very edges of the galaxy, where it is hard to get one's newspaper delivered. It'll also be pitting them against nine other Rogue Traders in a race so they'll be sure to be motivated and will be completely unable to turtle (or if they do they'll surely fail).

Lure of the Expanse (and many Rogue Trader whatits) was written by the blogospere's own Andy Hoare, who is currently working on a rather fun sword 'n' sprcery ruleset called Get the Girl, Kill the Baddies. You can read more about it, download the beta rules and give any feedback at his blog.
Posted by Gotthammer at Saturday, February 25, 2012 No comments:

Well, here is Issue Two of my player handout. Issue #1 went over great with the players - in fact next session they'll be investigating a few hooks from the classifieds and back page. 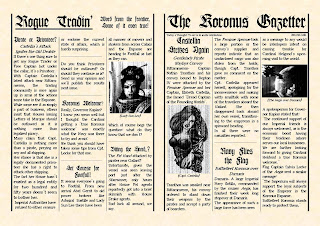 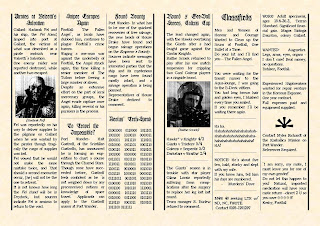 The PCs, of House Drake, will also get their first taste of fame in this issue. Last adventure I combined the Forsaken Bounty and Into the Maw adventures, so they encountered one Hadarak Fel (though not in person) and after some tricky combat got a great crit hit on his ship and blew most of its systems out.
They claimed the Emperor's Bounty, drove off Fel and made a deal with the Kasballica (who I'm presenting as more space-Yakuza [ie quasi-legitimate]) to salvage it.
Though of course the Kasballica require something of the PCs to prove they can be trusted in business, as their family is in a not godd financial position... leading into a fun filled trip to Egaria Omega *mwahahaha!*

Also a big internet high five to Andy Hoare for writing the books that contain a great swathe of the characters I'm using. Working out the character's backstories one of the (rabidly anti-xenos) PCs childhood sweetheart was one Charlabelle Armelan, hirer of kroot, weilder of Eldar weapons *mwahahaha!*


Got a whole load of ideas to throw at the party - kidnapped crew, Nigerian Prince scams, incompetent but politically necessary midshipman and so much more.

I'm also going to do some sketches of the various cast and crew once I get descriptions of the PCs finalised (one of them might just be 5'10", bald and kinda stocky...). Some pictures I have done recently though to end this post: 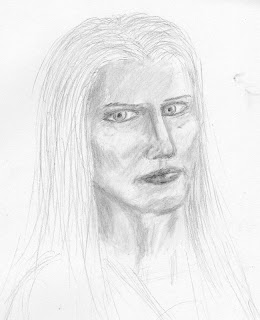 She's scowling because I haven't coloured her hair in. 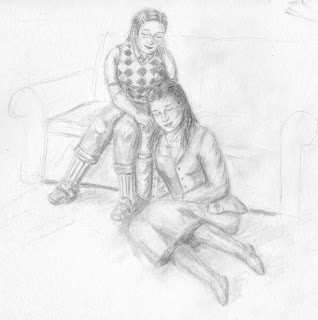 It's not that I haven't finished the couch, it's a clear inflatable one.
Posted by Gotthammer at Tuesday, February 07, 2012 No comments: