The Phantom kit comes with a Pulse Laser and Long-barreled Star Cannon designed to be mounted under the AA Missile Launcher on the left shoulder. Obviously if you glue one in you can only ever use that one, so I decided to magentise the socket and make some more options. 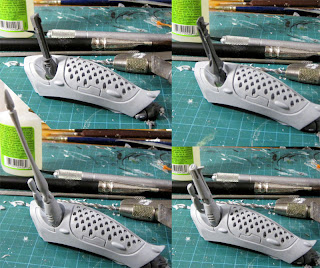 The first step is selecting a magnet - I'm using 1/8th inch neodyium ("rare earth") magnets sourced from MagLab. Non-Australians can just google suppliers I'm sure.
These magnets are very strong for their size, and fairly inexpensive (20c each) for the utility they provide.

Second step is to mount the magnets. I begin by drilling a small indent in the shoulder mount socket, as this is the universal acceptor, so it doesn't have to match anything. Picking a spot roughly in the centre I made the indent around half the depth of the magnet.
The magenet is glued in place using Zap-a-Gap, and greenstuff packed around the edges of the magnet, flsuh with the top.

Next is mounting the magnet on the weapons. The key here is that the weapon magnet has to...

1) meet up with the socket magnet accurately

2) stay attached and not come out


How I do it is similar to how I pin joints, a method I learned at The Inner Geek, using greenstuff (or blu-tac).
Taking the weapon magnet I drop it in the socket, so it sticks to the acceptor magnet already fixed in place. I then take a blob of greenstuff and place it on the end of the weapon (as a side note I cut the back of the ball mount flat to give a little wiggle room).

Next, I wet the greenstuff to prevent it sticking in the socket, and push it in at the desired angle before pulling it out again, showing the impression of the two magnets thusly: 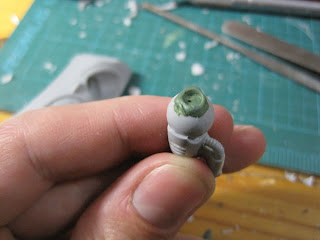 A small indent it drilled, using the imprint as a guide. The weapon magnet is then removed (being very careful to retain the correct polarity), and glued into the green-stuff bed. Repeat as many times as necessary. 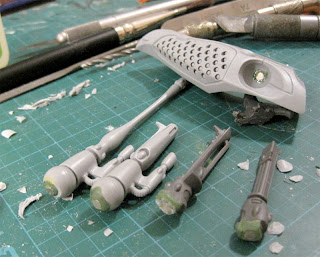 The Shuriken Cannon and Scatter Laser are taken from the Guardian heavy weapons sprue, with the backs cut off. I didn't mount the Missile Launcher or Bright Lance as the Phantom is neither lacking in missiles or anti-tank.