Arena of Death – Phantom vs Warlord

Gleefully ripping off from Claws and Fist’s series of the same name I present a deathmatch between the pride of the Craftwords, the sleek and shiny Phantom Titan, and the mainstay of the Adeptus Mechanicus Collegia Titanica’s Divisio Militaris, the mighty Warlord Titan.
Both are equal points, the dice rolls are real, the results are written down as they happen. 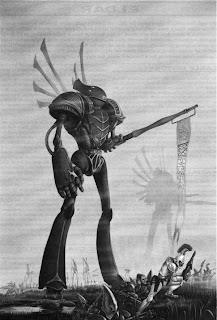 The Warlord will have a standardised layout for each match:

This is by no means the strongest, but is a good, balanced layout. The Phantom will be used with different weapon combos for effect.

The Warlord fires all its guns, the AML hitting with all shots automatically due to the Phantom’s footprint, and the other weapons all scoring hits.
Armour penetration is rolled, with the AML scoring a glance, and the Quake Cannon two pens. The five turbolaser shots auto penetrate.

Stationary Phantom (5++): Saves one QKC hit and one turbolaser. This gives it one glance and five penetrating hits (four with a +1 on the damage chart).

Moving Phantom (4++): I only managed to improve the roll by a second save against the turbolasers, not too much of an improvement.

The Warlord packed a hefty punch, doing a large amount of damage in a single salvo. Next turn the Phantom will be severely weakenedHardly surprising though. 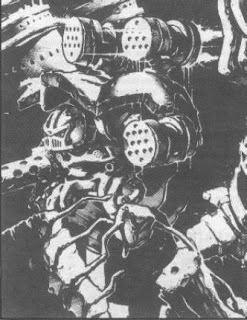 The Phantom fires its missile battery and pulse laser, hoping to take down some shields first. With some good rolling five void shields are taken out, allowing for the big guns to follow up:

Not bad, immobilising the sucker and knocking off one of his guns, as well as two SPs, somewhat reducing the Warlord’s ability to get his shields back.


Two Pulsars: All eight shots hit, causing seven hits (one needed to knock out his last shield). For this example I’m adding both the AP1 and StrD bonus to the damage chart.

A somewhat lacklustre round of shooting there, failing to do much in the way of reducing the Warlord’s immediate fighting ability, so come next turn it will be able to hit back with its full salvo of weapons (see Round 1 for how that’s going to feel).

So it is possible to ‘one shot’ a Warlord, but you need to be very lucky in both getting those Chain Reactions and taking down the shields. 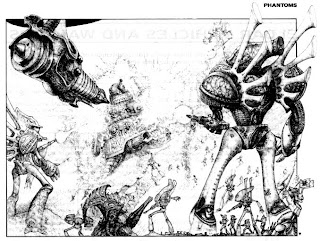 One Pulsar, one D-Cannon: All shots hit, though one Pulsar blast is used up on a shield. The D-Cannon does 2 hits, for a total of five rolls on the damage chart with two at +1, and three at +2. 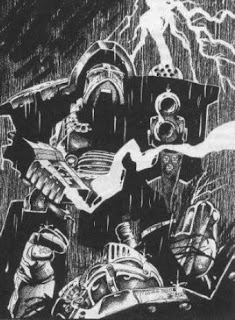 Phantom goes first, moving forward and firing its Pulsar, stripping off four shields. The Warlord remains stationary, firing all its weapons, totalling up two glances and seven pens (five with +1). The Phantom saves one glance, one Quake Cannon hit and two turbolaser hits.

As a note if the Phantom had moved all out and gotten a 3++ save it would have saved against four of the StrD hits.

The Phantom, robbed of the only weapon it can use at this range, shunts all the driver stunned results into Gun Crew Shaken ones (aside: does the attacker still chose the weapons? I’d say so). The D-Cannon, Pulse Laser and Missile Battery are now also stunned, so the Phantom cannot shoot at all next turn.

The Warlord regains its four lost void shields, and fires again – scoring the same amount of damage as last turn. One Quake Cannon shot is saved, as are four turbolaser hits (it’s like déjà vu all over again).

Damage is: Gun Crew Stunned x 2, Drive Damaged, Structural Damage.
The Pulsar stays stunned, but the D-Cannon makes its save.


The Phantom (turn 3) diverts power from the stunned Pulsar and moves an extra 7”, closing the range to under the magic 48” mark (44” to be precise).
Firing all available weapon systems it knocks out three void shields and hits three times with the D-Cannon.


The Princeps, angry at the pointy-heads’ impertinence, pulls up his shields (regaining all the lost ones) and fires his remaining weapons at the enemy. His anger seemed to do him no favours as he only scores four penetrating hits (‘only’, ha!) – the loss of the Lasblaster was a serious one.
The Phantom saves the Quake Cannon hits, but still takes the StrD turbolasers.


The Phantom (turn 4) hits back with all its weapons, knocking off four shields with the light systems, before the Pulsar takes out the last two and scores two hits. The D-Cannon does a further one.

The Warlord is now on 2 SP, Immobile, and fails to get its shields back online. It fires back as best it can, the turbolasers hitting twice, which the Phantom fails to save.

The tech priests pull up a solitary void shield and the crippled Warlord attempts to finish off its nemesis. The damage seems to have busted the targeters, as one of the Turbolaser shots goes wild, missing completely. The other hits though, and is not saved.
Damage done: Weapon Destroyed (D-Cannon, saved!). 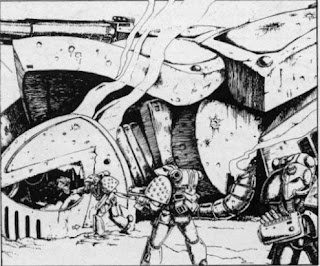 Victory to the Eldar! Though I think it was a very narrow one and had the Warlord had more average damage rolls in the first round of shooting it would have been over more quickly and decisively.

The Holofield save was nice, being able to stop a StrD attack without question, but too unreliable. Having to sacrifice shooting to keep moving (and keep alive) is a big offset. The Phantom can do tremendous amounts of damage, but a single Driver Stunned result can cripple it – either you stay still and weaken your defences drastically, or you risk losing half your heavy firepower.


The above battle was also fought in a vacuum, so the Phantom would have to be dealing with getting blasted by all sorts of light support weapons trying to stun it and lock it down. That would really be the best tactic – hit it with infantry heavy weapons to try and get some stunned and shaken results before concentrating StrD on it next turn. That way you’ve either immobilised it so its save is only 5++, or it won’t be firing so is out of the game for a turn really anyway.


Relating to my earlier thoughts on the beta rules, I think if it was able to totally ignore Driver Stunned results and the Agile movement was 6+d6” / 6+2d6”, and the secondary weapon ranges were increased a little it would be worth it.
If AP1 and StrD end up not stacking on the Superheavy chart though, the Phantom will be quite significantly weakened. Being able to cause SP damage/wrecks on a 3+ is a massive positive in its favour. 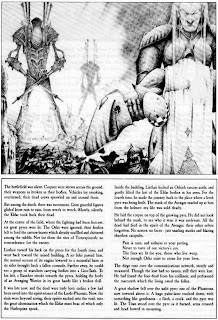 (click for larger version with legible text)
I ran a Phantom vs Reaver match too –it went something like “Phantom fires, Reaver explodes” (especially with twin Pulsars), so I won’t bother writing it up.


* the images are from Codex Titanicus, an expansion to Adeptus Titanicus and Space Marine.
Posted by Gotthammer at Sunday, April 10, 2011