Ciaphas Cain does it again - The Emperor's Finest by Sandy Mitchell

This book is a prequel of sorts chronologically, jumping back to before his time with the Valhallan 597th, after the events of Perlia and taking off directly from the short story Shadows of the Tomb (as in the short story could well be the first chapter for this novel).

Whilst obstensibly dealing with Space Marines, they are more background characters, with only three ever being named and the book focusses more on Cain's dealings with them and their mannerisms.

The writing is some of Mitchell's best, and a great improvement over Cain's Last Stand, who's "lol Necrons show up and kill everyone (again)" ending was particulary weak. Emperor's Finest, however has a great ending, and some of the sharpest dialogue yet, with Cain meeting his match in Mira, a governor's daughter who proves his equal in many ways. I personally found their relationship arc very well developed though (highlight text to read spoilers):

I thought the very last scene was rushed. For Cain to be so easy going about what had been a rather long relationship ending seemed odd - not that he wanted out but I expected Cain to be a bit put out he was replaced so easily.
I also felt Mira moving on so quickly to be strange as she took a while to truely warm to Cain and it semed to be more than her hunger for status driving her relationship with him (and his with her - he does comment repeatedly about missing her etc).
Probably could have done with another page there, but nothing major.


Only criticism of the book is that the footnotes, one of the series' signatures, were fairly lacklustre and often, to be frank, pointless. Many were simply explaining Cain's military acronyms which are used only once. When the acronym is only used once, and there is no witticism from Amberly to acompany the footnote, having it abreviated and noted seems silly rather than just spelling it out in the first place.

But, a minor quibble - I still rate the book highly amongst the Cain series, and this one gets bonus points for a hilarious Casablanca reference.

Die For The Emperor - Dead Men Walking by Steve Lyons.

Again, while the book's focus is on the men of Krieg, they are only observed and never the focus for the narative's perspective. The perspective mostly comes from an attached, and somewhat jaded, Commisar; the planet's Governor and a pair of seperated lovers.

The book is flat out one of the best Black Library books I've read. It doesn't stuff around with nobody knowing what the Necrons are (well, the civilians don't, but the Guard do), there's no achingly long battle scenes that don't advance the plot (there are battles, but they provide character development), and the characters are all unique and have little overlap in function.
It is brutal and bloody, but not needlessly so as to feel cartoonish or ghoulish but successfully conveys the horror and confusion of the Necron attacks.

My only criticisms are that some of the dialogue between Arex and Tylar was rather odd - they were talking in a slightly crazed manner and totally different to everyone else. It wasn't bad, and worked in the circumstances, but it was never really explained.
The other would be the overuse of the word 'flensing'. No cutting, slicing, carving - it was all flensing, all the time.

Also, when I first read the name Arex all I could think of was Team America (probably because I've been watching 30 Rock recently and whenever the credits are on and Alec Baldwin pops up on I say 'Arec Barwdwin' to my girlfriend).

Now for a couple of spoilery points (highlight to read):

Arex's relationship with Tylar felt a bit forced to me, but I'm not quite sure how to put it into words. I think it might be because of the very last scene when Arex is hit by the bottle and Tylar scowls at the crowd. That just seemed like such an odd reaction, for him to react the way it was put. Their connection was based on going through the shared trauma of enslavement and Arex notes that where she was leaning on him before (and still holding out hope for Gunthar) they were later relying on each other for mutual support and she resigned herself that Gunthar was likely dead (I saw it as a mirroring of her hope that Tylar's strength was reflection of Gunthar's, and seeing Tylar's spirit broken made her lose hope that the more timid Gunthar could have survived).

When they were leaving it seemed to return to the position of Tylar being 'the strong one' in the relationship, protecting and scowling and all that, it felt like a quick recovery for him. It was also a very douchey thing for him to do, as previously he'd been very sympathetic and caring, and now he's scowling at people being left behind? The same guy willing to blow himself up with a grenade a few chapters ago?

That weird out of character moment probably made Gunthar's seeing them together more painful, along with his one man last attack at the end. I'd been hoping all book that he would have won out, or Arex would have at least learnt of his efforts (for instance she got to the Krieg HQ and heard of Trooper Sorensen going missing in the attack or somesuch). Personally I would have had Arex and Tylar learn of Gunthar's efforts, and maybe even see him at the spaceport but not have Arex and Tylar together - something like Gunthar manages to give Arex the ring in the crowd, but she's pulled away by the Krieg guardsmen onto the transport. More bittersweet than the somewhat depressing ending as is, but that's GRIMDARK for you.


All up though, a great read and one of my top 40k books.

The Wych squad is proceeding quite well - they are however much more time consuming than the Warriors with all the skin and such. 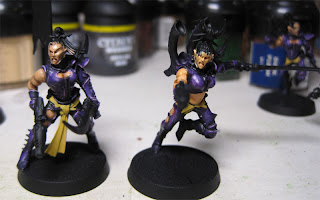 Both have a blast pistol and agoniser (I'm using the swords instead), but one has a phantasm launcher.

Group shot of the squad: 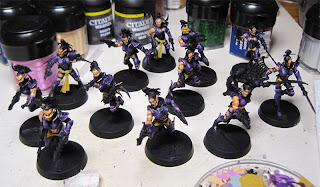 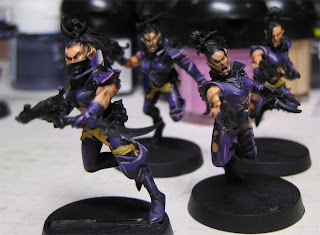 As opposed to the warriors I'm giving them yellow tabbards rather than black, mostly so they're visable at a distance rather than looking like a black smudge. 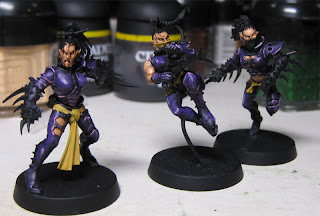 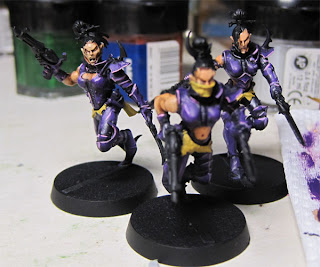 Hope to have them done in the next couple of days, then on to some Reavers.
Posted by Gotthammer at Tuesday, December 07, 2010 No comments: