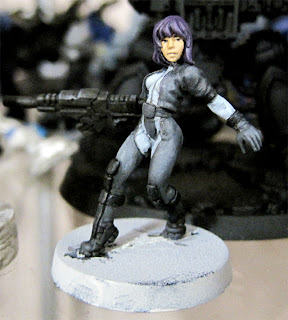 Finally painted up Tomoko (ie Major Kusanagi of Ghost in the Shell) by Hasslefree, in similar colours to her Stand Alone Complex guise. I think the shading came out very nicely on her jacket and bodysuit.

Here she is with the Firebrand Conscript I posted earlier. I kept the Major clean and smooth with a limited colour scheme to show her as a more professional fighter opposed to the Firebrand who is grittier and more thrown together. 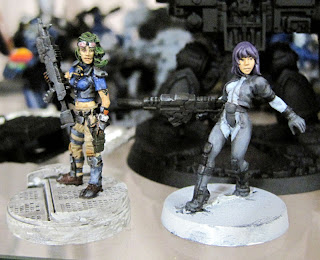 She doesn't yet have a base as I'm going to give her a Sedition Wars one when they arrive to make her match the rest of my 'hard sci-fi' type minis.

Funnily enough Hasslefree put up a clear resin version of her, then sold out, while I was painting her. Oh well, I'll try and get one from the next run.


I've also been working on Vissarisa: 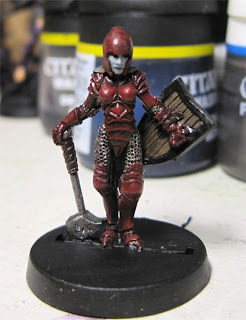 I still need to highlight her tabbard, face and give her shield a crest, but otherwise she's almost done.

I'm also trying (fairly unsucessfully) to fight off lust for the Phantom Titan. I'm thinking a dark greenish-blue colour scheme with glowing tracery over it, TRON Legacy style. I've played around in photoshop with the preview pics and I think it could work.
Posted by Gotthammer at Tuesday, March 29, 2011 No comments:

Here she is completed. Bit of a naff picture though, but that's what taking photos at five in the morning gets you. 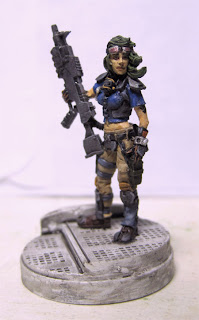 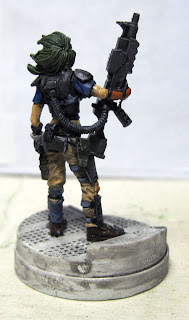 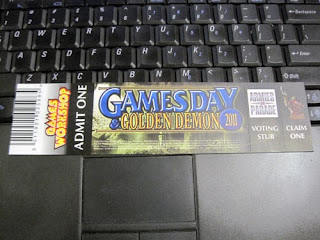 After a painting absence of several months I've put brush to mini again, starting on my Sedition Wars minis. First up is a Firebrand Conscript: 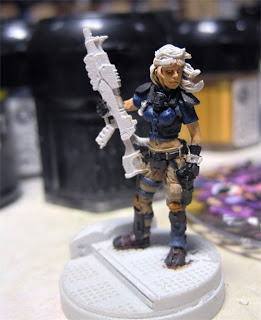 I'm giving her a fairly mish-mash colour scheme on purpose. The concept is she is in civillian clothes (blue tee, khaki cargos, brown hiking shoes) with added on armour. The armour is dark grey with blue-grey strapping aiming for a riot cop type scheme.
For the gloves and respirator will be painted up with garish orange or yellow to give the impression of civillian gear.

I'm not decided on how to paint her gun or hair yet. Part of me wants to give her some really garish dye-job - green, purple or the like - but I'm not too sure how it'll work out.
I don't want to go black or metallic on the gun, though I don't have much of a choice really. End result will probably end up being a different shading technique or somesuch to differentiate it.

The models themselves are the usual super-high quality of Studio McVey (I got them all in resin, though metals are out now for the Vanguard line). As an example one of the Vanguard troopers has a backpack: 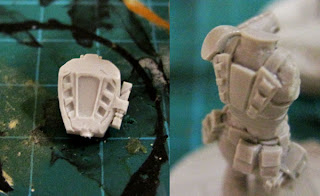 The only figure I had any trouble assembling was Akosha Nama (the sniper) due to everything basically needing to be glued in place simultaneously and my only having two hands.

Also today my Jaggernat arrived (or at least I noticed he was on the front step). He's a big boy: 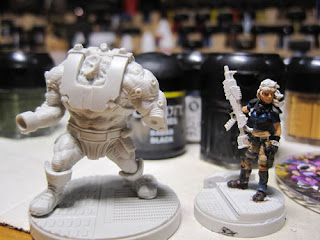