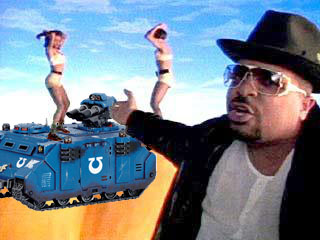 I like small tanks and I cannot lie,
You other brothers can't deny,
That when a girl walks in with an Battlefoam Case,
And a Razor list in your face,
You get sprung!

Ooh, she’s Raz-o'-back-in,
You say you wanna Pitch Deploy?
Well, Flank Refuse me, Refuse me,
'Cause you ain't that average groupie.
I've seen them glancin’,
To hell with lancin’,
She's sweat, wet,
Got it goin' like a Melta 'Vet.

I'm tired of magazines,
Sayin' fluff-bunnies are the thing,
Take the average blog man and ask him that -
She gotta pack Razorbacks!


(Demon paint on an ‘ard Boyz booty)
Baby got ‘backs!


I like 'em small, and on wheels,
And when I'm clubbing a seal,
I just can't help myself, I'm actin' like an animal
Now here's my scandal:
I wanna get you home
And ugh, double-up, ugh, ugh
I ain't talkin' bout Comp Score,
'Cause playin’ nice is such a bore,

I want lists tuned, tricked-out and nasty,
So bring that Leaf Blower,
Mix-a-Lot'll knock it over,
Gunnin’ for a place at that top table.
So I'm lookin' at bat-rep videos
Fluff-bunny carebares playin’ like schmoes,
You can have them newbies,
I'll keep my opponents like Kirby,

A word to the WAAC soul players, I wanna get with ya
I won't cuss or hit ya,
But I gotta be straight when I say I wanna *win* -
It’s the way I was born.
‘backs got it goin' on,
A lot of wimps won't like this song,
'Cause them punks like to hit it and quit it,
And I'd rather stay and play,
'Cause I'm long, and I'm strong,
And I'm down to get the RazorSpam on!

So, ladies! {Yeah!} Ladies! {Yeah}
If you wanna roll trip Land Raiders? {Yeah!}
Then turn around! Stick it out!
Even Jervis has to shout
Baby got ‘backs!


Baby got ‘backs!
Yeah, baby ... when it comes to army lists, White Dwarf ain't got nothin',
to do with my selection. Vanilla Captain? Ha ha, only if he’s on a bike.


So your girlfriend rolls a Rhino, lovin’ to not move and fire fro',
But Rhinos sitting still are just time bombs,
My army list don't want none,
Unless you've got guns, hun,
You can do Storm Ravens or Dreadnoughts,
But please don't lose that ‘back.
Some brothers wanna play that "comp" role,
And tell you that the ‘back ain't gold,
So they toss it and leave it,
And I pull up quick to retrieve it.

So BoLS says Sisters 're back,
Well I ain't down with that!
'Cause the ‘dex is small and Faith is stinkin’
But I'm still thinkin' bout switchin’,

To the metal dames in that magazine:
You ain't it, Miss Thing!
Give me plastic, I can't resist it,
Lead and FineCast just miss it!
Some knucklehead tried to dis,
'Cause melta-spam girls are on my list,
He had game but he chose to nerf 'em,
And I roll up quick and table 'im.

So ladies, if the ‘back is around,
And you want a win at all costs throw down,
Dial 1-900-MIXALOT,
And bring them nasty thoughts,


I posted this in the comments on BoLS for some reason, so decided to share it with you all.
Posted by Gotthammer at Thursday, August 11, 2011 No comments:

So it appears I forgot to post pics of these guys finished: 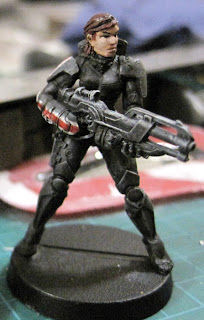 Commander Shep Shepard, paragon Earthborn Soldier.
Base model is an Infinity Pan-Oceanea Orc Troop w shotgun. Pity about the shotgun as I mostly use an assault rifle in ME, but no biggy. 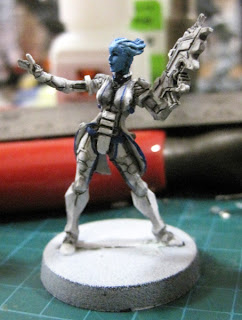 Dr. Liara T'Soni
Infinity Alpeh Sophotects with her assault rifle cut down and a bit of greenstuffing to add some more accurate straps and torso armour.

Tali'Zorah vaas Normandy
Infinity Haqqisslam Odalisques, with a rather large amount of modification.
Posted by Gotthammer at Friday, August 05, 2011 No comments: