Phantom Titan build pt5: Torso and Mounting to the Base

First step in the torso assembly is to pre-paint some of the parts. This isn't detailed work by any stretch of the word, but undercoating the sections that will overlap. This is becase some areas may not be accessable to paint at a later date, but will still be visible from certain angles, and having grey show through would not be a good look.
As the Phantom's base colour will be black I'm just using Chaos Black spray, but if it were to be a different shade or colour I'd use that instead.

Through a combination of dry-fitting and reading the instructions it is fairly easy to determine where the most likely problem areas will be.
It is not enough to simply spray the part in question in total as the coat of paint will prevent the glue sticking the parts together as well. To combat this I use painter's tape to mask off the areas where the parts will join before spraying: 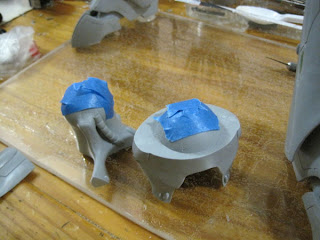 The parts are the then sprayed, leaving clean sections for gluing: 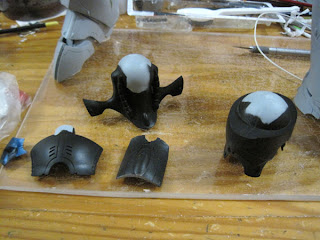 While they dry it is time to mount the Phantom to her base. I'm doing this now as with the addition of the wings she's going to be extremely back heavy, so for work to continue she needs to be able to stand. It's also better to mount the model now before it becomes too unweildy, fragile or heavy.

I'm using 2.3 x 50mm nails for the heels, and 1.8 x 40mm nails at the toes. The base is made from two pieces of 3mm acrylic sheet glued together. They are effectively laminated to each other by copious quantities of glue (and left overnight under a stack of Imperial Armour books and a bench grinder), so are very rigid. 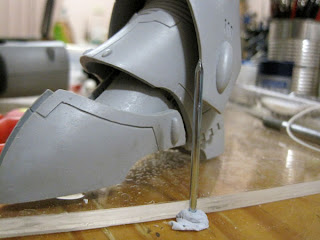 The pins are drilled, the toe holes being cut at an angle to go through the outer toe into the inner section, to give the maximum depth of penetration. 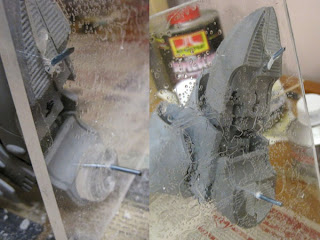 Once I was happy with the depth and angle I glued the pins in place and left to set for a moment, before beginning the pinning of the torso.

To start with I positioned the lower torso where I wanted it, and drilled a hole down through it (holding it in a clamp), and a matching hole into the waist. I'm using the same 2.3 x 50mm nails as before, and they are long enough to go into the waist, through the lower torso and out again, so there was no need to pre-drill of mark the holes. 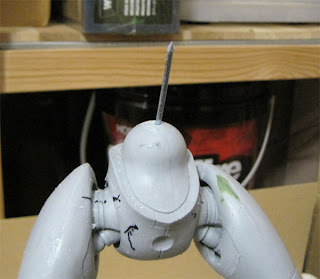 The next step was to hold the lower torso and centre torso in the position I wanted them, and push the nail through the hole from the bottom. This left a mark on the bottom of the centre torso, showing where the pin would connect the two parts. It was only a join of a couple of mm, but enough to hold the parts in position to each other. 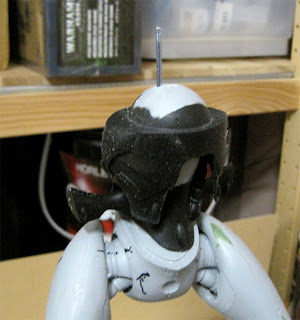 It is important to note that nothing has been glued yet - I still have the freedom to change anything if I so wish, as once the glue goes on the model is not going to come apart without some serious destruction.

Next up I simultaneously put the centre and upper torso parts in place due to their interconnectivity.

After they were dry, I put two more pins in, one in the lower torso into the waist and one in the centre torso, both going front to back. This was just for a little more stability and security, as more is certainly better than less. 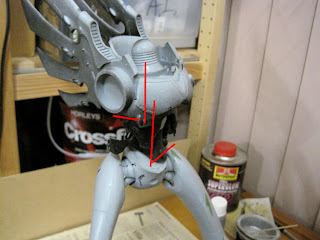 Pins shown in red - Marcin's idea of armature must have buried itself in my brain.
As a point of interest I affixed the large wings before mounting the upper torso. I did this purely to give me a better feel for the model's final pose, so I wouldn't say it's purely personal preference if they go on before or after torso assembly


One very important step I performed here was to get out the vacuum and go over the model and work area to remove the dust. There was far, far too much to simply brush off and since some of the next steps involve more pre-painting getting her clean was important.


Here she is posing with a dry-fitted shoulder assembly, missiles and noggin (which will be the next areas worked on):