Continuing the upwards climb it was time to start on the legs. As I'm posing her in a "sort of a half turning back as it fires thing" both feet will be on the ground. This has advantages and disadvantages:

Cons:
- Can end up a more staid, boring model
- PITA to get the whole thing lining up right and stay level.

That second con is the big one. If I'm going to have both feet firmly on the ground (or at least close enough) the whole leg assembly needs to be put together very precisely. Unfortunately that is rather challenging due to the models very flexible design.

To try and overcome this I formulated a plan: get the whole right leg into position, then carefully build the right one from that. With lots of dry fitting and wishing I had Dr Octopus arms I arrived at the pose. Marking the postion of the pieces with a sharpie I began at the right ankle, pinning it in place (using The Inner Geek's greenstuff marker method). After that I put the knee into position. 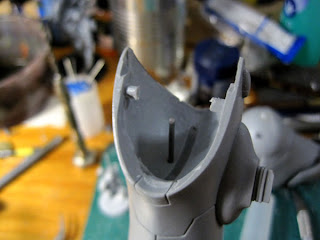 Mounting the upper leg to the knee joint was looking problematic. To allow the full range of motion the upper leg has a large void space where the knee piece can slide into. Problem is that this gives a very small contact area and not much to pin into.

To solve this I put a pin in the knee thusly: 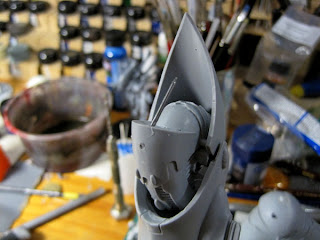 On the inside of the upper leg I put a corresponding hole and placed a wad of greenstuff around it, so the joint is braced more heavily: 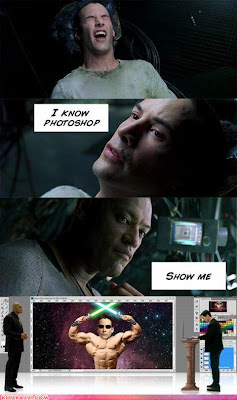 
I now had one fully built leg: 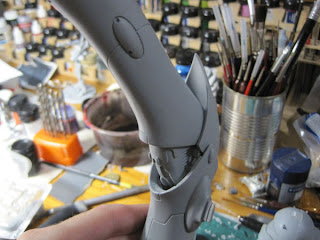 And since I've been asked about it, this is how I left it to dry: 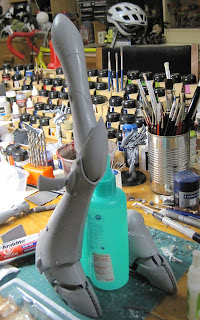 To continue the build the right hip and waist were glued into position, and then pinned in place. I simply eyeballed their position, setting them level with the leg turned out slightly.

Once this dried enough I was able to dry fit the left leg assembly so the model stood standing. Gripping the hip in place (being very careful) I drilled pin guide holes into the waist: 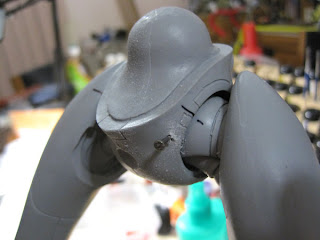 This gave me the correct position to glue the hip piece in, then I did the same on the upper leg. To make sure the lower leg correctly mated up with the foot and upper leg I fixed the knee in place to the lower leg first, before gluing both remaining joints simultaneously.
Doing it this way allowed me to wiggle the parts a little to ensure the feet remained flat on the ground.

"But wait - how could you move the parts? didn't you pin the joints?"  I hear you ask.

No, these two joints I pinned after the fact, the knee from the back and through the kneecap, and the ankle on the side and rear.

Now the main structure was set I added an extra pin to the right knee, through the kneepad, and vertically at the waist. Pinning the joints on two axes inhibits the motion on all three. So for instance the first pins on the waist (running front to back) wouldn't have stopped the legs splaying out to the side, but the ones going up/down compensate for that. 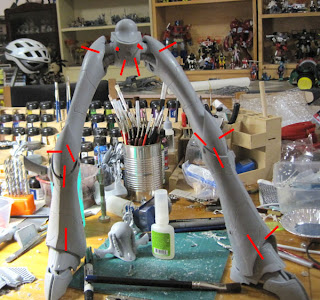 Next up: Torso and pre-painting (dry fit shown below) 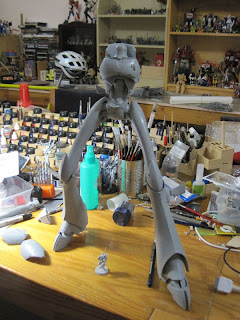