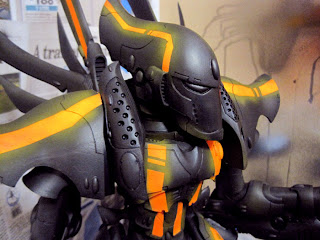 More like PhanTRON.
Obviously it took a couple of steps to get to this bit, but it's a good opening pic. First thing was to set up a spray booth, a much more significant effort for something the size of the Phantom. Second step was to re-coat her with Chaos Black using the airbrush. Why the re-spray when I'd already based her? Firstly there were still some small spots that were missed, such as between the fingers, and the Chaos Black spray is matt, while the stuff from the pot has a slight gloss to it, and if I need to touch up with a brush it'll stand out much more.

After the black coat is finished I used Charadon Granite in the airbrush to lay down some bulk highlighting: 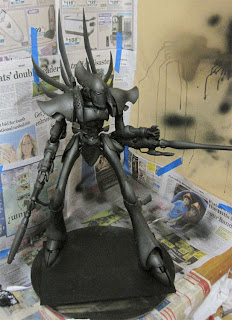 I chose Charadon as it has the slight greenish tint to it, avoiding the model looking too flat and lifeless (being a giant block of black and all). I applied a black wash to some areas after the Charadon had dried to give a slight change in tone to some areas.

Then the fun of taping out the lines: 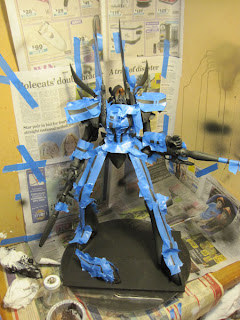 This took around 45 minutes to complete. Where possible I used references such as the lines in the armour or ridges as a reference to keep symetry.
The lines were sprayed in white and then Spaz Stix Fireball Orange: 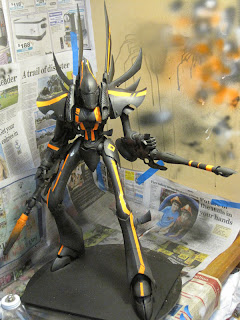 The glow effect was achieved after the tape had been removed by spraying orange lightly around the areas.

But before I could do that I had a near disaster, as quite a few sections had paint come away, as can be seen in the picture above (note the right thigh and rear of the helm). At first I grumbled a bit and assumed it was just loose and peeled off. Unfortunately, I discovered this was not the case.

The sections missing paint were oily in the extreme.

Obviously this was a big problem. Now it was likely not due to mould release grease as I had most definately cleaned the parts thoroughly. It was likely due to an unfortunate side effect of resin's makeup. Resin is a two part mix, much like greenstuff - only liquid, and sometimes it doesn't get mixed evenly. This leads to the resin seeming cured, but still being in a semi-set state bleeding the excess compound.
There was a great article discussing it a few weeks ago but I couldn't find it - long story short there's nothing to be done about it save keeping fingers crossed that it sets soon and doesn't do any more damage.

This is of course worrying for the next stage of painting where I'll be detailing and highlighting by hand, so any bad spots could get stripped by an errant brushstroke.


To ease that worry I was fortunate enough to pick up my vintage Nausicaa poster (original release, mint [not even blu-tac marks or pin holes]) from the framers today, so she's now hung on the wall next to me. 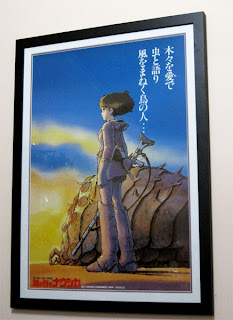 Next up: More painting, or a whole lot of swearing if it all goes wrong. I may do an interlude on naming the Phantom as it will take some time to have enough done to be worth posting.
Posted by Gotthammer at Friday, May 06, 2011