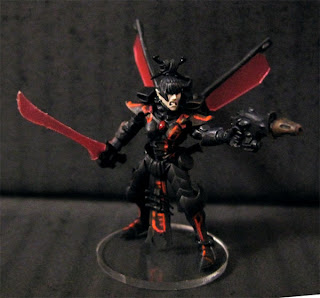 Made using the Forge World Corsair kit, Dark Eldar Warrior sprue, Guardian sprue and the cover of a document folder, styled after these guys: 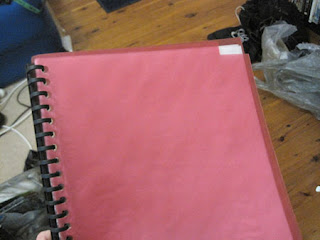 Close enough.
It was a simple matter of cutting out the vanes from the wings, attaching the struts to the model, painting the model, then gluing in the plastic. 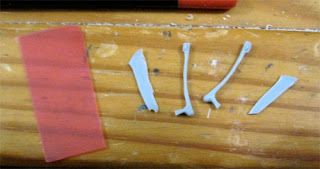 The struts needed to be heated and bent down as the glue was put on so they stuck, as they are naturally curved. I didn't fancy my chances of cutting the plastic to match the curve.

The plastic also has a nice rough (but fine) texture to it, so it matches the pattern from the movie - kinda. I tried experimenting with inks and such to bring the pattern out, but to no avail. Still, it's a very good effect for $2.
Posted by Gotthammer at Sunday, May 08, 2011