Due to the pose I'm using the head/cockpit/helm/bridge/noggin is turned to the left. This means that despite being hinged the outer casing wouldn't be able to open.
My initial thought was to magnetise the neck joit so when I wanted to open the head I could turn it and operate the mechanism. My second thought was to not bother and just take it off to reduce the amount of movement and wear.

So I haven't assembled any of the hinge mechanism aside from the pins on the cowling, as they are aesthetic as well as functional. However, if I were to assemble the mechanism I'd replace the hinge mechanism with something more durable than resin, such as brass or acrylic rod and a metal ring.

Instead of doing that, I decided to customise the steersman, and in keeping with the TRON theme of the titan I chose to model the pilot on Quorra: 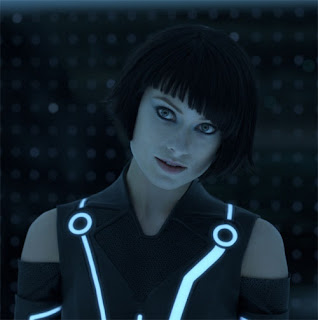 First step was to remove the previous occupant. I used my dremel with the large engraving tip, which made short work of his head. After that I removed his spirit stone and part of his shoulder strap thingy.
I selected a Hasslefree head, and mounted it on a pin, drilling a corresponding hole in the neck: 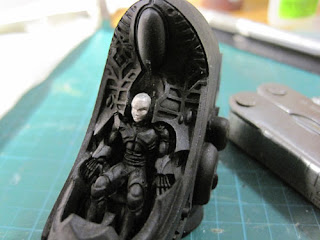 After getting a good fit I removed the head and, holding it in my pin vice, sculpted the hair on. I was careful to keep the asymetrical cut (it's longer on the left, most noticable on the fringe) and when I was happy added a neck and glued it in.
Then I did the basics of the chest armour and shoulder strap: 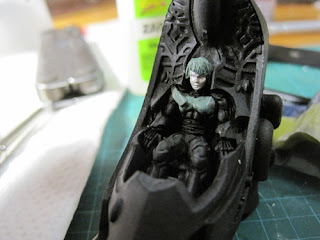 I made a fairly obvious mistake here: I didn't prime the head before fitting it, so couldn't get to the back of it to paint the hair (d'oh!). Luckily she's got black hair, so it was an easy fix, but it could have been very bad.
Brain farts aside, I finished up the armour and added a spirit stone: 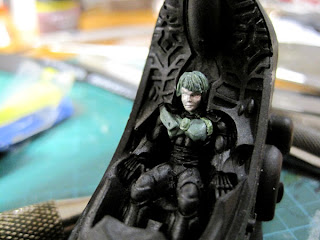 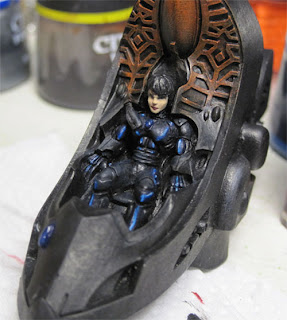 The blue lines need to be lightened more (they are closer to a whiteish aqua in the movie than pure blue), but I'm having trouble sourcing the white paint I need and as it's a lethal alcohol based paint I can't just mix with acrylics. It's not a big deal (yet) as she looks ok, and it is easy enough to go back over the lines at a later date.

I added a HUD made out of a blister pack cut to fit, painted with Spaz Stix neon paint, and glued it to the dashboard, which was stuck in place: 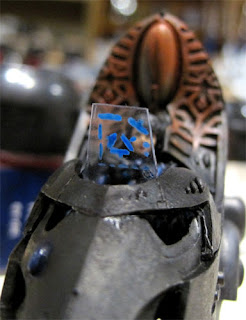 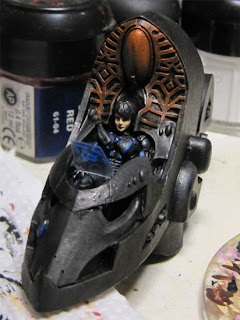