So begins the first part of the structural build. My weapon of choice for gluing the main sections is Araldite, a two part epoxy. I use the 5 minute quick dry version for obvious reasons. 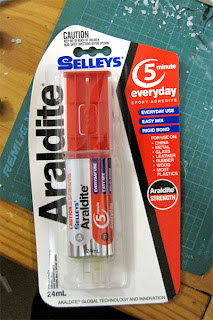 For the assembly I glued all the parts save the heel and heel connector together before pinning. This allowed me to get the parts into the correct position without worrying about lining up holes, as the unit had to prettymuch be put together all at once due to the way the plates overlap.

After the glue had dried I got the dremel out and drilled holes into the foot module as deep as was possible. I'm using nails as my pins - they are strong, not too thick, and can be hammered in easily if they need to go that extra millimetre. It was not always possible to drill the complete depth of the nail, so it needed to be cut short.
To make sure I was cutting the correct depth I inserted the nail, marked it with a sharpie as seen below, and used that as a guide for where to cut. 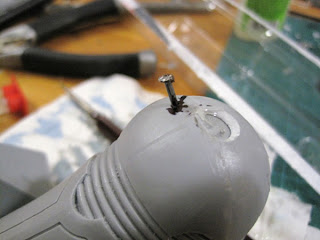 The hole is due to an air bubble
Zap-a-Gap was dripped into the hole and the shortened nail inserted in place. As I mentioned before if needed they could be gently tapped a little deeper so they ended up flush with the kit.


These are the main points of connection for the foot, though the front ankle plate also connects to the toe ball. 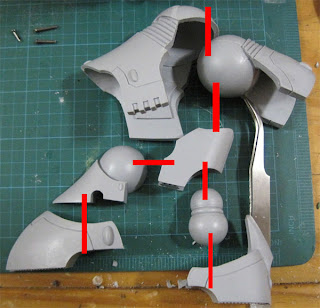 The feet are the most complex area of any Titan kit, with the largest concerntration of variably positioned parts and the greatest number of components. They are also vitally important as the positioning of the feet will play a large part in the final pose of the model.
If not familiar with a kit such as this it would probably be best to start on another section first. Luckily for anyone contemplating an Imperial Titan the feet are, while more fiddly, easier to pose due to having a sturdy foot plate everything attaches to. 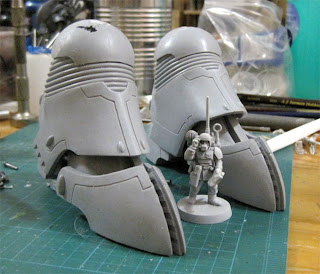