Here begins the chronicalling of my Phantom Titan build. I'll be detailing it step by step as the weeks go by, from the very early stages to the finished piece. Hopefully this will not only prove useful to anyone else considering a Phantom, but to other builders of Titans or Forge World kits.

The first step is to sort and clean all the parts. The instructions come with a numbered diagram of the parts - actually the body comes with an inventory, the weapon arms do not, so I must assume all the parts are present.
That said, the first step is to sorty the pieces and check them off against the list, also checking for any serious defects such as missing plugs or major warpage. I found none, much ot my relief. 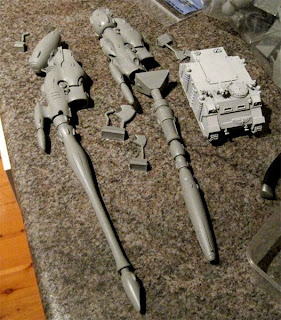 I also trim any large bits of flash, though some are so large to require the use of a dremel (such as the D-Cannon's barrel above), so I leave them for now. Similarly and small pieces, such as tassels, view screens and the like are left on their tree so they don't go missing in the next stage. 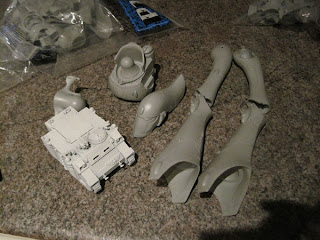 The actual cleaning is done by running hot water into the sink with plenty of detergent. The bits are then dumped in and left to soak. I left them for around ten minutes before coming back. Pulling them out I went over them with an electric toothbrush, scrubbing out the recesses particularly, befre rinsing them under running water to wash off the soap residue. 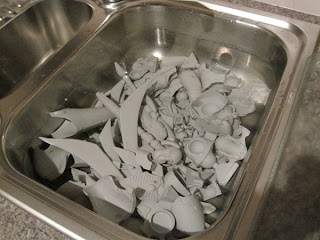 This is a vitally important step. Resin must be cleaned thoroughly to remove any traces of the mould release agent, or paint will not adhere properly to it and that would be very bad to discover right at the end of the project.
I had a few parts come out a little greasy still, so I washed the whole lot a second time (yes, all of it - taking no chances). Seems to have done the trick.


There will be some leftover resin trimmings: 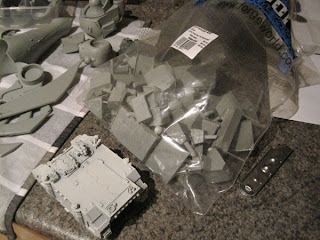 Next up, cleaning the parts and dry-fitting.


Also been working on the rest of my Trondar, with the aim of getting them ready for Armies on Parade in September, and with any luck on to Games Day Sydney (which I will be attending, woot!).

Converted up a female Farseer to lead the mob: 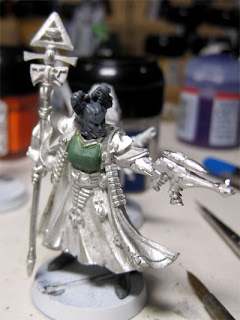 Dark Eldar head, and removed from her scenic base. It was easier to chop off her feet and attach new ones from the guardian sprues than to try to salvage her originals.

I kept the wraithbone breastplate simple for two reasons:

1) I'm going to have it glowing so I decided to make it bold to stand out.
2) It's easier to sculpt that way. 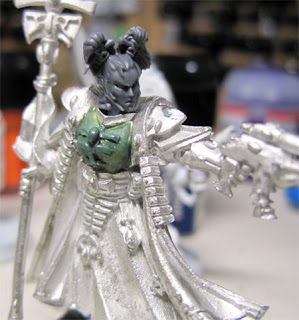 One side effect of her new feet is she's now really tall - as in a head taller than everyone else: 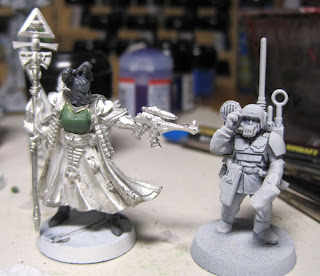 Works well for the HQ, I think.

And here's a finished Banshee, with neon paint applied: 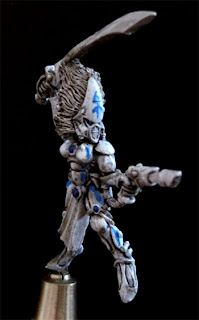 Unfortunately it doesn't show as well here as in person, but I'm very happy with the results.
Posted by Gotthammer at Thursday, April 21, 2011