Glow in the Dark test 01

So to follow up from the previous post I've tried a few different methods, including ink, water, isopropyl alcohol and different paints: 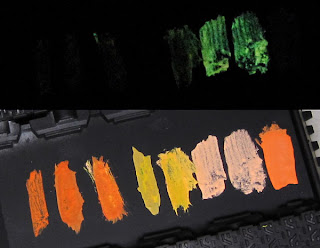 The best glow effect is from the pigment with water / alcohol, the good yellow one is from using sunburst yellow.
The trick is that the pigment isn't soluable, so getting the right amount of pigment to make a glow vs not having that horrible salmon colour is a bit tricky. Also it needs to be smooth enought to paint consistently with else the glow will be uneven.

Still, not a bad first trial run. I'll do another when the neon paints arrive.


On a related note I'm actually kinda pissed at Forge World right now, as "AdeptiCon attendees will be able to advance order the mighty Phantom Titan for despatch well in advance of the pre-order date" (from the newsletter).
I can dig Open Day getting cool stuff, but when it spreads outside of that it is basically a punch in the gut to loyal FW customers outside those attendees - "you like cool stuff? Too bad! You can wait because you're on the other side of the world!"

Keep in mind this was announced two days before AdeptiCon, which sold out ages ago, so it's not like there's any way to do anything about it unless you were already going.


Sent them an email asking for an approx release date and expressing my displeasure at the policy (though with less hostility than above). Australia gets screwed by Games Workshop all the time - look at the prices we get charged here* - but when Forge World does it, it's too much. If I don't get a reply by Monday I'm going to phone them.