Divisio Militaris: Is the Phantom worth 2500pts?

So the Phantom is up for pre-order now, and the experimental rules are online to go with it (if you are not familiar with them already give them a read, as I will obviously be referring to them a lot). 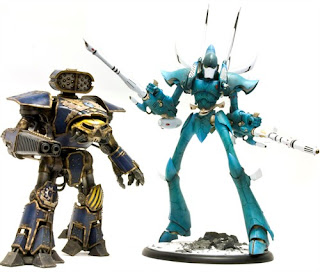 Personally, I think it's overcosted for what it does. The current rules should be somewhere between 2250 and 2000, relative to other Titans.
A Warlord is 2500 and, while it would take damage (possibly a large amount at close range), could kill a Phantom more easily than the other way around. The extra movement and holofields the Phantom recieves is in no way comprable to six void shields and AV14. This isn't even comparing damage output, though the difference there is not as accute.

13/13/11 is good, and what I'd expect from an Eldar titan. The Enhanced Holofields are good, but giving up all shooting for only 3++ (sure, it's the new black, but still).
3++ is good, but for a titan to give up shooting its main guns it's not that good.

Holofields are also much more unreliable than Void Shields. For example a Warlord can take six hits from whatever before being damaged, but one krak missile could (theoretically) destroy the Phantom.

My version would be:

This may sound a lot, but the difficulty of moving a titan with a 12" diamater footprint on a crowded Apocalypse table is a large one - this one can't jump like Revenants so has to have a large clear space to move.
The two brackets on the regular move is to stymie the cheesy "I moved my revenant 1/4 of an inch so I get a holofield save" stuff - if you want a better save you really have to work for it.


Being able to pass a Driver Stunned result on to the gun crew is possibly the worst idea ever in my opinion. I want my titans shooting the bejeezus out of everything in sight, not moving (I sometimes think they could do without legs at all personally).

If it was simply an ability to swap one for the other or vice versa it would be great - that way you are free to choose to lump all your Gun Crew Stunned onto your driver, or keep moving no matter the cost to your firepower.
Alternatively just have it ignore Driver Stunned entirely.

It seems the desigers (across all the IA and Apoc books) overvalue boosts to movement compared to how much they get used. The Agile / Fleet ability is terrible - sacrificing firing a four shot StrD weapon to move 2d6" extra? Well, it's not the Warhound's D6" at least.
If it was 6+d6" and 12+d6" it'd be better.
I'd hate to forgoe obliterating something to move an extra 2"... it's actually rather embarrasing to move a titan that little a distance.


So, if the total points are going to be taking the agility and speed of the Phantom into consideration (which it certainly seems) I'd give that extra movement more certainty.
As a late random thought maybe even a Jet Pack style move in the Assault phase. It'd allow for some limited moving back into a more defensive stature after firing and be something very unique.
Even more crazy would be if the Phantom didn't move in the movement phase it could take its normal move in the Assault phase, allowing for some seriously cunning maneuvering.

The Phantom Pulsar is dead killy - two of those would very likely wreck a Reaver in one turn, or at least cripple it horribly (but being +50% the cost you'd hope so!). I would not change this at all. If the AP1 stacks with the StrD bonus on the Superheavy damage chart, then this gun is even better. I've not seen anything to the contrary, but it is a grey area.

The D-Cannon is brutal, and I think the range works well. The weapon is comparative to the melta cannon, so having an equal range works for me. The D3 damage vs Superheavies is especially dangerous, though it should probably have something against Gargantuans (D3 wounds).

The ranges on the secondary weapons feel too short though. The AA is ok as a point defence and aside from a Lightning or Vulture strafing with Hunter-Killers most aircraft will have to close into range to fire.
Increasing it wouldn't hurt, especially if the "Summer of Fliers" comes to fruition and every man and his dog has a Thunderbolt.

The ground attack missile pod feels too short though, and doesn't mesh with the main guns. It's primary purpose would be either killing light to medium armour or stripping sheilds. The problem is with a 48" range you'll have pummled anything with your longer range main guns or a close in target worth your titan's attention will be needing more firepower than four S8, AP3 shots.

I'd give it the following profiles:

It has dual purpose now, giving the Phantom some anti-horde infantry and more synergy with its other weapon systems.

I'm sure it will be changed but at the moment the Phantom's Towering Monstrosity rule as written doesn't preclude any close combat weapon arm, when / if such a weapon is made, from striking a 'normal' vehicle. The ability to make StrD attacks at I3 against normal infantry would be a very strong one but, given assault is the last place any non-Ork titan wants to be (and it would mean sacrificing a gun) I wouldn't put it as a big pro.

If the Phantom's going to cost 2500pts one of three things needs to be done:

1) Improve the holofields, or at least make sacrificing shooting worth it. Make any 'bonus' movement more reliable or more easily used.

2) More than two long range guns - getting closer is a bad idea and those shiny missile launchers should be more of a threat.

3) Make Imperial titans cost more. Not a likely outcome, but the mark has been set by which others are measured and the Phantom comes up short when compared to these guys (but so do the Nid GCs).

The Phantom hits hard - very hard, but not hard enough to justify the price tag points wise. It's very good at killing superheavies, but not much else. Toe to toe with a Warlord, it'd be a close (favouring the Imperial due to survivability), but against a mixed force the Phantom doesn't have the same massive 'oopf' as comparative superheavies.

For the same amount you can get five Scorpions that have almost double the Structure Points between them and more StrD shots - they'll also be getting a 4++ save. So either beef the Phantom up, or bring the price tag down.


I vote for more destruction.
Posted by Gotthammer at Saturday, April 09, 2011