Glow in the Dark Test 02

My Spaz Stix paints arrived today (supplied in Australia by Qikazz), so I gave them a test with the glow powder.

The top three are yellow, orange, and fireball orange mixed with the pigment over white. The three on the left are over marcharius orange. 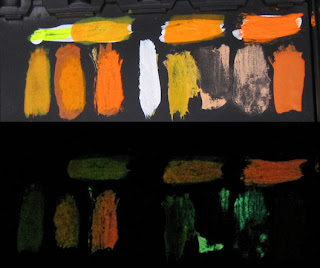 The clear winner is Fireball Orange over either colour in terms of glow, but the plain orange looks a bit better in daylight. The issue here is obviously that I was planning to black and yellow.
So I'm thinking of doing two sets of lines - yellow ones by hand with citadel, and larger orange ones with the airbrush. The Spaz Stix line is nasty airbrush stuff (nasty as in it is carcenogenic and has a warning label on it stating just that - wear your respirator!) so any use of a brush needs to be cleaned with thinner like enamel paints.

Problem there is the pigmented paint is 99& likely to gum up an airbrush. My thought is to airbrush a base coat down then hand paint on the glow sections over the top. This would have the advantage of making the glow slightly irregular and allow me to do false shading by not doing in the recesses and such.

Here's a shot from six feet away: 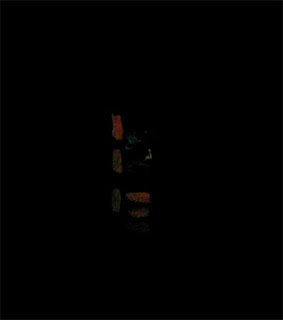 The glow is quite effective on just an hours charge by lamplight, so it'd be pretty good after a fair bit of daylight I'd imagine.

Current thought is to do a 'fake' glow with citadel paints as a base, tape off the main section, spray white down, spray orange over that, then hand do the pigmented mix. More testing to come.
Posted by Gotthammer at Tuesday, April 05, 2011