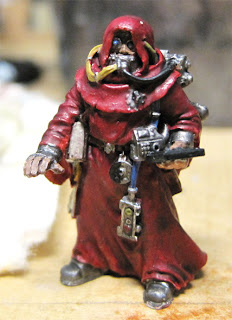 This is Rem Luchs, Enginseer of Igneus Angelus. It's only taken me around a year or so finish him, despite how basic he is. Don't know why, but I just never found the inspiration for him. But, I've worked out his character / personality (calm zen-like wisdom, a contrast to d'Orleans' more rasha dn brash nature). 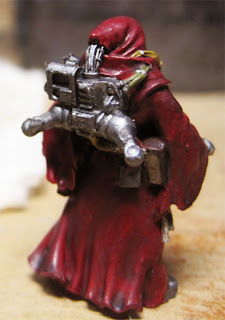 His colours are very simple - Red Gore over Mechrite Red, washed in black. Metal is Boltgun Metal highlighted with Mithril Silver. Flesh is Tallarn Flesh, and the various cables were done in foundation colours. 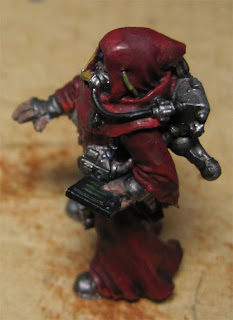 This is how he'll generally be seen, when 'installed' in the Reaver's engine room.

In addition to Luchs, I've been painting up some Sentinels to act as skirmishers for my Titans. 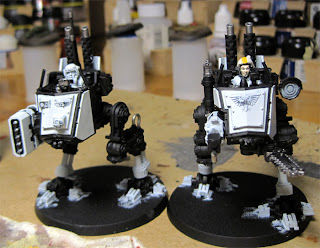 They were based in black, with the white built up with Astronomicon Grey, then an Astro Grey and White mix. It gives a very stark, cold, white - which is just what I need for the Pale Riders. The photos aren't the best, but it looks really good in person (even if I do say so myself), bold and very distinctive at a distance. It also matches the colours of my Titans very well. 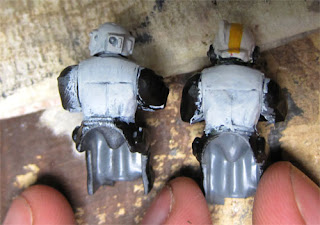 The flamer pilot is female, her head made from Eoywn's and a 1st ed Guard helmet. It was formerly attached to a body I was using as a controller for my Legio Cybernetica minions, but I decided to reuse it here. In addition I thinned down the pilot's waist and arms to match the new noggin's slighter frame. 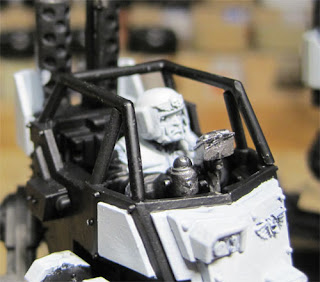 To show off the pilots better I cut the front struts off of the roll cage. It is less protective, sure, but looks better and makes the 'face' seem less cluttered to my eye.

Hopefully have these guys finished in a couple of days.
Posted by Gotthammer at Wednesday, June 09, 2010