All Elysian units have 'Iron Discipline' - they can always regroup if 6" of an Officer - and Deep Strike (save the Tauros'). All the infantry units may take a Valkyrie as a dedicated transport (the only option).
Points are different, but I'm not getting into that.

Company Command Squad - Basically identical to the codex version, save the Veterans in the squad can be issued with Auxillary Grenade Launchers, and the Commander can get a Homing Beacon. Pretty sweet bits of wargear, huh?

Pitty they forgot to put rules in the book for them (or if they are they're nowhere near the army lists).

The intro section says this is an update for the IA3 list, so maybe they're implying you need that as well as the regular codex? But they have the special rules for the Lascutter and a few other bits of equipment in this one, so who knows.
Oh well - in the last codex the AGL is a one shot krak grenade launcher. I guess the Homing Beacon is like a marine one - no deep strike scatter within 6" or the like.

Lord Commisar - same as the Codex but he can deep strike and get a magic Homing Beacon.

Long Range Ground Scanner - A thematic choice that can either disrupt infiltrators or aid other units in their shooting.

Storm Troopers - same as the Codex, save getting aValk as a transport. Don't have Iron Discipline, so a weaker willed than the Elysians...

Drop Sentinels - Scout Sentinels, but they can only get Heavy Bolters, Multi-meltas or Heavy Flamers.
They can take Sky Talons as transports.

Veterans - As the Codex, with each vet able to take an AGL. They can take heavy weapons teams and have the same three doctrines available to them. Good for making Harakoni Warhawks.


Dedicated Transports Valkyrie - As per the Codex, but with a note about being a flyer with hover in Apoc.


Fast Attack Vendetta Squadron - As per the Codex, but with a note about being a flyer with hover in Apoc.

Tauros Squadron - The smaller buggy. They come in squadrons of 1-3 with a Heavy Flamer as standard. This can be upgraded to a Heavy 2 grenade launcher. Also have the ability to ignore immobilised results on a 4+ and re-roll difficult terrain.
Can take a Valkyrie Squadron as a transport option - each vehicle takes an individual Valkyrie, and they must remain in coherency while transpoting the Tauros squadron. The implication here is that after they drop the squadron off the Valkyries don't need to maintain coherency (more on this in the Sky Talon entry).

Tauros Venator - The bigger vehicle with a turret (twin-linked multilaser as standard). Can upgrade lasers to lascannons, and has the same immobilisation save as the smaller buggy. Transport option is the Sky Talon.

Vulture Gunship - A valkyrie without the transport to make up for lots of guns and options.

Elysian Sentry Guns - Using the older Tarantula rules, they are automated twin linked heavy bolters or lascannons that have a few targeting restriction options (90 degree arc with long range or 360 with shorter)

Valkyrie Sky Talon - the heavy lift Valkyrie, purchased individually, though they do not use up a slot (but otherwise count as a heavy support choice).
It has the special rule 'Sky Lift': A Sky Talon may transport one Tauros, one Tauros Venator or two Drop Sentinels. The Sky Talons must maintain coherency while transporting a vehicle squadron.
Interesting in that the Tauros mentions taking a 'Valkyrie Squadron' as a transport (indeed the early pictures make a point of it fitting inside one), but no such entry exists. I think the idea was that they could take either, but for whatever reason the regular Valkyrie entry missed a version of the Sky Lift rule clarifying the coherency issue I mentioned above. 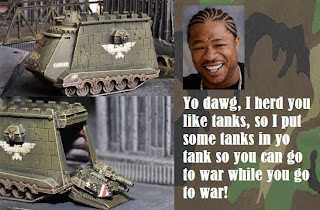 Imperial Navy - Thunderbolt or Lightning - These are the same as their Apocalypse counterparts, being only flyers, but there is no mention of them being Apocalypse only (unlike the Valkyries). This creates an interesting conundrum in that should a game allow the IA8 book as a valid choice it would therefore allow a 'flyer' unit into an otherwise normal game of 40k (including them being nigh impossible to shoot down). However the Valkyries would still be normal skimmers, not flyers.
They also have wargear listed with no rules printed (Long barrel Autocannon, Skystrike missiles).


Summary - The list is good, and really makes a perfect airborne force and even has a few different builds available in it.

But, needing to own another two books to use all the options in it is pretty naff. The leaving out of the AGL and Homing Beacon rules is pretty abysmal too (unless I'm just missing them, but I've looked and looked).