I played a full game of the Horus Heresy boardgame today, and like my initial impression I am still very impressed.

The game didn't take overly long, about 4 hours, considering it was the first time my opponent (Vash) and I had played fully. We only made a couple of errors (that we noticed) and those mostly related to mixing up the wording of how actions or orders were performed.
We only had to go to the rulebook a couple of times, and then for fairly obscure rules - the 40k equivelant of looking up firing a template weapon at an occupied building. 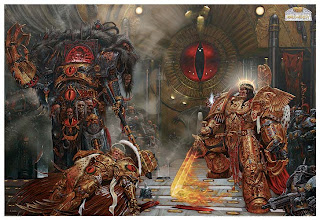 See, the Primarchs were all super quick growing, but obviously not maturing - the Emperor knew this and figured this whole 'heresy' thing was just Horus' angsty teen rebellion phase. I can see him sitting on his throne, telling Malcador they'll grow out of it - finally he gets sick of it all and does the whole 'don't make me come up there!' thing.
So I didn't take any photos, but here's a pic of the board from BGG I 'borrowed': 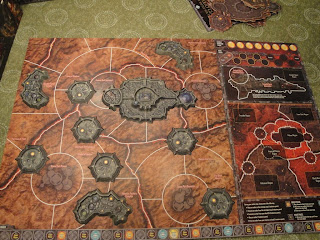 For reference the four spaceports are the circular areas marked with white outlines, the palace in the middle, the kidney shaped bits are factories and the grey circles are fortresses. Also in lieu of pics I've supplied some art to break up the text (much of it by David Hudnut). 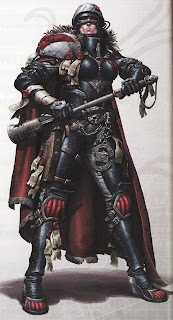 Arbites defend the palace from all manner of threats, so long as they're no tougher than a puny cultist rabble.
The game is very fun, very tense and long term plans pay off - however long term plans also get scuppered when your foe moves you initiative marker forward four spaces in one combat (grrrr).
This game went as a loss for the Imperials due to Spaceport Victory by the Traitors with a well executed drop pod on the eastern fields. This is partly my fault as I hesitated too long to dislodge the Traitors (including Angron and Mortarion) in the western spaceports. I had done this in the first game and didn't want to be too predictable, but took too long and allowed the Traitors to build up. 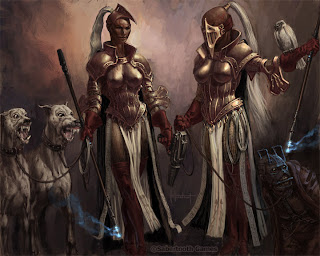 Why aren't we in the game? Just pretend you're Custodes, ok.
After the loss we kept playing as had I held just one spaceport I was about to launch two boarding actions against Horus - we played it out and I stomped Horus dead in one turn without loosing anyone (ok, a Custodes and Blood Angel unit, but nobody important). 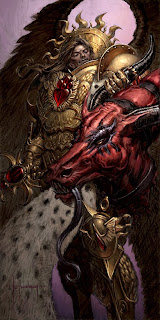 Like me!
The tricky part of a manoeuvre like that is it takes some space on the initiative track to get some breathing room, but Vash wouldn't give me any as he knew I'd make him pay for it (quite rightly). What I should have done is before my planned attack is to assault Angron's troops, who had been bloodily rebuffed by the White Scars dug in to their west, and force the issue down at the south western landing field.
In all honest I prettymuch wavered in the face of which western field to take on - partly because I forgot I could draw cards from my recyle pile not just the new stack! I foolishly forgot that I could play an Assault order, then pull it back as it isn't discarded and I don't need to wait for the orders phase to retrieve it.
D'oh! 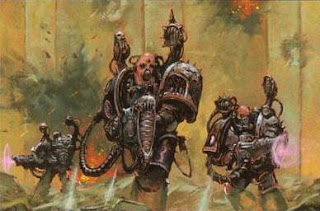 Why hello, we're gigantic jerks!
I only narrowly lost the North Eastern field, as I had a largish contingent of army and armoured troops there, but unfortunately they were assaulted by the Emperor's Children + Fulgrim, and Vash got a lucky combat card that tunred one of my guys over to him.
But that is the nature of the game, and it was very well played by my opponent, so don't take all my maybes as a discredit to his skill. 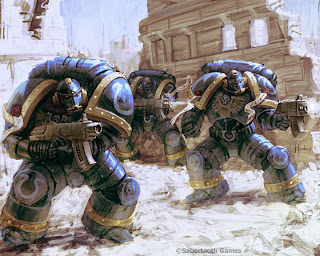 For Ultramar and Rowboat Girlyma- wait, we're not here yet...
The only criticisms I have (perhaps a bit of 'you failed me' here) is that I think the Spaceport Victory is too early in the game - halfway infact. It does make it an easier tactic to attempt for either side than going for the big kill, and doesn't feel very heroic to me...
The other is that in some ways there needs to be more units on the board. By that I mean there are some great cards for the Arbites or Adeptus Mechanicus, but you only have three of each and they start isolated.
Getting the AdMech to a battle, in the first scenario at least, is pretty much impossible most of the time.

But, the other five scenarios all have more flexible setups so we'll be trying the second, 'HeresyUnheralded', next time we play.