As I mentioned previously I played a game of Fantasy Flight's Horus Heresy boardgame today, and I have to say I'm mighty impressed.

The gameplay reminds me of Nintendo's Advance Wars series of games in its diceless state and somewhat slow gameplay at times. Also the way every unit can be fairly evenly weighed up against another makes them similar in my mind.
Bell of Lost Souls described it as 'stately', and I think that's a fair description of the play. It really does require planning well in advance and keeping an eye on the initiative track for taking the different phases and such into account. 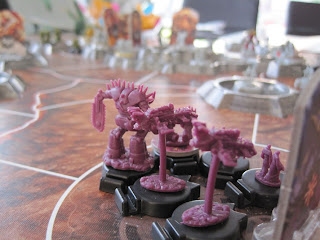 Fulgrim and his troops land at the uncontested Space Port Damoclese.
The system is fairly easy to learn, but not quick, as everything is so intertwined that you need to know everything and how it all interacts before starting. My mate Vash and I were both playing for the first time today (I had read the rulebook through thoroughly though) and it took quite some time to set up as I hadn't plugged anyone into bases or the like.
The rulebook is very thorough, often going over something a couple of times to explain it thoroughly. While this is very good when reading the rules it can be a bit much trying to look something up quickly.
Fortunately Board Game Geek has come to the rescue and the members there have made some nice summary sheets.

However, once we got into the swing of things we covered quite a bit of ground before we had to finish early.

Some of the downsides of the game are that the plastic forts are quite crowded at times. I've kept the cardboard punch-outs as they will no-doubt come in handy for messier combats.
Another minor problem was that I recieved an extra Arbites mini but was shorted a Custodes. Not a huge issue as I can simply paint them up as the right unit (or convert some Sisters of Silence maybe), but it provided a bit of confusion. 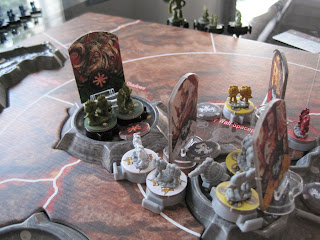 Kahn, Sanguinius and a bunch of Marines destroy the Nurgle forces at the Eternity Wall Spaceport, wounding Mortarion badly in the process.
The combat, as I mentioned is completely diceless and provides a bit of cat and mouse tactical tension compared to the otherwise strategic gameplay. Each card has a special effect dependant on the (ie Space Marines must be present), their status (attacking or defending) or affiliation (Nurgle, Khorne etc).
Also the number of cards used goes up as each hand is played giving the choice to either save cards to dish out more damage later or save units by discarding the cards to block incoming hits.

For example in the combat above I used a Space Marine ability to remove the Nurgle Marines, which then negated Mortarion's (quite powerful) special ability as he needed them there for it to work. Vash had the option of using two-three cards in his hand of five to negate that, but had already planned a combo attack of summoning Daemons to his cultists then using a special card with them to rout my guys.
That late in the game I wouldn't be able to counter it, and my assault would be thrown into disarray.
Fortunately for me I was hitting him hard and had a luck draw, wiping out the remainder of his forces and wounding Mortation four times in one go!

So yeah, a good sytem in place there. The only downside is the cards need a really good shuffle. I mean really good. We'd both shuffled the decks multiple times and cut them and all sorts, but it was still common for us to be drawing pairs of the same card over and over. A downside of the hard wearing construction of the cards, I suspect, but nothing critical. I think I'll be playing a controlled game of 52 pickup with the decks before the next game.

It is a very non-40k player friendly game, and no real knowledge is required, though it will help to be at least passingly familiar with the units. Someone who's played Dawn of War would do just fine. My friend Matt seemed intrigued by it, but it being only a two player game is a bit of a pain for the more social gamers among us.

Overall I'd rate the game 8/10 - the lost points are due to the tight confines of some of the regions, and the minor problems I've already mentioned.
Posted by Gotthammer at Monday, May 17, 2010