Kickstarters: Good or Bad for the Hobby?

So, with Reaper’s Bones Kickstarter winding down with just over three million dollars pledged, there is certainly a great buzz about crowdsourcing for wargames. We’ve had a spate of companies large and small hopping on to produce new lines and there have been some fantastic (and not so fantastic) offerings. 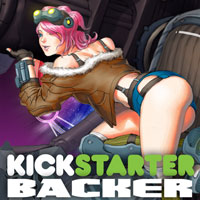 But is it good for the hobby?


The reason I’m asking this question is a comment from EldarGal on the BoLS lounge in regards to Dreadball by Mantic:


“17 miniatures for 80 is frankly absurd right when Reaper are offering 200+ for one hundred and Dark Vengeance will be coming out with 60 odd for a similar price. 33 or so for 150 isn't any better. The sculpts aren't that nice either. Even taking into account that this is a board game, Sedition Wars provided 51 lovely miniatures for 100.”


“I think you're being a little harsh here. Those other Kickstarters only reached that number of minis after they'd started and gotten a crapton of cash to enable the mass production - they initial mini to dollar ration was much lower. GW also already has the capital and business model to mass produce and potentially loss-lead on Dark Vengeance.”


Lady EG responded that Sedition Wars came with more miniatures initially (50) and many others have also. I work in retail, so this reminded me of a common thing I call Gotthammer’s retail 101:


People are greedy cheapskates who won’t want to pay a cent more than they have to and expect perfection in response.

If you’ve ever worked in retail you’ll no doubt agree. The reason I ask if crowdsourcing in the Kickstarter vein is a bad thing is that people might get used to getting high quality miniatures for 40 cents a piece. There are of course other factors in why some Kickstarters are better value than others:

Reaper are already an international company, and their offerings are recasts using and already existing medium. They’re simply making moulds and producing these guys. With a locked in number of pre-orders it will be simply a matter of cutting moulds, ordering more plastic (bulk discount!) and shipping. It will be a lot of work, but the framework is already there.

Wreck-Age is a new startup. They don’t have the connections an existing company like Mantic or even Studio McVey have to get stuff made. Even comparing Sedition Wars to Dreadball, perhaps the McVeys know people in the games industry who can get them a good deal on the board pieces to save costs (this is pure speculation, but it’s Aly and Mike McVey – I’d do them a solid).

In one of the Order of the Stick Kickstarter ($1.125 million raised) posts creator Rich Burlew commented that pledge bonus items were delayed due to the initially contacted printer taking too long, and needing to find a new one. Long term business customers can often get better deals or, like Games Workshop, save even more money by doing everything in house. 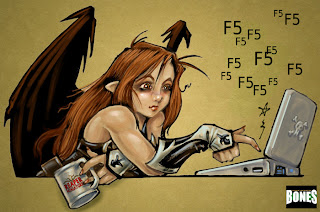 - Stars in their eyes

Aka thinking that Kickstarter is an unlimited trough of money to draw from. Reaper got three mill, surely people will have money to spare for me, right? In what I consider a disturbing, or perhaps just ill thought out, move a group has recently put up a bid for money to make an admittedly awesome sounding series of dioramas.

Now the highest levels do net you either a piece of the diorama itself ($650, limited to 15), or a painted mini/vehicle ($70/$160) so you’re either getting overcharged for their commission service or this is essentially a fancy advert for their painting service. The lower levels get a making of video and tutorials. Again, this gives me an uneasy feeling as many companies may be eying these funding options as a quick way to make cash. Or, as a commenter of HoP put it:


"So, they're making dioramas and asking money for it? Hmm. Are the dioramas being auctioned for charity or anything? It seems to be just one massive hobby project they want money for. That's fine but it feels like crowd funding has gotten a little out of control."


“Well, mighty Gotthammer,” I hear you ask, “that’s what they’re for aren’t they?”
Yes, yes they are loyal minion but I ask you this: what if Games Workshop decided it was going to release the next army book / codex through a Kickstarter campaign? Raise five million or Tau won’t get re-done. You no doubt scoffed at that – GW is a global company with a huge line, its own production facilities, distribution and so on.

Well… so’s Reaper. What's to stop GW from doing it that way?

Food for thought, certainly. I don’t much like the idea of a pre-existing, well established company relying on crowdsourcing for its basic operations (I consider Bones an expansion out of Reaper’s normal territory), but there may well be some thinking that that’s the way to go. There is only so much hobby money floating around and, going back to the original quote, people are looking for value for money. It's an awful big risk to put your company's future and your customer's goodwill when there are other more traditional, albeit less flashy, routes to go. 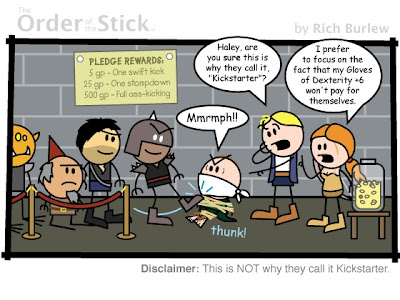 The company I work for is engaged in a seemingly never ending price war with its nearest competitor, driving prices of many items ‘down down’ (for you Australian readers). Problem comes when the prices go back up to normal, or are forced up by uncontrollable events.
As an example we recently had flooding and various other weather phenomena that have played havoc with local produce. For a brief while some items were ridiculously cheap – both through oversupply and artificial reasons. When this becomes untenable the price goes up, often tripling or more. To say some people are not happy is an understatement.

See, people like good things for cheap – I know I do. And they get used to getting things for cheap. Think the stereotypical ‘back in my day X only cost Y’ old guy rant and you’ll be on the right track. So sales of that item slow as it isn’t ‘good value’ anymore or is ‘too expensive’.


Now, imagine if you will all those minis you just got from your $100 pledge to Reaper (I don’t mean to keep using them, but they’re really good for illustrative purposes). Now imagine paying full price – even at the bones price they average around $1.80 or so – and you’ll be paying around $400 or so. Would you buy spend that much for those minis normally? I imagine Reaper is really hoping so as they’re going to be investing a lot of money in this line.

If it becomes ‘normal’ to get such good value for money with minis it does paint a rather dark future for small indie producers. Perhaps I’m being a bit melodramatic there, but in the world where minis cost $5 each (and some are as large as a Relic Knight) will people decide that a company like Hasslefree (or even Reaper themselves) isn’t ‘good value’ anymore?

I think the key is to always compare to 'normal' miniatures when looking at value for money, not other Kickstarters. Seeing the great discounts Reaper can offer with all that cash will make anyone look like rubbish next to them. 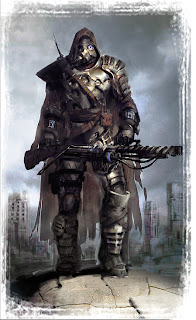 I do think Kickstarters and other crowdsourcing do have great potential – obviously given my shilling of some here over the days – but I do think people looking at diving in should weight up their options and not just assume they’ll have an instant winner. They’re all going strongly at the moment, but they’re also new and shiny and exciting. I’ve already seen talk of ‘pledge fatigue’ setting in, and then when this recent spate starts rolling in people are going to have mountains of minis to paint so might be put off even great deals when they come along.

But that doesn’t mean you shouldn’t check out Wreck-Age.
Posted by Gotthammer at Sunday, August 26, 2012