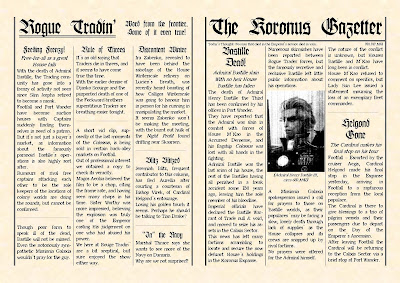 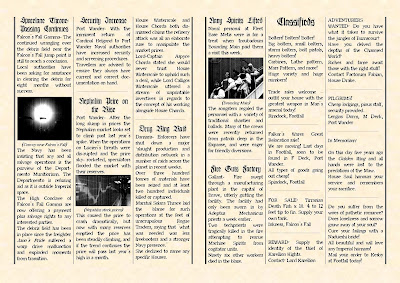 As you can see they've been a busy bunch, making big names for themselves, which brings up an interesting thought - what sort of destinies are they cooking up?

This is something I've touched on previously, but it's an interesting challenge for a GM in both running and world-building. With an open 'sandbox' world players can go and do whatever they want, but need a suitably 'free' background. For game with an overarching plot players are tied to the rails to a certain degree (not always a bad thing BTW).

Blending the two can be a tricky proposition when trying to mesh a destiny with player's desire to be free and take control.

Rogue Trader provides a perfect avenue to have the two exist simultaneously in blocking off star systems but giving players a bunch of 'free' hooks to explore on them own. Of course in a more terrestrial game this is much more of an issue, but does not avoid the issue of keeping the plot straight.
In my game I'm using the Warpstorm Trilogy as the basis for overarching plotline of the game, so the plan is to tie one of the character's backstory to the main plot. Should that player go and do something stupid like get themselves killed I do have a contingency plan in place - there is the chance that a player could otherwise 'wreck' the plot.

Obvioulsy it's not that a player should ever be said to wreck a game (at least not unintentionally) so it is of course entirely possible that they somehow finangle a way to make the plot come to an early grave.


If this due to an epic TPK, then oh well... I can recycle the plots later ;)

Should they cut a big section out of the plot then also oh well... dealing with those sort of things is the fun of GMing and good on them for clever thinking.


Having a destiny for a character, or characters, needs always to be in mind for a GM - I'm no fan of PCs knowing they're destined or the chosen ones (past examples may have soured me, see earlier link), so though the player knows they have some secret in their past that will be revealed - it was their idea in the first place - but I've only given vague hints thus far.
When players start making their own destinies it can be most entertaining, because they aren't always good. The Drakes have made a number of powerful friends, but have racked up quite a number of enemies. Enemies who are prepared to wait...

In some cases I'll speak out of game to the players in both vague and direct terms about the consequences of their choices, but mostly I prefer to leave things nice a vague. The PCs actions in the world will affect how NPCs act and their plans (and so they should), and they will sometimes change their plans to thwart or aid the PCs.

It does mean a fair amount of record keeping, but I find that having the main plot driver seperate from both what the PC and NPC's actions means that should they throw a spanner in the works through some side quest things are more recoverable by not being tied too tightly.


Listening to player speculation on the plot is also important for gauging how interested they are in plot points. For instance my players were very interested and somewhat unnerved by recovering information about the Gaunt Triumph, so hopefully they'll be enticed by what's in store.

If they're not, I'm sure I'll think of something.


Edit: Apparently this is my 200th post. Go me, and thanks to all my loyal minions!
Posted by Gotthammer at Tuesday, June 05, 2012