So I'm putting my money where my mouth is here. But first, a preface.

Most races in 40k have been redesigned and refined over time. Eldar have changed the least of some, Tyranids the most. But the changes are there. Compare a 2nd ed Guardian to a modern plastic one: 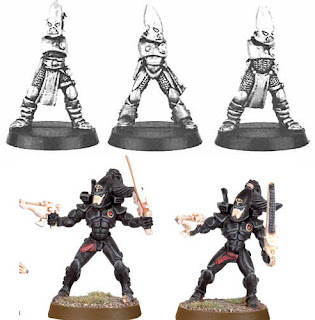 The legs are more defined, the armour layered and so on, but still recognisable – just sleeker. Compare the old Falcon to the new: 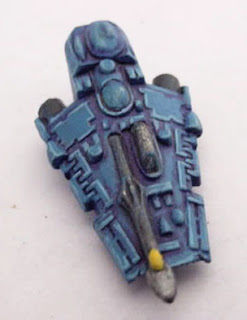 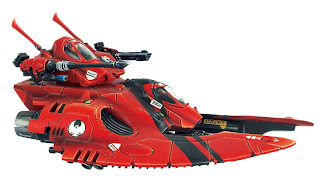 Much bigger difference here. But they took a design I thought was cool back in the very early 90’s, and made it into a sleek, futuristic looking vehicle. Gone were the blocky shapes like a Lamborghini Countach, and in were the graceful curves of the vehicle’s namesake.
But Space Marines... they haven’t changed a bit since they first started.
Ok, that’s an exaggeration, but aside from a slight difference in scale and sculpting style a 2nd ed metal body Marine is the same as the Tac Squad box marine. With the fantasy tropes imported into the futuristic setting of 40k, Marines were given the role of Knights or Samurai: heavy armour, heroic, monastic, bold colours and so on.

It is easy to imagine a knight in armour or a samurai duelling to the death, leaping around and being generally action packed. Kinda like this: 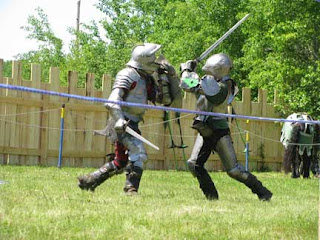 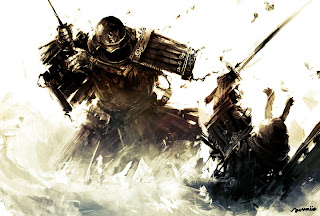 Image from here
But it’s hard to see a guy this bulk and with these proportions doing something that dynamic: 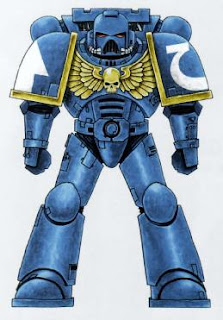 There’s a reason most marine pictures are limited to ‘standing and shooting’, ‘standing and shouting (maybe while pointing)’ and ‘running while shooting and shouting’. generally physically impossible for a marine to get into a large amount of poses with the way they are.
I’m going to present a radical re-design, going quite a bit farther than I think is really necessary to illustrate my point. 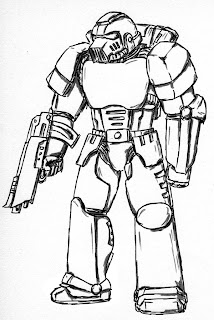 So there it is, not the most wonderful design, but then again I’m not getting paid to do this... Starting from the overall view then working down from the top I’ll go over what I’ve done and why.


The Figure
Firstly, I changed the proportions rather drastically. Marines in the fiction are described as supersoldiers constantly on the attack, charging their foes and killing them either with dakka or their superior close combat skills. If you’ve ever read a Marine book from the Black Library you’ve likely read a description of them moving with blinding speed, parrying, jumping away from attacks/explosions and generally moving with great speed.

The GW Ultramarine design above doesn’t look like the kind of guy to fly through a window ahead of an explosion, land on his feet, draw a chainsword, block a guard, back kick another off a ledge, before ducking another swing and killing the first guy.
Does mine? I think it does more so, and since this is my blog I’m running with it so there.
But back to proportions. The GW UM is boxy overall, big flared boots balance out the massive shoulder pads. He is big, intimidating and I can easily picture him advancing relentlessly and unharmed through a barrage of gunfire and explosions.
However, that’s what Terminators are for, and the silhouette of the GW UM is not much removed from his bigger brother anymore. The shoulders are bigger, as is the backpack. The legs are more flared and blocky.

So what did I do? Firstly I narrowed him down, thinned the legs and waist, while keeping broad shoulders. The backpack was similarly reduced. His stance is more upright, with the feet closer together.

Accentuating the triangularity of the torso and giving the illusion of elevating the head (by having the helmet go above the backpack and shoulders) instantly makes him look more athletic. It’s a basic trick of figure design dating back to the ancient Greeks.
Many of the ‘best’ and ‘perfect’ examples of figure sculpture are anatomically impossible – they’d be all out of proportion to a real person (super shoulders and slightly small heads), have no tailbones to make their butts look better - extra muscles even. It’s because, much like in film, reality doesn’t look real – or people prefer to look at idealised reality depending on who you ask.

But this isn’t an art lesson, so onwards we go.


The Helmet
Possibly one of the most icon bits of Marine hardware, I fused elements of the Mks 4, 6 and 7 helmets together. The longer snout is Mk6, but is more squared off like a Mk4. It has the Mk7 grill, though cut at a slight angle to give the helm a sense of movement. Like it’s a wolf head lunging or some such.

The optics I made into a monovisor, because I like that and think it looks better. Yes, some of this is just personal preference.
Lastly I made it bigger, so Marines aren’t pinheads anymore. 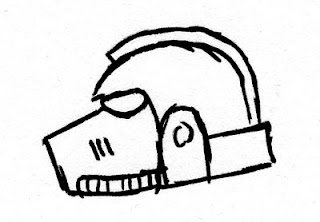 The Shoulder Guards
Possibly one of the biggest changes I made. They’re now squarish with rounded edges, and made of two layered pieces. The idea is that the lower slides under the upper when the Marine raises his arm, so he doesn’t hit himself in the side of the head when he does the chicken dance.
They’re also a lot smaller, or at least end sooner down the upper arm.


The Arms
The forearm guard is based on the Mk4 piece, but with a raised stripe. I’m not sure what it’s for, but it adds a bit of visual interest over the sewerage pipe piece they’ve currently got. They could get a computer panel and keypad built into one arm on the inside of the wrist.


The Torso
The concept is fairly lengthy to describe, so bear with me.
The key here is layers (like a troll). The bottom layer is much like a Mk5 torso – the criss-cross cables going over each shoulder and under the armpits, with a fifth to the belt.
Over this goes the main breastplate (would have an eagle device, but left it off for clarity), much like Mk3 armour. The plate only covers the front and side of the ribs, rather than extending the whole way around.
The stomach has a similar piece, covering the abdominals and with the Mk8 style cable cover int the middle of it.
This accentuates it being tough armour, as it is additional to the ‘undersuit’, so to speak. It also gives more visual interest, with additional points of highlighting/shading and so on.


The Waist
I gave him Terminator style hip guards as a visual cheat. It lets the thigh armour start lower so the legs can bend into more positions without worrying about ‘clipping’.


The Legs
More layering. The Thighs have a raised section that goes most of the way around. The shins have a more moulded ‘inner’ piece, with the shape of the calf visible, with extra plating on the front. Around the ankles there are movable guards to, like the hips, allow for full flexibility without clipping.


The Backpack
Cut down, compact and more flowing curves to fit with the rest of the overall design. 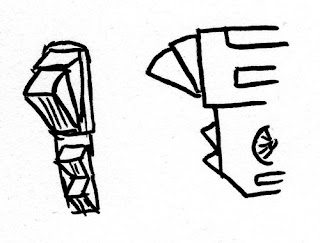 The Bolter
Aside from being a bullpup (Azrael has one!) the main case is cut at a 45 degree angle at the front to make it look, for want of a better term, faster.

Would I, if given the opportunity by GW, make this Marine into the new look of Space Marines? No. I would, however, make one rather large change: pose and proportion (it’s two things, but one change – trust me).

I’ve recently been building the Forge World marines, and something struck me as odd about them. Aside from their obviously different armour something seemed odd about them. I then realised that they are skinnier than their plastic counterparts, and generally stand more upright (especially the Mks 4 and 6). No dramatically lunging or standing in Horse Riding stance for them. They also have narrower shoulders due to thinner shoulder pads.
Basically they do to a degree what I did in my first step – redesign the proportions. I’d go slightly further and tweak the dimensions here and there (taller thinner overall), add some more details and layering to the armour, but generally I’d keep them pretty similar.

I honestly think that’s all they need to be snazzed up – they can’t be changed too much, they are the iconic guys after all.
Which allows me to segue nicely into Part 3 about selling the game, keeping people interested, and why it’s important who cleans Eldrad’s toilet.
Posted by Gotthammer at Wednesday, September 29, 2010