Cries ring out, loud and harsh
From cracked and broken horns
Long forgotten battle cries
In strange and foreign tongues


Yes, legions of undead have invaded my workbench. Fear not, I'm still going to be working on 40k stuff and the hulk campaign (I finished a fair bit of stuff last night on it), but I need to get my fantasy fix too. 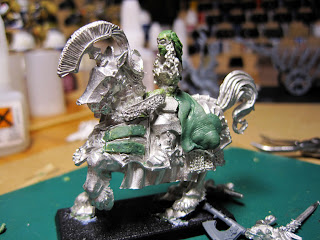 Here is Lady Bellona Malavechii, second scion of the House Malavechii (minus her left arm)

The horse and legs are from Marius Leitdorf, torso and head is the Aristocratic Vampire, and arms are from Repanse De Lyonesse. 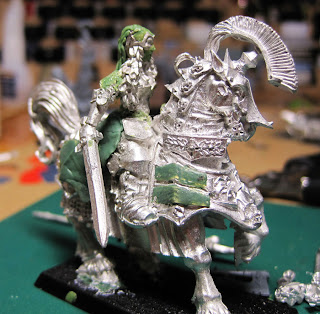 Firstly I shaved off the Empire markings and names before smoothing them over with greenstuff. The vampire was sawn in half and pinned to the legs. I then sculpted the face with her mouth closed and enlarged her nose. It's an ok sculpt, but a bit to Bram Stoker's Dracula: the movie for my tastes. 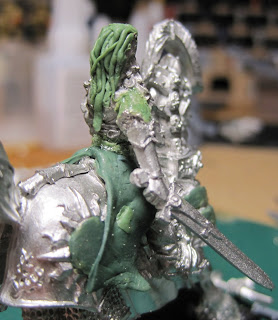 Her left arm will be Repanse's lance, but not upper arm as she was holding it with her arm fully flexed and I need a more open pose. The arm above will recieve an elongated robe thing coming further down, but the filler needs to cure before I do any more work.

Overall very happy with how she's turning out - it was my first time using colour shapers (also known as paint shapers) to help with the sculpting and they worked like a charm. 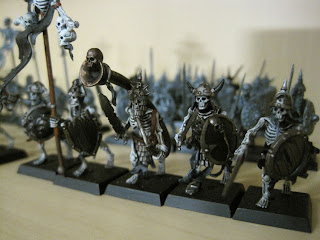 Skellingtons painted up. Very simple to do:

Livery for banners will either be plain black for unit standards, but the Battle Standard (carried by the Dread Lord Hjalmarr) and any magical banners will be done in black/yellow. 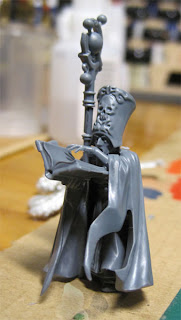 The Evil Pope reads from his Anti-Bible (backwards no doubt). Necromancer made from the Battle Mage kit - he'll be mounted on a Corpse Cart. The Cart will be sans-corpses and zombies as they're ugly. He'll have a host of books on there instead and it will be pulled by more skeletons.

Necromancer on foot. I simply grafted on a spare skull in place of his face. 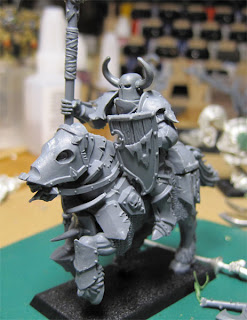 Black Knight stand in. All the spikes and arrows were cut off and he was assembled with a normal Chaos Warrior's head instead of the super-chaosy knight one. He's also got a Grave Guard shield.
The plan is to paint the horse etheral - white base with a green or blue wash. I'm going to do some test models first to see which colour looks best.
Posted by Gotthammer at Tuesday, February 16, 2010