Finally finished another pair of Terminators, so now I only have three left from the Space Hulk box. 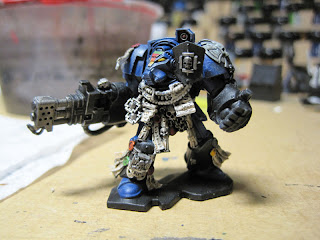 Trooper Veteran Vinko "Vulture" Bodan. Her armour is partly black due to being a member of the Field Police. 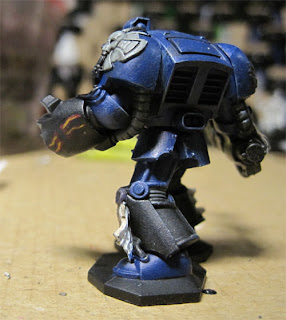 Here you can see the Field Police badge on the back of the power fist. Field Police come under the control of the Chaplainry, and Chaplains are drawn from their ranks. They enforce discipline off duty, and in the field function as shock troops to secure landing zones and co-ordinate transports. 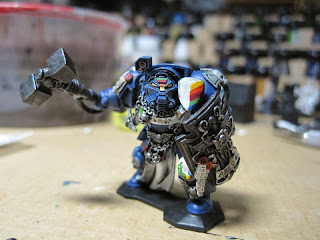 Trooper Veteran Thu "T.V." Vukasan. Converted from the thunder hammer Sergeant from the box, with a helmet from the normal terminator kit. I also moved his arm into a more action-packed striking pose. The script on his chest (ferox) means 'defiant'. 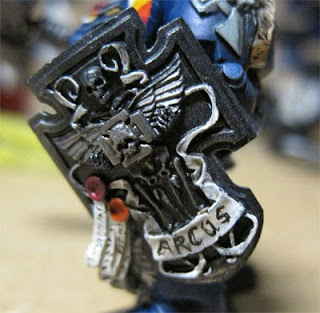 Detail of his shield. Arcus is latin for rainbow. The Crux is covering where a large blood drop used to be.

The whole gang all painted up, with a few extras. 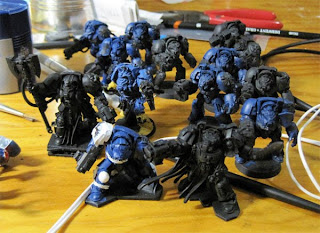 Still waiting to be painted. You can see here that I have added helmets to the two Librarians and the power sword Sergeant (who is going to be a Captain). 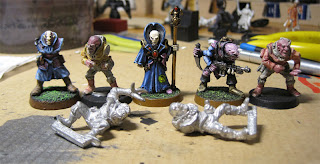 I also recieved my Genestealer hybrids the other day, and they need painting up. It will be a bit of a shame as the Magus and the hybrid on his left are very nicely done. But the colour scheme doesn't match my genestealers, and their bases are not very inside a spaceship-y. The hybrids of course need arms... 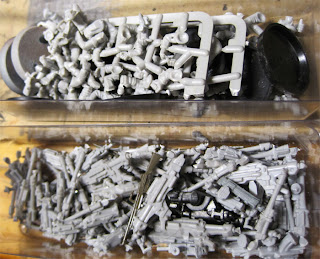 Fortunately my brother used to collect guard, so we have huge quantaties of RT era guard arm sprues and weapons. Not pictured is the tons of 2nd ed pistol sprue and close combat sprue weapons. The Brood Brothers were normally shown with the Ork/Chaos weapons, but I don't have those and there work just as well. Pictures to come!
Posted by Gotthammer at Thursday, January 21, 2010