During this holiday period I managed to get some time to make a whole bunch of woodland terrain I've been planning to make for ages.

There are ten marines in this picture, can you find them all?
The main catalyst for getting it done was The CNC Workshop releasing their terrain basing series. These are pre-cut (though on a sprue of sorts) MDF templates of various sizes for mounting terrain on. Saves using the jigsaw for such small pieces.

The trees and basing material are all from SiSt model trees, the tree stumps from Zuzzy, and the runestones by Fenris, purchased through Hasslefree. 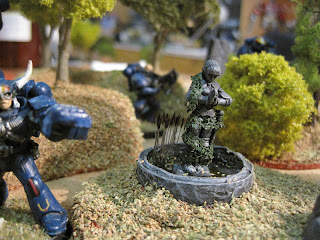 Speaking of Hasslefree, I used thier Tiriel as a statue, standing in the base of Gen's Altar, wrapped in etched brass ivy, and backed by brass reeds. She's standing on a small plinth, and the water is just the heat and melt stuff for model railways. 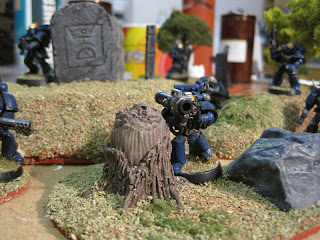 Closeup of a Zuzzy tree stump - it was simply painted Khemri Brown, washed with Devlan Mud, and the non-bark areas drybrushed with Khemri again.
The rock is styrofoam covered in plaster, painted Charadon Granite, drybrushed Adeptus Battlegrey, then again with Fortress Grey and washed black (same for all the stones save the fountain, which I did a light white drybrush to make it stand out more). 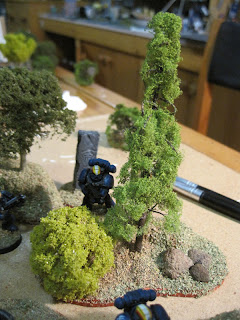 Some of the SiSt trees, with rocks picked up from the bush behind the house. 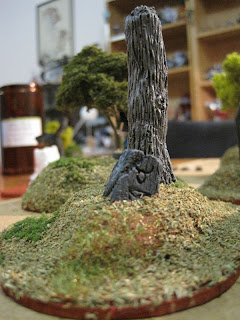 Zuzzy tree with Fenris marker. I sunk the marker into the foam to make it appear more ancient. This tree was painted Astronomicon Grey, washed with Devlan Mud, then drybrushed with Dheneb stone on the exposed areas. 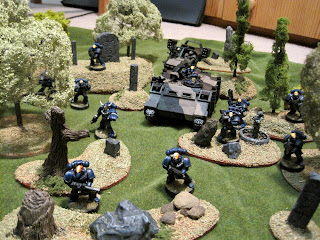 Rainbow Warriors on patrol (with some of my larger SiSt trees)! I've designed the terrain so that it gives a fair amount of LoS blockage and made sure that there is enough room for minis to stand on the hills and between the stumps and rocks.
It's also kept not too 40kish so I can use it for LoTR and go with my Argonath and Amon Sul pieces.
Posted by Gotthammer at Wednesday, December 30, 2009