Finished basing up most of my SiSt trees: 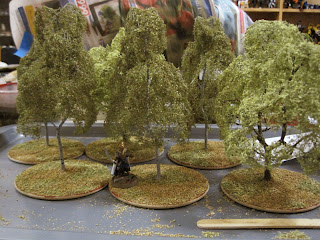 The basing is green and brown sawdust scatter, giving it a nice crunchy texture. I built up some undulations on the bases with spakfilla so they weren't totally flat, painted them brown and glued on the scatter using watered down PVA.

The PVA was watered down so it was easier to paint on and wouldn't be streaky, as that can cause the flock to dry in the pattern of the brush strokes. 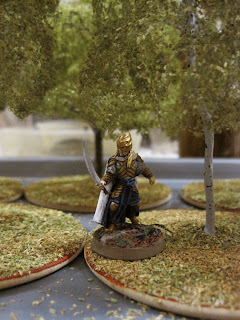 Glorfindel still has clearance under most of the trees, though a few will cause him to be under the canopy (like the weeping willows).

Next up in this project is to either make a bunch of hills, paint up my Zuzzy tree stumps, or finish up my wrecked Rhino. I'm also looking forward to the arival of my Argonath kit from Monolith to add to the board.
Posted by Gotthammer at Wednesday, September 16, 2009