Been working on my Space Hulk dudes the last couple of days, namely de-Blood Angelifying them. Most of them it is a simple matter of carefully chopping all the symbols off (the guy with the laser-guided powerfist was very simple, as was the dude in the dress).

Some of the fancier ones I've done are the Lightning Claw and Thunder Hammer troopers: 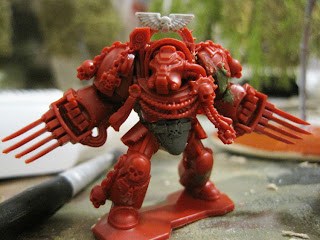 I've used the torso from the Chainfist trooper, as I'm not overly enamoured of his pose, or the LC guys torso. The crossed chains are alright, except the broken one is just gone, not hanging loose or anything. However it did have his belt and codpiece attached.

I got a spare pair of regular terminator legs, cut the legs off at the hips. To get the piece off I used a razor saw, then fit it with some greenstuff and a fair bit of trimming. The replacement hat thingy is from a 2nd ed banner pole. Crux Terminatus pendants replaced the blood drops on the back of his claws.

I've also greenstuffed the armour damage back to normal. He still has a few touchups to go, like his right shin and the greenstuff, but he's mostly done. 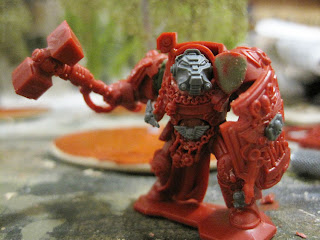 This one was alot simpler than Ratna, the arm was repositioned with greenstuff, and the symbols cut off and replaced with Cruxes from the Terminator boxes and eagles from the Commander sprue. The head was cut out and a helmet stuck in. The blood drop on the left knee was cut down to be a round gem. Everything else was just cut off.


Rather amusingly when playing with a random name generator one of the first that came up was Ba'al... guess they didn't want to forget their heritage :)
Posted by Gotthammer at Saturday, September 12, 2009