So the first Games Day to be seen in Australia in seven years has come and gone. Here are my recollections and experiences, as well as some info from the seminars.

First up was the venue - it was spacious, well lit and no problems finding it. Funnily enough it was next to filming of the reborn Young Talent Time auditions... not sure how they handled all the Waaaaghing going on though.
Still, a few people got some odd looks, like this awesome Commisar who arrived at the same time I did: 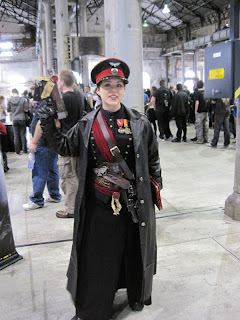 Sorry, I didn't get her name to credit
There weren't huge lines like those seen in the UK and US, with ForgeWorld's line rather large when I arrived at 10:45 or so (having worked until 1am that morning). They died down considerably later in the day, and it was organised that people picked up their orders and were moved to a central payment area with six registers going.

Arriving late I unfortunately missed the Black Library seminar, so no comment there :(
So instead I had a wandered around for a bit, catching up with some people until the design studio Q&A with Phill Kelly and Adam Troke. 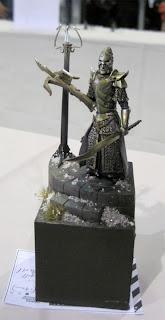 54mm scale in the Forge World Best in Show category
The Q&A was well populated and fairly interesting. Some points of note:

- In regards to new races they asked "raise your hand if you feel your army is laggin behind in attention?" and used the fair number of hands to illustrate the more pressing need to update the current crop of Codexes first.

- Adam did go on to mention Necrons and Dark Angels as two in need of help, but it didn't sound particularly to indicate any info on forthcoming releases.

- Phil commented he would change the Court of the Archon and Dias of Destruction if he could in Codex Dark Eldar. The Court was at one point planned for a boxed set so you'd have to buy one of each so it made sense to have it that way. The Dias was a last minute job, and needed more tweaking.
He also mentioned changing the Decapitator and making some units better and some worse, but no specifics on why.

- In regards to supplements like Cities of Death and Planetstrike they said the designers used tose as a change of pace or a reward "like desert", and they wanted to do more.

- This led into a discussion about global campaigns. They are limited as they can't have huge ones that change the universe as the results might mess up the story - Adam specifically mentioned that the results for Medusa V were not what they expected. The questioner brought up that it helps get gamers involved in the universe by having a shared goal. They did ask who would be interested and got a strong positve response.

- There was talk about the design process and how ideas come about. Phil said they are trying to change the process from "you will design this" coming from above to a constant stream of pitching ideas and having a more free-flowing creativity.
They have  a giant whiteboard where the studio just put up ideas for anything and get feedback and response on it. Assignments are generally given to the most eager studio member as they'll put the most work in, "and lots of unpaid overtime". There is however competition, including knife fights in the carpark, for some jobs so they painted the studio as very free-flowing.

- Someone asked about FAQs, and the reply indicated there's an assistant designer who is chiefly responsible for them all.

- On playtesting, Adam used the example that for High Elves he personally played 40 games, recording the results, as well as other studio members, White Dwarf guys, "their external playtesting group", and other in-house team members.
There was no fixed amount done though, and it is an elastic amount.

- When asked what they thought on balance, the reply was having a tough but fun game where it could have gone either way at any point. They did acknowledge that they sometimes screwed up, and that they all find it terribly embarrasing.

- A question was asked about release schedules, with Dark Eldar getting more models while some armies are still waiting (this got a chorus of "Tyranids!" from the audience). The reply was that they were changing to try and do a single major release for as much as possible with only some Special Characters being delayed as they can be troublesome to get right.
Ogre Kingdoms was used as the example of this.

- Phil then went on to talk about how they won't be re-treading Forge World, and the Mournfang are distinct creatures from the Rhinox riders. Forge World is there to flesh out the fringes and add depth was they way it was put, and they do their own thing.

- Jervis reads every letter he gets sent, and tells everyone in the studio about them. Adam did a Jervis impersonation for effect. 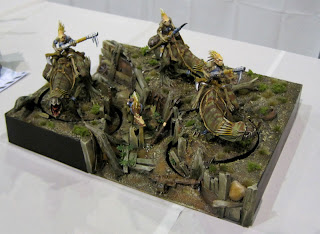 Forge World Best in Show category
After that I headed down to get Graham McNiel (who had spilt coffee all over himself at some point) to sign my copy of Thousand Sons. The queue was only about 25 minutes, though the signing at the city store on Friday night was apparently much, much bigger. Two guys from Darwin in the line behind me had gone there and given up.

Graham was very nice to talk to, and we had a chat about writing and whatnot, including discussion on making Space Marines seem superhuman and their role in the story. No ground breaking revelations to be had, but it was great to have a good chat with him.

Henry Zou wasn't there, or if he was he disappeared before I saw him. I haven't read either Anthony Reynolds or Matt Farrer's works, so I didn't talk to them. 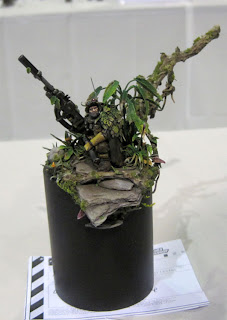 Single Model category
I didn't go to the Perry twin's Q&A as it started just as I finished talking to Graham. I didn't realise they were going to be there, otherwise I would have brought my copy of Rogue Trader for them to sign. They were here for Dreadfleet, having designed a large number of the ships.
It was rather odd seeing them in person as to me I always imagine them with the mental picture of their portrait in teh back of Rogue Trader or the early White Dwarfs. 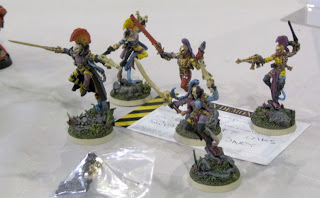 40k Squad
I did have a caht with Adam, mostly about kitbashing Chaplain Terminators and the merits of scrounging for bitz around the place. He did mention that Dreadfleet had probably been in the works for around three years total, but would have been around six months work done in one big hit.
Another comment was on new Codexes comign out (someone asked about Dark Angels), and he commented that it was hard to get to everything, but Dark Angels, Necrons and Sisters of Battle need re-doing, though he did add "though Sisters just got a 'hold-me-over' codex in White Dwarf and it's awesome!"

Phil signed my Ork Codes, and we had a talk about games designs (he's a fan of the D10 too), going retro (the 1st ed stuff was an influence on him) and understanding girlfriends with both being horders of stuff.
No revelations here as it was more a hobby chin-wag than anything.

I did some shopping, pickign up the exclusive short story collection, the new artbook, a poster and The Outcast Dead. Wait in line was probably about two minutes or so. 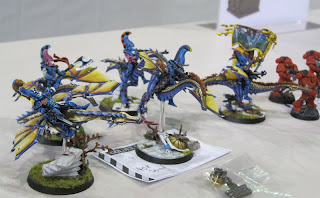 - I asked about any editorial control over what they create. I was told the only control there is comes at the start of a project, whether the pitch for a book/model is given a green light or not, and not in terms of any marketing team ("they don't have any" - Alan) or sales driven objectives.

- They were asked about the future of Finecast and the character plastics, and the inclusion of races such as Jokaero and Slyyth as minor notes in the armies.
The response was that they were wanting to include more when they could to give the feeling of a broader universe, as well as more opportunities for modellers. They can't guarantee that every race mentioned will be included though, as it still needs to fit in the army lists.

- Alan talked about introducing new ideas at some length, sparked by a question about computer games and how close they had to follow GW's mandate.
Basically they have to do as they're told, and can't introduce new things. If they have a gap they need filling they come to GW for a filler (such as the Orca in Fire Warrior). The only exception anyone could remember was Phil saying the Rail Rifle in Fire Warrior was designed by Kuju to fill the sniper rifle FPS archetype, and the studio liked it so much they adopted it - everything else is GW's doing. I was tempted to shout "metal bawksez!" or "spess mehreens" at them, but abstained.

He further elaborated that they won't be discarding  and races, as they learnt from their mistake with Squats (and he did specifically call it a mistake) and that they realise now that "they can't pretend like things didn't exist".

- There was quite a lot of talk about plastic models and designing them and whatnot. 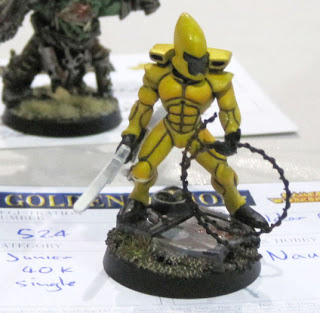 Junior Category
After that I had a bit more of a look at the Golden Demon entries and armies on parade, but had to leave to go to work unfortunately, so missed the awards ceremonies.

Relic also had a stand with Space Marine free to play on six TVs. I didn't have a go, but it looked pretty fun. I dont' think I'll be buying it just yet though.


All in all it was a great day, and I'm really glad I went. I'll definitely be going next year!

And if you want more GW goodness, head over to Tales from the Maelstrom where they've got a great interview with Rick Priestley.
Posted by Gotthammer at Sunday, October 02, 2011