At long last my copy of IA10 arrived after getting stuck in customs for an inordinately long time. 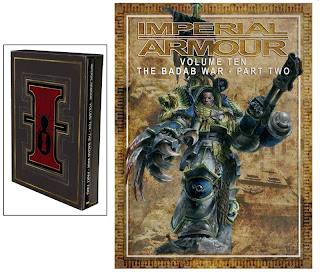 The very short review is that it's good, but not as good as IA9. This is no fault of the book, per se, but simply due to the fact that is describing an epic grindfest between the two marine factions, without room for much of the best bits of IA9 - the maneuvering and posturing of the two factions.
That's not to say it's in any way bad, it's still very very good, but IA9 set the bar very high.


Continuing the tale of the Badab conflict we learn more about the mysterious Minotaurs, the Charcharodons, and the Mantis Warriors get some page time too. There are some well done set pieces and even the siege of Badab feels energetic and fast paced. 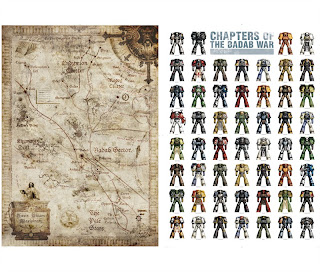 Rules wise there are a bunch of special characters (including some pretty fearsome dudes), the Caestus Assault Ram and the imfamous Achilles Land Raider. The Achilles now costs a little more, and StrD hits are not subject to modification.


The book contains a Marine siege breaker list, which looks quite fun and has a few interesting units thrown in, but is otherwise heavily restricted (an assault list with no drop-pods or bikes, and limited fast support).

Another interesting point is that the Power of the Machine Spirit for Land Raiders is clarified. It specifically mentions the conditions for the extra shot being shaken/stunned results and "one more weapon than would normally be permitted based on its movement speed" - siding on the no side for firing with smoke launchers.
Almost all the extra rules are written with very specific clarity, which is good to see.

Lastly there are the ubiquitous Apoc datasheets, which include a 4-6 Land Raider one where at least half must be Achilles varients (they get a super shot attack though). My favourite is a six dread team that go crazy in close combat.

Packed with the book are the slipcase (which is much nicer than the Vraks one, and wasn't crushed in the mail) and the truely gigantic (A0!) poster decorated with the various colour schemes of the conflict. I'd love to put it up, but I'm not sure where I'll find space.
Posted by Gotthammer at Friday, January 14, 2011