As with everybody else it seems I have been constructing some Dark Eldar, though I'm using them as pirates / mercs rather than Commorites (more on that at the bottom). First up, some Wyches: 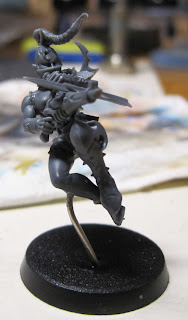 This lady was a fun one to make - I simply glued the two bent legs together (they fit fine without chopping) and turned her plait around 180 degrees. She's mounted on a paperclip secured on the underside with some greenstuff. 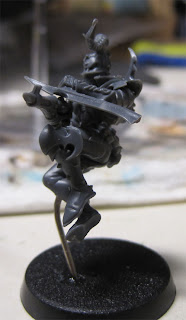 Mixed in some Hellion parts: 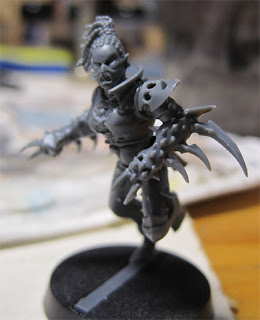 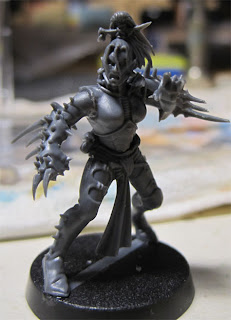 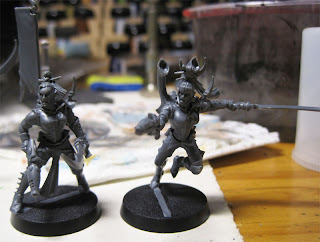 I'm using the power swords as Agonisers - everyone with a special CCW has an Agoniser, so they won't be mixed up. I just don't like the whips. 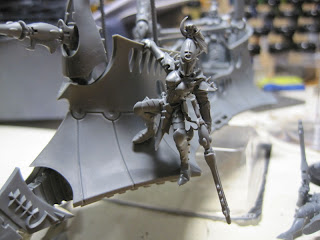 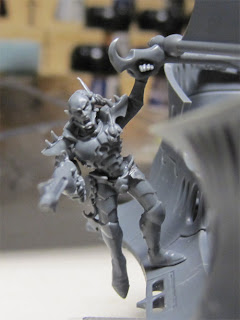 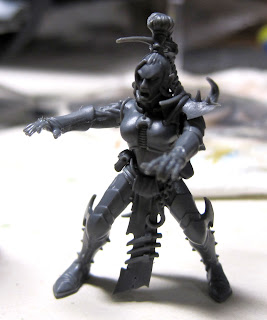 And now, young Jedi, you die... *scratches on invisible turntables*
I used the leftover Raider pilot body to make a Sybarite: 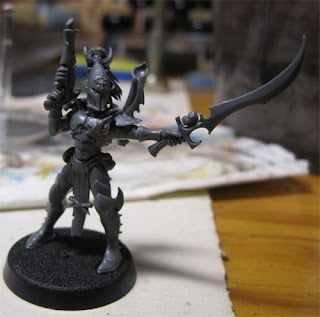 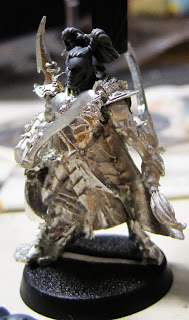 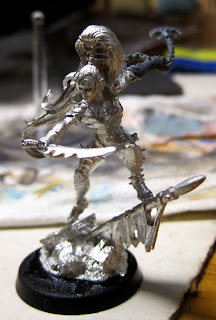 Changed her left forearm to the chain weapon from the Wych kit - it's functionally the same as another knife.


Their colour scheme will be a mix of purple, black and yellow - similar to the Archon on pg66 of the codex.


The basic inspiration is the RT era Eldar Pirates and corsairs, namely these guys: 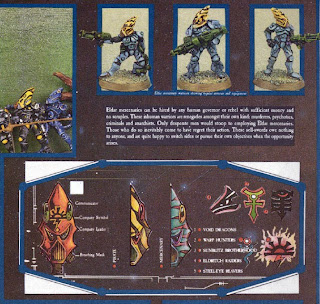 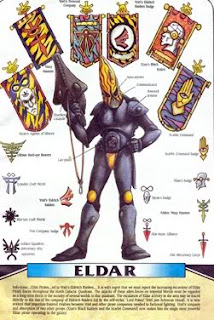 So they're technically Craftworld alligned and I won't be using any of the wierder stuff like Haemonculi, Mandrakes or other gribblies without some re-working/counts-as. Talos might get a Wraithlord standin depending on rules, and if the Scourges look as awesome as their artwork they'll be in.

The colour scheme will be purple as the main colour with yellow and black accents. The yellow will also get tiger striping. I won't be doing the whole helmets as the guys above though, but the shoulder pads and tabbards.

Basically they're a group of piratical raiders based out of a Haven Spire, using Eclipse class cruisers - mostly because they look the coolest. Another reason for the name is I was giving them an Imperial designation of The Eclipse Corsairs. A thought was to have that name come from their use of the cruiser, as well as their logo. 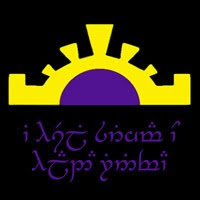 The logo is based off the Sunblitz Brotherhood icon and one of the old forms of the Eye of Horus. It is a symbolic representation of an ecliped star on the horizon - something like this cut in half: 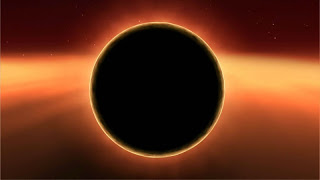 Loosly translated from the quenya (in Tengwar Annatar script, to make it a little eviler) the text reads :

which loosly translates to "The outcast mariners hidden from the sun's rays". The idea is to have them coming from Luganath craftword, who's namemeans "Light of fallen suns".
As Lugganath is of the opinion of escaping into the Webway Dark Eldar style and has aided humanity in the past I was thinking my crew would be of the more millitant members of the Craftword - those who think giving up is a terrible idea, the Eldar should be trying to restore their glory and that humans/Tau/Ork/whoever else are insects etc etc... ie they wish they'd been born on Biel-Tan
In addition to this noble, if misguided, group there are assorted ne'erdowells, criminals, kinslayers and such who have sought sanctuary after exile.

They leave as Outcast corsairs, but raid colony worlds and are generally very aggresive in their manner (wiping out existing colonies rather than just preventing new ones). This doesn't sit too well with the Craftworld who cut them off, but they still need supplies so they trade with their Dark Kin and later copy their designs.
Lugganath's interest in the webway also gives a reason why they'd be as adept as the Dark Eldar in using it (ie why I can use portals and such), as well as the trading.

Posted by Gotthammer at Saturday, November 20, 2010