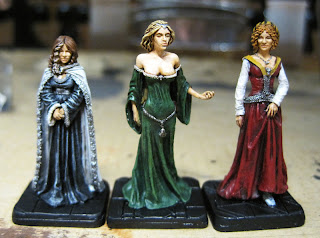 These three lovely ladies are from Dark Sword Miniatures, part of their line to of figures based on George R R Martin's A Song of Ice and Fire, though I just painted them how I felt like. 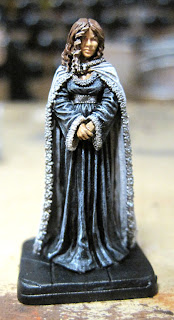 Sansa Stark, who dislikes giving me a decent photo. 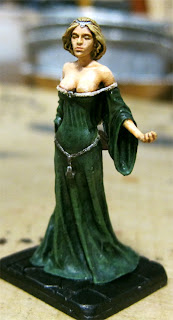 Lannister Lady in Waiting, who uses a lot of double sided tape methinks.

Catelyn Stark, who I thought looks very much like the lovely Cate Blanchett. Might even be worth getting a second to make into a Galadriel since GW's are pretty terrible. 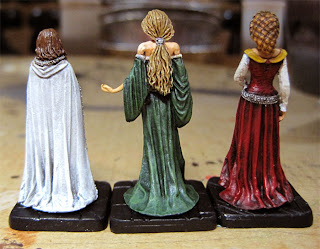 Group shot from behind.


Here's one for the ladies: 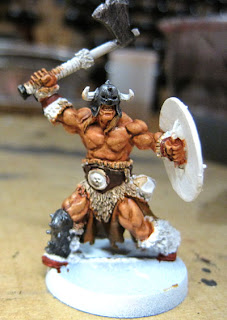 
Also on the workbench I've got Studio McVey's (as in Mike) limited edition Lisbeth (I have #52): 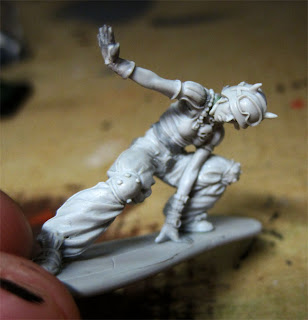 First thing I did was swap her around on her board to make her a goofy footer. This is mostly due to her stance - it is very much putting all her weight on her left foot, which would indicate pitching the opposite end of the board upwards. The original stance had this the other way around, with her leaning away from her pursuers yet going upwards.

Another issue is that it is very rare for a skater/snowboarder/surfer to grab the board to their front with their leading arm - doing so would make it very difficult to see where you're going. This is of course the opposite when doing a method grab when you use the leading arm for the very same reason.

So, after swapping her around (and re-sculpting the fingers on her left hand [they were part of the board]) I chopped off her right hand and cut up her shoulder to bring the arm down and to the outside in a more natural position for balancing. Then it was sculpting on fingers. 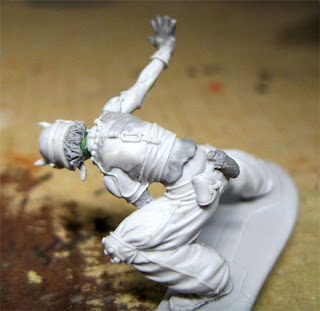 I've also given her a singlet and converted her hand grenade into a water bottle. The holster for her now non-existent pistol has been cut down and I'll be adding some wires to her ears as if it is a MP3 playr case or somesuch. Her thong was also changed to simply be high underwear (it seemed like it would be uncomfortable). She also got some hair at the back.

Colours will probably be khaki pants, black singlet, red fancy top, and a white/blue board with a hibiscus pattern .
Posted by Gotthammer at Monday, August 02, 2010