To start with this is to adress the disparity of survivability between Gargantuan Creatures (GCs) and Super Heavy Vehicles (SHs). This is most noticable when firing StrD weaponry - GCs only take one wound with no drop in combat performance. Superheavies can be totally destroyed.

Compare a Hierophant at 1250pts to a Reaver at 1450pts. The Hierophant has 10 wounds, an invulnerable save and can regenerate wounds. The Reaver has 4 void shields, 6 structure points, and must spend a turn doing nothing to self-repair. Also it can be immobilised or simply lose all its weaponry.

Structure points / the damage table are in no way as good as wounds - where a GC can keep its combat output consistant regardless of its health a SH can be rendered effectively useless in 1 turn.

How do I propose to fix this disparity without making SHs untouchable?

A simple one, it means that a Baneblade never looses its main gun, and Stompas can alway skrump things good.

It does mean they need to be destroyed to be put out of action, but that's really the same as a GC.

Another simple idea, because at the moment damage control sucks. If you're in a situation where you need to use damage control, you really don't want to spend a turn doing nothing for a 5+ chance of fixing something per structure point (which you've probably lost some anyways). Also when you've only got four or five turns per game you don't want to spend a quater of the game doing nothing with the big toys.

I'd allow any Superheavy to use damage control at the start of that player's turn, and it applies immediately. Any successful Damage Control rolls can be used to cancel a Drive Damaged, Weapon Destroyed or Gun Crew Shaken result.
It doesn't restore structure points, but does mean that there is more big guns staying in the game. 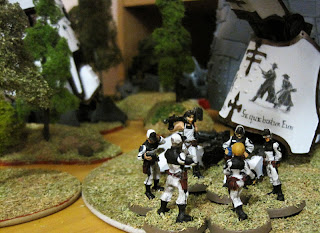 Pretty obvious really, but I wouldn't combine it with option 1 as that would swing the balance too fat the other way.

If a SH is assaulted by a GC or another SH in place of striking any blows it can elect to kick it into reverse and pull back D6" (2D6" for walkers) directly away from the GC. Any units (friend or foe) the SH moves over are tank shocked as normal. If the SH cannot move the full distance back due to impassible terrain or other SH/GC units it stops 1" away.

However, any attacks made by the attacking SG/SH hit automatically.

A tactically interesting choice as you could end up getting wrecked worse than normal due to auto-hits, but if you survive you'll not be locked in combat and have a bit of breathing room to fire.

Currently SHs and GCs run D6", a pathetic amount considering the size of most superheavies. I'd up running for GCs and SHs to 6" automatically, and any Fleet units can run and shoot.

So there're my ideas, personally I think 2, 3 and 5 together would keep it fair as there's a bit for both. 4 could be too powerful, but I think the auto-hits and the possability of tank shocking your own guys and falling off the board balances it. Option 1 is a bit too much unless both sides have a number of SHs I think.
Posted by Gotthammer at Monday, April 19, 2010