Galadhrim and an essay on elvish hair colour 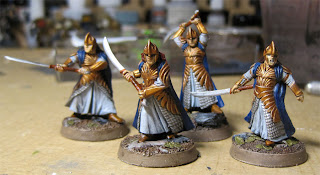 Finished painting up some Galadhrim infantry for my Lord of the Rings force. I'm personally a bigger fan of LotR over WotR - the skirmish system suits the material much better to me.


I started with a white undercoat, getting a very even finish - luckily the can held out just long enough to get them all done.

Cloaks are Regal Blue drybrushed white with a blue wash.
Their tabbards are Space Wolf Grey washed black then heavily drybrushed white.
Straps and boots are Snakebite Leather, the sword haft Bestial Brown.
Silver armour/blades are simply Mithril Silver washed black. The edge of the blade got a white drybrush to accentuate it.
The gold armour was first done in Shining Gold, washed black, drybrushed Burnished gold and then drybrushed Mithril Silver. It was then washed in Ogryn Flesh.
The silver drybrush really accentuates the edges, but the wash tinges it a slightly reddish colour so it blends better. 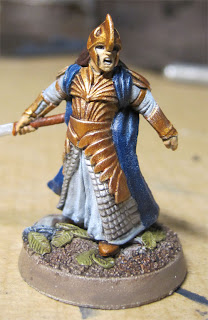 The bases are by Iron Halo, from their Wylde Wood line. They had very little flash on them and only a couple of minor bubbles in one or two rocks (this is out of the thirty odd I've used so far). They also have a nice weight to them so the models are very balanced.

The bases were painted with a Khemri Brown base, leaves in Gretchin Green, roots in Astronomican Grey and rocks in Charadon Granite.
The whole lot was washed with Devlan Mud, then the rocks drybrushed Fortress Grey then White.
The plain textured areas had a few dabbing drybrushes of Macharius Orange and an Ogryn Flesh wash to add some tone to them, though it doesn't really show in the photos unfortunately. 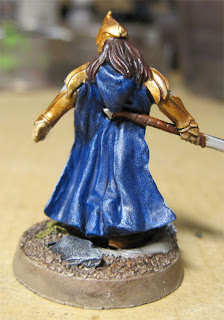 It may seem a bit odd to some to have forest dweling guys on brownis-orange bases, but given Middle Earth is prettymuch the English countryside I've modeled it on them being inside a forest: 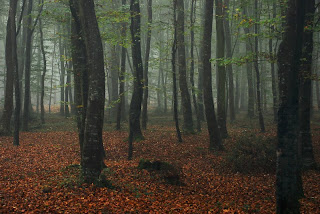 It's something I remember quite vividly from my trips to the UK as it is very different to the Australian bush. Also any of the TV adaptations of Robin Hood provide good inspiration (especially that acid trip one from the 80s where Robin hangs out with Herne the Hunter).

But anyways, that's what the deal is with them.


Also none of my Galadhrim will be blonde as the inhabitants of Lothlorien are predominantly Silvan elves, who are an offshoot of the Nandor, who are in turn descended from the Teleri.
Telerian elves are predominantly black haired, save the silver hair of their royal house (including Elu Thingol and Celeborn).
The other main heratige of the Galadhrim would be Noldorian refugees from the War of Wrath (including Galadriel, but more on her below). They have predominantly black hair also, but browns and red were not uncommon.

Golden hair is introduced from the Vanyar, who all stayed in Aman, via Indis marrying Finwe the king of the Noldor (and possibly other Vanyar marrying Noldor who were later exiled). This is why Galadriel's golden hair is such an unusual thing in a Middle Earthen elf, it coming from her grandmother.

So basically blonde elves are a great rarity outside the realm of the Valar, Galadriel and Glorfindel being prettymuch the only ones of note. Legolas' hair colour is never definitavely described but being Sindarin he would either have black hair or possibly, due to being royal, silver.

This is 300pts of Galadhrim, plus a banner bearer as I'd already based him. With any luck I'll be taking them on Sunday (with even more luck, painted) to get some games in.
Posted by Gotthammer at Monday, March 01, 2010