All the pics can be clicked for larger versions. 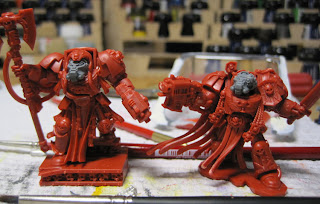 These guys were pretty easy - chop off the BA symbols and remove the heads with a scriber. Attach spare Terminator head and done. The Librarian's head needed a bit more trimming, taking off his little ear knobs and the forehead lamp to get it to fit in.
Rather annoyingly though, the Captain seemed to be cast poorly, and bits kept shattering off. While trimming off his pimp chalice atop his suit a big chunk of the torso suddenly split away. Also his cape kept snapping, unlike the other minis from the set or any other GW plastics. Very odd. 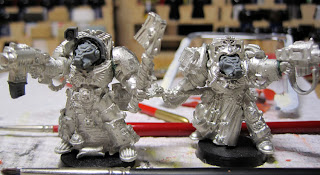 The Chaplain mini came with a mis-cast left shoulder, the Crux almost totally gone. I decided to file it down flat and will paint on a skull icon in its place. The head swap came about as I somewhat dislike the original's positioning - it's looking too far down for my liking. Similarly the belt feed always looked silly to me.
These were fixed by removing the head, attaching a plastic one, and cutting the arch piece from a spare torso (otherwise the head stuck out too far and looked very odd). The ammo clip is from the plastic box, flipped upside down and backwards, as for some reason the out of syncedness of the two clips is reversed on the Chaplains gun!

The Librarian was a matter or patient use of a scrip to remove the head, then a slow process of whittling down the helmet to fit. The helmet sticks out more than a normal marine's, but it has to to be able to look the way he's firing. 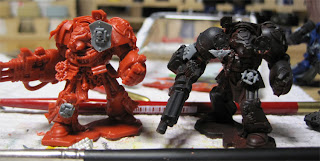 The Heavy Flamer was pretty basic, the only tricky part was removing and re-fitting the shoulder shield. I also cut the left torso scroll shorter to open up the view of the waist more - I find wihtout it the figure looks 'fat'.

The Assualt Cannon was cut off at the elbow and re-positioned - I never liked the weird "firing across himself" of the original. Now he's doing a dramatic lunge sort of thing. 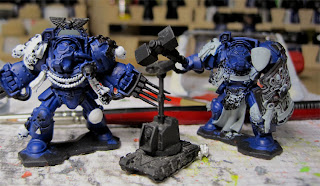 Much better than the Gazebo Skull on wheels GW made if I do say so myself.

A clearer picture of Company Sergeant Gunnvarr "Gunner" Yadiz. I have a slight problem that my guys are mostly blue... and Genestealers are mostly blue... hrm... maybe I'll go black carapace with purple squisy bits.
Posted by Gotthammer at Wednesday, October 14, 2009