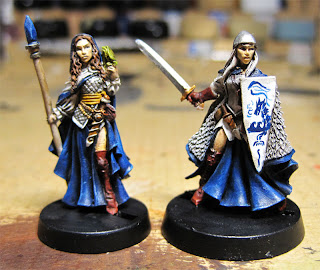 Painted up Myrianna and Ingrior from Red Box Games tonight, and quite happy with how they turned out.

For their cloaks I used Ron From the Warp's 'suggestion of colours' technique, though modified to my methods. I started with a black base, followed by a heavy drybrush of Regal Blue, then lighter goings over with Ultramarines Blue, Enchanted Blue then Ice Blue.
They then recieved a glaze of Asurmen Blue, followed by another (very light) drybrush with Ice Blue and Skull White on the extreme edges.

It worked incredibly well, and if I hadn't already painted up a whole bunch of my Rainbow Warriors already I'd use it for them. Ah well. 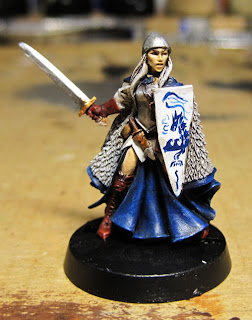 Ingrior was quite simple, and I went for a high contrast scheme with her. I wanted her to look very clean compared to, say Gunhildr so I didn't do any washes on her shield, sword of helmet. She only recieved a very careful wash on her breastplate for shading.
The fur lining of her cloak was simply done with Fortress Grey, washed in Devlan Mud then Badab Black, then drybrushed with Skull White. I think it makes it look very well looked after and, as I said before, clean.

Her shield is Regal Blue over white and based partly on the Zodiac sign of Capricorn, one of the Space Wolf Great Company runes and adding in a dragon.
With her hair I wanted to go a somewhat platinum blonde look, so simply washed Skull White with Devlan Mud, then drybrushed white over it again. 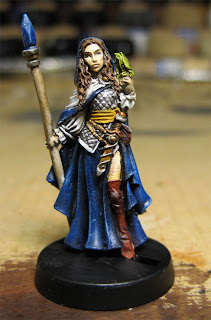 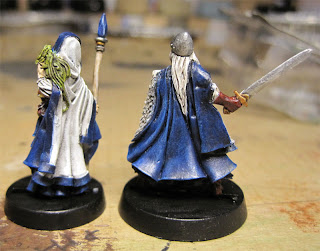 I painted them together to get a unity between them, and all up it took about three and a half hours for the pair from blister to done.
Posted by Gotthammer at Monday, July 12, 2010