So I took a break from 40k for a bit and decided to paint some vikings, namely the new mini by Red Box Games, Gunhildr of Utherby. Much like her 'sister' Vilhanna she was a great pleasure to paint, full of character and such.

But while I was painting her I was thinking about one of the more important aspects of painting that many people often forget about - colour composition. Sandwyrm at The Back 40k has already covered chosing the right shade of colour indepth, so I shan't go over it again. However I will ramble for a bit about how to put those colours on your mini. 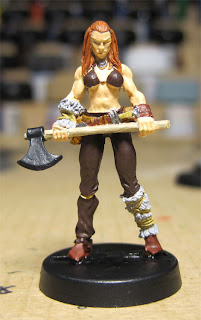 Here's Gunhildr in her base colours. By virtue of her being a barbarian she is in rough and ready clothes, with a variety of strappy bits and fur, and obviously has a large area of exposed skin.

Looking at the mini I could see there would be a large area of exposed skin (light), so to contrast this I chose a dark colour for her clothes (I use the term loosely). However using a pallette of browns exclusively meant I had to retain contrast internally, or the details would blur together and be essentially unrecognisable. 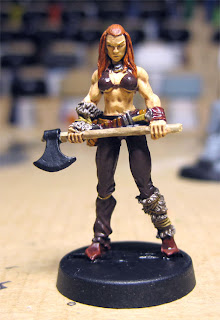 I also had a limited number of colours so there was balance in the shades - the colour of her boots is repeated in her knife's sheath and left bracer. Similarly the ties on her left leg are the same as the hilt of her knife and the leather around her right wrist. 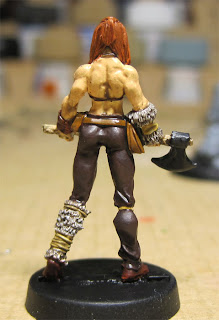 By using a light wood colour for the axe haft I stop her from being too contrasting between her top and bottom halves as it is similar in tone to her skin. 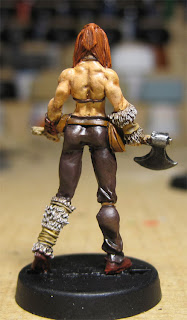 So how does this relate to 40k? Well for a tabletop army it means using a high contrast scheme looks better from a distance as it is easy to pick out what's what. For example think of the 2nd ed Ultras with their bright red bolters and yellow trim. Even in the tiny pictures in the rulebooks you could easily pick out their shape and the details.
If you go to coolmini and browse by the gallery looking at the thumbnails you may notice that many of the highest ranking minis look like pastel coloured smudges. This is due to their amazing level of blending so, much like a real person, from a distance they're kindof a blur.


But is this a bad thing?

I think yes and no, personally - yes in that pastels are never a good idea, and I like high contrast 'comicbook' type minis. I think they look better on display as they catch the eye (my eye) more than more realisticly painted minis (perhaps why I never got into historical minis).

No from the sense that the people who can paint like that are always coming up with the hard work to figure out new techniques for the rest of us to simplify ;)

This guy is a perfect blend of the two styels I think. He has the masterful blending and shading but the red of his cloak is dramatically different to his armour and skin. Also his base is a counterpoint to the mini as a whole. Being larger scale helps, but regardless the colour scheme could easily be shrunk down. So there're my thoughts on the matter, and a finished mini to boot.
Posted by Gotthammer at Saturday, April 17, 2010