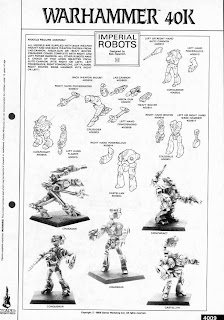 A poster on the BoLS Lounge asked how to transfer the Rogue Trader era rules for Robots into 5th ed. This is my take on them.

Unit Composition: 1 Controller and 3-6 Robots. A second Controller may be purchased if the Maniple contains 4 or more robots.

Some of the most fanatical soldiers in the ranks of the Imperial forces, the Adepts of the Legio Cybernetica swear oaths of loyalty more fearsome than most Astartes warriors to try to erase the stain of their Order's betrayal during the Heresy. Fighting alongside the immortal, mindless machines of the Mechanicus their lot is usually a short one.
They go into battle with their charges, seeing their duty in the thick of battle to tend to the machine's spirits and bodies even when other mortal warriors would quit the field. Casualties are high, but the Maniple Controlers will sacrifice themselves a hundred times over for the sake of one of their precious machines.

Being inorganic, all Robots ignore Crew Shaken and Crew Stunned Results. Robots will always attempt to Death or Glory a ramming vehicle.


Programs: Each individual Robot is given a Program before battle. This cannot be changed during the battle, and should be clearly written down on the army list to avoid confusion. The three programs are Assault, Secure and Destroy.

The program is consulted before the Robot acts and must be followed even if it would be tactically better to ignore it, but it may be overridden by the Controler using the Command Box (see below).
When a command states to move towards an objective the Robot will attempt to move in a straight line, even when this means moving through difficult or dangerous terrain. Again, the Command Box can override this.

During each phase consult the Program to determine the Robot's actions.

When the Robots are deployed (or declared in Reserve), nominate an Objective on the board as the Robot's target. If no objectives are present, place a marker anywhere or nominate a terrain feature. Should an Objective be destroyed, the target Objective will become the closest objective to the Robot.

Nomintate a type of enemy unit at deployment (eg Infantry, Jump Infantry, Assault Marines, Vehicles, Tanks, Land Raiders) - be as specific or as vague as you like, but keep in mind the restrictions of the program. This type of unit is Target Unit.


Slave Programs: If two or more Robots are loaded with the same type of Program they can be slaved together. They are treated as a unit, maintaining 4" coherency, but do not treat Immobilised results as Wrecked - the immobilised robot is left behind, and each Robot must be targeted individually.

When measuring closest distance for the purposes of the Program, it is the closest to either/any of the Robots that is not immobilised. Should all the slaved Robots be immobilised, or their be two precisely equidistant targets, randomise which robot is measured from.
Example: Robots A and B are slaved together with the Assault Program loaded and are both immobilised. I roll a D6, with a 1-3 meaning A, and a 4-6 meaning B. I roll a 5, and both Robots attempt to fire on the unit closest to Robot B.


The Control Box: Each controller is issued with a Control Box, which can be used to manually override the Robot's programming for a short period. Every time a Robot is activated and its Program checked as to what it may do, the Controller may attempt to override the machine.

If the test is passed the Robot may ignore its Programming and, for that phase, act like any normal unit in the game.
For example acting under the Secure Program, a Robot may be prevented from moving towards an objective (or moved around difficult terrain rather than through it), a Robot's weapons could be targeted at a unit not on the Objective (because they are out of range or a threat nearby is more pressing) etc.
If a group of Slaved Robots is present, only one check is made for the whole group.