First up are the three dudes I've finished:

1st Lieutenant Aubin "Outlaw" Hawkins, Company Sgt Gunnvar "Gunner" Vadiz and Trooper Veteran Teng "Target" Takis (click for larger).
I finished Takis tonight (his base still needs blacking), and added helmet stripes to the other two. I had been unable to think of a way to represent the stripes on a terminator helmet, but it needed doing as without they tended to look like Ultramarines a bit too much.
I was inspired by the helmet stripes on the terminators in Siege of Vraks III, and altered to suit.

Trooper Veteran Jurgen "Curly" Ratna, Trooper Veteran Coeus "Eggs" Hellad.
These guys have had their base coulours layed down, giving a good idea of how they look de-Blood Angeled. Hellad has a blood drop icon on his belt, and Ratna has one on his right shoulder, but I'll be using them to represent the Medallion Crimson.

Why worry about medals and such? 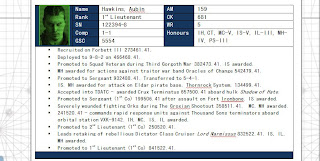 As part of the Cradle of Despair campaign I've named 30 individual troopers and detailed their squad assignment - for many of them I've given them detailed bios like the one above. Their serial numbers are all sequential to their reruitment dates, and the numbers of purity seals match those on the minis (this is part of the reason it's taking so long to do).
Posted by Gotthammer at Tuesday, December 15, 2009