Captain Loressha is just about done - only need to do her back banner. 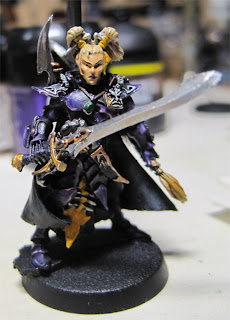 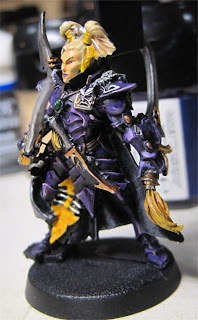 Dassanta is coming along nicely now, though she was giving me serious headaches - the colours weren't working and no matter what I did the detail wasn't coming out well defined or crisp. It was getting to the point where I was thinking I'd have to strip her back to metal and start agian honestly. 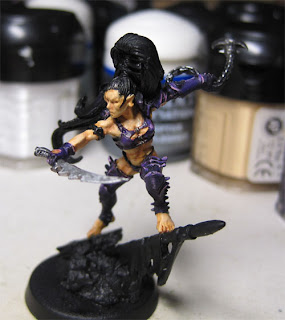 But, fortunately it didn't come to that and all is well. It was only around the Gryphonne Sepia wash of her skin that it started coming together.
I'm thinking of giving her tattoos down her arms and back, Yakuza style, but I'm not 100% sold on the idea. Well, I like the idea... I just don't know if it'll look any good. 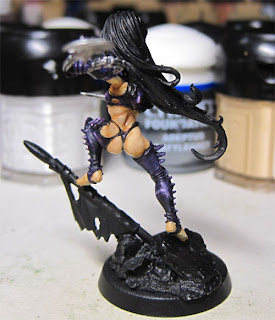 Who got da butt? Brak got da butt!
I couldn't find a clip of that, so have some Sisqo linkage instead.
With this army I'm trying lots of new techniques - heavier shading, line edging and a 'rougher' style. This is partly inspired by Ron From The Warp's Deathwing and Space Hulk minis (who also inspired me before) in terms of not having 100% paint coverage - by which I mean they're wearing purple armour, but the model isn't fully based in it, leaving the shadows black.

I've also been more immediately spurred on by THIS POST (read it, it's awesome) by Dave_G over at Wargaming Tradecraft. I'll just be lazy and quote my comment there here:

"I sometimes have to remind myself as a painter to not get stuck doing the same things with my models and to try new things rather than just playing it 'safe'.
It doesn't always work but when it does it is certainly more rewarding seeing the job done than simply going the tried and true."


So I'm pushing the envelope, thinking outside the square, going fastermax, reaching over the top and mastering the ass. I'm also using Dave_G's posting of the 'alternative styles' of Sketching and Outlining for a bit of inspiration (I liked Borderlands art style, pity I didn't like the game itself) - I'm being rougher and more carefree with the shading and highlighting. That's not to say lazy or haphazard, but focusing more on the feel of the model than getting it 'perfect'.
This could also be to do with getting back into drawing again as I tend to be rather sketchy there, so it's probably bleeding over into my painting.
Posted by Gotthammer at Monday, November 22, 2010