As the title says, Lisbeth (by Studio McVey) is all done now: 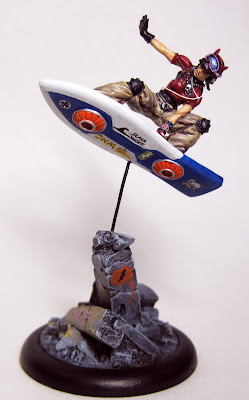 Close up of Lisbeth herself: 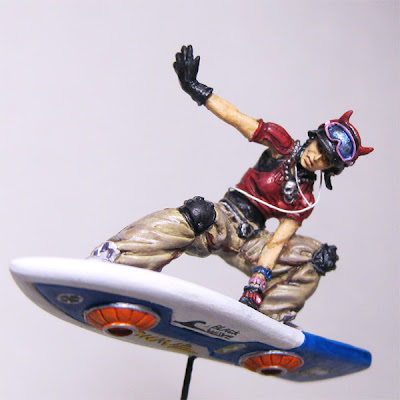 Here you can see the re-sculpted right hand, the modifed right arm and the earphones. 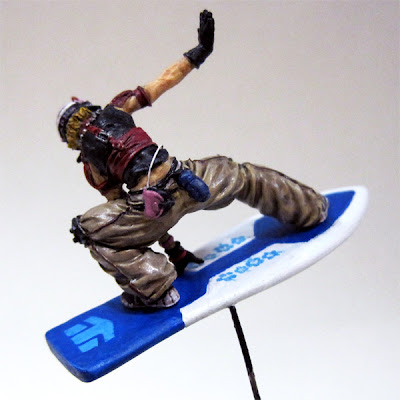 I just went with a few hibiscus on the board, and an Etnies logo since it's kind of like an arrow. Good view of the mods to the pistol holster, grenade and the added singlet. I also gave her proper briefs, rather than a thong, though I decided against trying to write 'bonds' on the waistband (I considered it though). 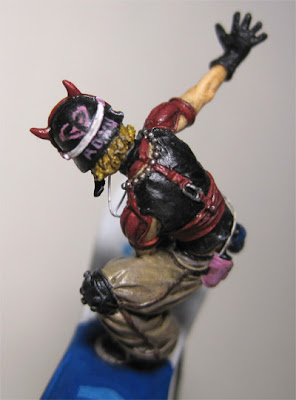 Roxy logo on the back of the helmet - sorry 'bout the glare - and there's a Dead Kennedy's logo on the left. The rightmost one is based of some public transport system logo (I was trawling google for logos).


Bottom of the board: 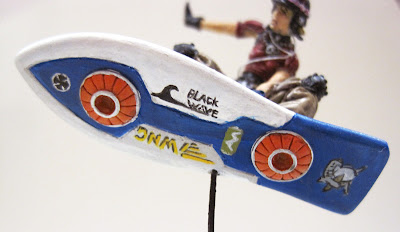 Decided to not go totally grommity and cover the thing. I figured a mix of surfie and skatie logos would work best, as she's dressed skate, but is (obviously) surfing. The nosemost is the Independent logo (maybe they make hover dealies rather than board trucks in the future), and the one on the tail is the Sharka Surf co's.
The middle three are ones I just made up - Black Wave sounds cool, WNG is meant to sound like 'wing', and I figured I should put something relating to flying on there. I was originally thinking a wave with a wing coming off of it, but I'd already put a few waves on her already. The green one is meant to be mountains, but it's a bit vague.

The pink thing and the green girl are based on some street art I found on google, but the thinking stick man and the WCSFC (an in-joke from work) are my own. The background colours were stippled on with a small Citadel drybrush to give it the sprayed on look. After they were done I washed them black and gave them a light grey dusting to weather them.

A very nice model to paint, though the angle I've put her at makes it a pain to photograph her nicely. It's like very shot either has a bucket of glare or the camera auto-focus decides to pick the wrong bit (it's fond of her right knee and the back of her board).

But still, very happy with how she turned out.
Posted by Gotthammer at Monday, October 04, 2010