My copy of IA9 arrived today and I've given it a once over: 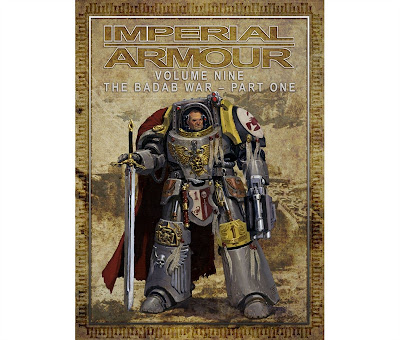 "I'm Commander Culln, and this is my favourite book in the series."

Best IA book yet. The first half is setting the scene, describing how the events of the war came to be and imparting lots of info about the Imperial Tithe, 'normal' marine activities (not crusading) and the interaction between the Administratum and Astartes.

When the war starts the actions are describe concisely, but still manage to be action packed. One of my favourites involved a team of Raptors wearing customised armor for stealth to infiltrate and shut down (with extreme prejudice) an orbital defence station. There are many more examples of marines doing more than drop-podding or rhino-rushing, so it's good to see them getting some character there.

The chapter backstory sections are good, though they get a bit samey with the loyalists mostly being 'super hardline and noble' types. However this fits with who would respond first to a renegade Chapter. Another good part is that they have the 'nobler' chapters being re-deployed mid-war, obstensibly to refit and rebuild, but with the implication that it is to bring in more psycho chapters who will have the stomach to wipe out their brothers.
Like the Minotaurs - who are total lunatics, announcing their appearance in the war by annihilating a renegade world, and then reducing a sector's civilian population by 20% through collateral damage in four months. Apparently the Spaaaace Shaaarks are worse, but they don't appear yet.


The art is wonderful, with a starchart updating as the story progresses as to who controls where. Also there are lots of little callout boxes with tidbits and asides about minor factors, such as navigators, what the deal is with the Tigers Claws, what the Mechanicus is doing and so on. 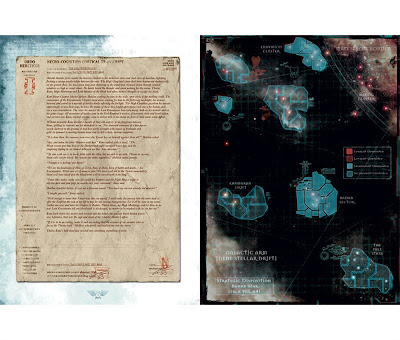 The boarding action rules look fun - they're an add on like Cities of Death, where you play with strategems and special terrain setups. There are rules for vacuum fighting (Str4+ get rending, blasts are pinning), and even on outer hulls (you can get blasted into space!).
To add into it there are even rules for the 'shipquakes', as the defending vessel starts to fall apart. The writers suggest playing with planetstrike for a super deadly and anarchic game.

There is a campaign system, which has several special missions for it (though they are optional, but you can play 'The Angstrom Incident'). I haven't given it too much of a look over, but it seems ok.

There are the usual FW formatting issues. I found a few places that could have done with commas, and one totally incomprehensible sentance. Decimate was used a couple of time when the implication seemed to be more like annihilate.
Also a bug seems to have got squished in the binding machine... I was noticing these weird glossy lines on the edges of the pages, and then I found a small blood smear and what seemed to be the crushed remains of a fly or the like. Brutal. Like the old KISS comic that proclaimed the band mixed their blood with the ink for printing. Or FW are very slowly falling to Khorne worship.

Probably one of the best books they've done, but I am a lifelong Marine player so I am biased. If you have no interest in Marines it is basically useless to buy, but worth borrowing for a read. Marine players will probably love it, and I'm giving it a 9.5/10 so far.
Full review to come soon.

Additionally the catalogue update, featuring the new models, can be downloaded here.

Also there is indication there will be new Terminators on the war from FW - there is a pic of a termie with a Mk5 style helmet, studded shoulders and kinda hooked lightning claws (with a chainblade in the palm). I know someone posted a pic or mentioned seeing it at Games Day, but I can't find where. It doesn't seem to be a special character either.
Posted by Gotthammer at Saturday, October 09, 2010