So here is my report from today’s Games Day Australia 2012 in Sydney. 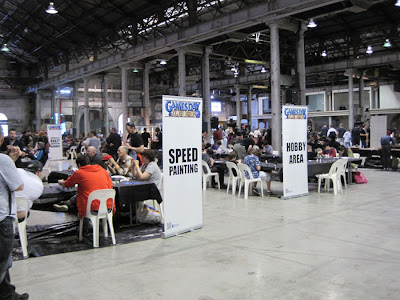 First up were some changes to the venue – they’d improved the layout and positioning of the various events and stalls, as well as keeping the Forge World pre-orders separate, so thumbs up for that. The gaming area was shrunk to free up more space for the studio crew and hobby area, so overall the whole central area felt much less congested. 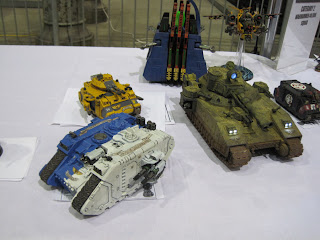 Don't know if attendance was down on last year, but it felt a little quieter. Mind you I spent almost the whole day in seminars so...
Parking was much easier as we weren’t competing with Young Talent Time auditions. 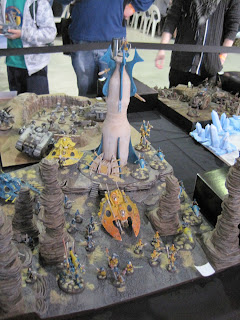 I missed the Black Library seminar (again), so went and said hello to Jes Goodwin, who signed my Compilation, which was pretty rad. 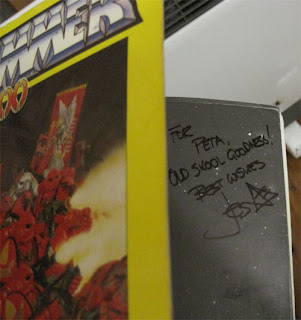 He had his original design sketches which were amazing and drool-worthy (the Sslyth was phenomenal! Makes me want to buy one, lol). When I asked he said he preferred no photos of them as he’s been burnt before by his designs being copied by “those companies that spring up making little bits”. Understandable, but I’m sorry I couldn’t share them with you. 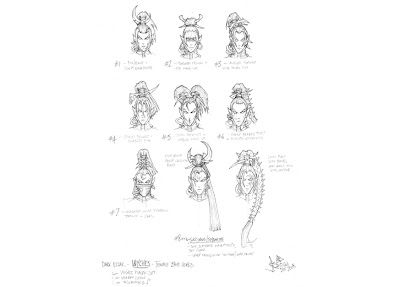 The original is so much better...

I stood in line for a bit waiting to look at the Golden Daemon, got bored, left the queue ran into a friend who had apparently not been home since seeing Apocalyptica last night, and was still pretty plastered. He’d apparently accosted Alan Merrett earlier about there being too many queues and it being confusing, ha ha.
And speaking of Alan, he didn’t speak at any of the seminars like last year, but was floating around and rather oddly directing the lines at the shop… 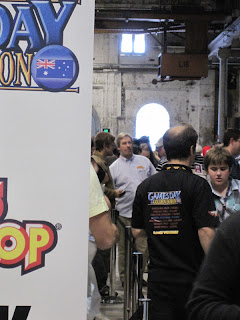 So then it was time for the first seminar of the day – and boy was it a big one: Forge World with Mark Bedford.

- The way he sees it, GW is like cake, and Forge World is like putting cream and cherries on top… well maybe not cherries but cocaine (yes, that was his analogy).

- Flooded with Marines? Well, they sell. Surprisingly everyone was very, very open about this fact and didn’t try to hide it in any way shape or form.

- Warlord Titan? Big kits are a balance of cost in time vs how much they’ll sell realistically. For instance the Manta took one and a half years for Will Hayes to produce, during which time he wasn’t getting much else done. Could he have made fifteen other kits that would have sold more in that time? That’s the numbers they run and why big kits are rarer. They do want to make a Warlord though.

- All they FW guys collect and play, and that’s often a trigger for nostalgia (“remember the X?”) and re-creating older units. 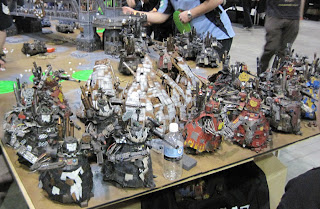 The other side was all Baneblades

- Their design process is very flexible and reactive. They can go from nothing to production in the space of a month, but that is rare.

- The designers often do things of their own volition at home. The Tomb Stalker came about when Will Hayes brought it into the office and said “look what I made, reckon we can sell it?”. They decided to give it a go and have since sold “bucketloads”.

- Mark used to work in greenstuff, but now uses Super Sculpy as it doesn’t dry until he wants it to.

- Forge World was the brainchild of Tony Cottrell, who had been making some custom turrets that people were eating up. They hired on some freelance crew and started producing the first vehicle kits and the statues/busts. While the statue market slowed, the vehicle kits exploded.

- Apocalypse was the best thing to ever happen to Forge World, and nearly killed their production staff (in a good way).

- They would like to do what they did with Dark Eldar and release companion kits soon after a Codex launch more often.

- The terrain and Epic kits were discontinued due to sales not justifying them. They do have a permanent terrain guy now though, as with the Realm of Battle tiles and fortification rules they can tie the terrain pieces into the IA books more. 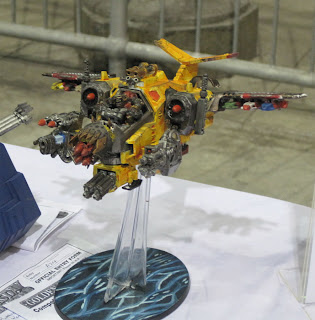 - That Bran Redmaw mini seen but not released? Gone. Mark wasn’t happy with the quality so asked for it not to be released. Another sculptor has taken over the character.

- They monitor the GW studio release schedule to avoid putting something out just before a new codex (ie why Necrons are due now, not last year).

- They deliberately put extra characters in books, Badab being a prime example, so that if they have a spare moment they have a backlog to draw on for ideas.

- Next book is Necrons, Minotaurs and Death Corps of Krieg.

- “So we’ll be doing a big Necron vehicle.”
“It’s not just going to be a bigger pyramid, is it?”
“No… it’s an upside down sandcastle.”

- A Dark Eldar superheavy would fit their raider aesthetic, but still be big, “like and ocean liner”.

- I asked later about the low content of xenos in some books (particularly corsairs in IA12). Mark’s reply indicated there will be more in the Dark Eldar book, and that sometimes they hit time constraints or ideas just don’t work and they don’t have time to redo them. 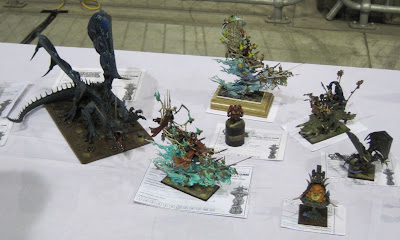 - The books are harder to write, as “you can’t kill off the Empire… ok, you’re all Nurgle now”, while in 40k you can blow up planets, systems or sectors with no worry. It’s also harder to explain why Khemri would be fighting Lizardmen in the Forge World format.

- Working on a Blackfire Pass book

– Orcs, gobbos, dwarves and empire (? Sorry, didn’t hear the last one and aren’t too familiar with Warhammer lore).

- They want to do variant army lists like in 40k – a Slaanesh knight list was the example given.

- What units they use can be tricky, due to Forge World’s more pricy nature. Hobgoblins, for example, would be impractical as they would require too many guys for their cost in real money.

- They do, however, want to explore Cathay and such, but in the future. 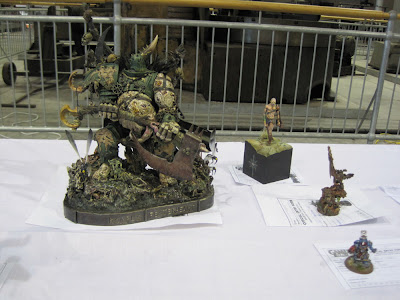 - “Will you be making the Primarchs?”
“If you’ve read the Black Library books you’ll understand when I tell you ‘I can’t say’.”

- They want to make all the weapon options/units available they can to “stop little companies springing up in Poland”.

- The Marine armour variants were testing the waters for a HH series, which they have been working on for a year or so.

- They are working closely with Black Library to include bits of each other’s work (the Caestus appears in Fear to Tread for example). This also means they don’t mess anything up, and might even lead to BL characters appearing in mini form.

- Mechanicus? Almost certainly, but not for a while - it’s something Mark really really wants to do.

- They know it can’t be all marines all the time, and there will be xenos and non-marine forces dealt with in time.

- First book will begin at the start of the Heresy, but the lists will be designed to show off pre-Heresy forces and their fighting styles, as no divergence into chaos had happened yet.

- The Horus Heresy series is going to be ongoing, much like the Imperial Armour books, and each line will have a separate team working on it. 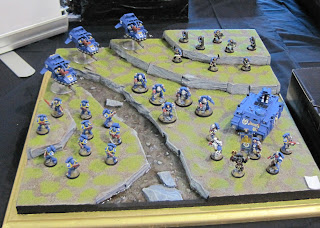 - The HH series is designed in such a way that people can use their existing armies as much as possible.

- Running quotes: “It’ll be like Christmas… it’ll blow your minds.”

This seminar was literally just under an hour, and it was straight into the design team one with Jes, Kevin Chin and Jeremy Vetock.

- Jes loves plastic. LOVES it. If he could he’d do everything in it as for a sculptor it’s far better with almost no distortion or deformation. He foresees a future with only special characters being finecast, and generic characters all being single frame plastics like the recent Warhammer releases and the limited Dark Vengeance Chaplain.

- They want to continue putting every unit option on a frame where possible. And lots of head options.

- They’re aiming to expand the digital aspect of the company. Jeremy got very excited about the prospect, but no specifics.

- Don't call the background "fluff" around Jes. One guy did and he corrected him, pointing out that it was Jeremy's job to create that, and calling it fluff devalued it. The questioner corrected himself by saying "the expanded universe background setting", which pleased Jes no end.

- A young lad asked the following “How come Tau and Space Marines are ‘battle brothers’?” and got a huge cheer and round of applause from the audience. The reply was that yes, Tau and Marines often murdered each other on sight, but there were enough times when they didn’t to justify it. The allies matrix is there as a guide, not a proscription.

- "Why did they swap Marine chapter symbols from right to left shoulder?"
"I don't remember."
One of the attendees ventured that it was so (in universe), that when advancing the enemy would see the chapter symbol on a PA guy and know who's killing them, while terminators shoot one handed, so keep it on their right.
Jes thought that was a superb explaination, so he was going to accept that. He then went on a ramble about contradictory history and so on for a bit.

- If they can they would like to introduce 40k Dogs of War type units to use as allies to bring in lesser races. One of the reasons they brought allies back.

- There is a mathematical formula for points cost, based off a man (Warhammer) or a Marine (40k). This is then adjusted by feel for how the unit works within a given army or theme of the army.

- No release date/info for Sisters, but they definitely aren’t canned and will be re-done properly.

- A lot of the discussion was about the creative process and such, so not easy to describe. They were all very funny and there was a lot of laughter, so much of the discussion fall into the “you had to be there” category. 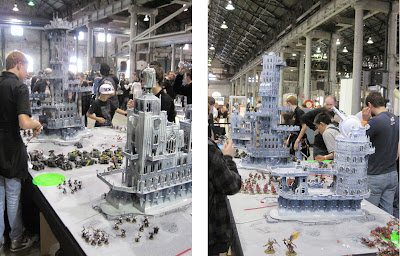 - All attempts to draw out any release data on Dark Angels or Chaos were skilfully avoided.

- Dark Angels were chose because it allowed them to include Deathwing and Ravenwing rather than generic units. Chaos were in because they’ve done ‘nids and Orks. “Now we’re out of bad guys so I’ve got no idea what we’re going to do next”.

- Cultists were in, despite not being in the codex as they needed to create new things when they get the opportunity or the game will stagnate.

- For designing Chaos Jes said there are too extremes: the renegades, recent converts and represented by regular marines with spikes on; and the warped, those totally mutated ones. Both are equally valid and he’s hoping to have more warped ones like in Dark Vengeance coming out. For vehicles it will mean more daemon engines on the table. 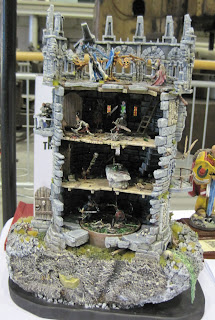 Jes had a solo seminar, where I accosted him about his constant use of topknots on minis (he likes the feral yet combat ready look, it allows Eldar to have hair but not be too slicked down, it helps with multi part minis to have long hair as if it isn’t tied up you can’t pose the head, and he thinks they’re cool).
The fallout of this is that I have to send Jes a photo of my hair in a topknot when it is long enough. 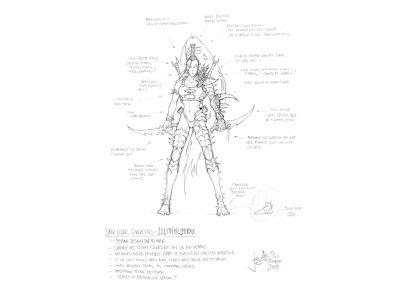 I also talked to him about sculpting female minis, and he said that he dislikes the all to frequent chainmail bikini look and has copped some heat of the muscular Wyches. Regarding Lelith his concept was all about emphasising her athleticism rather than sexualising her with “huge tits… but Juan is a butt man anyway…” 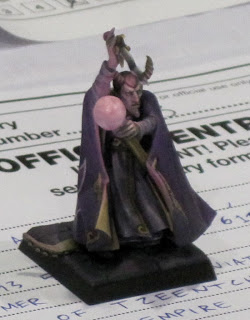