This year's Games Day anthology features six short stories by the usual suspects in an A5 hardback format. I've only read the 40k stories so far, so will only be covering them here.

The book itself is well put together and the hardcover works with the small, thin (124pg) size. The only oddity is the printing of the title pages for each story - they are curiously faded as if they weren't printed properly. I can only assume it is a mistake involved in transferring from colour, as they feature their respective universe's logo (ie the Warhammer 40,000 eagle). Still, no problems with the actual text itself. 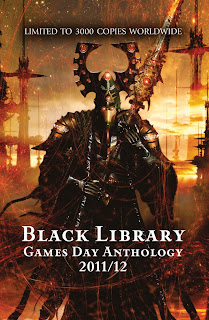 The first story is Death of a Silversmith, by Graham McNiell, set during the Horus Heresy. Unsurprisingly it concerns the death of a silversmith. In this case he is a specialised remembramancer aboard the Vengeful Spirit, who is so renowned for his work that Sejanus commissions four rings for the Mournival. But another commission, to make a series of small silver medallions, proves his undoing.
The story is well paced and shows a more peaceful side to the Great Crusade, taking place mostly in the memories of the silversmith as he dies, recalling his life.

The next two stories are interlinked - The Curse of Shaa-Dom and The Treasures of Biel-Tanigh by Gav Thorpe and Andy Chambers respectively. Shaa-Dom splits off from Thorpe's Path series of books, obstensibly telling the story of a White Seer as they travel from the chaos artifact harbouring human world featured in the series. Biel-Tanigh happens before this, and tells of a pair of Dark Eldar attempting to steal an artifact from the titular realm - the same realm the White Seer goes to dispose of his cursed item.
The stories aren't bad, but Shaa-Dom really feels either too short or too long. By that I mean that the first part is concerned with disposing of the artifact, and then the book takes a hard right and devolves into a slasher tale. If you've seen the movie Sunshine it's a rather similar shift. The story just feels like a connecting part of a larger piece (which in a way it is) rather than a work in its own right.
Biel-Tanigh, as mentioned, connects to Shaa-Dom, but stands on its own much better. It is an action piece, but still fits in some new looks at Dark Eldar culture and their nature.

Finally comes Emperor's Deliverance by Nick Kyme. Set during the third war for Armageddon focussing on Sister Hospitilar Athena and her struggle to keep the wounded and refugees under her care safe. Though the arrival of a pair of Marines Malevolant would seem to be a boon, it proves to be anything but.
Sister Athena is a great character, as are the two Marines, Nemiok, the senior and more brutal and Varik the (slightly) more compassionate.
The story is more a battle of personality, with Athena fighting the Marine's obstinate pragmatism and callous respect for nothing but strength. The standout moment is when she implores them to help her dig out a trapped carrier loaded with refugees, but they refuse, and she shames them by doing it herself with a few servitors - "I wanted you to know that, to know that a mindless flesh-mech slave showed greater compassion for humanity than the Emperor's Angels." And then the Orks arrive and things get much worse...

But even then the heartless Nemiok is shown to perhaps have been affected by Athena's actions and bravery, and at the end there is a small tie-in with Kyme's Tome of Fire series of novels.

Emperor's Deliverance is the standout of the collection in my opinion, and if you borrow a copy and only have time to read a single story, I'd make it that one.
Posted by Gotthammer at Monday, October 24, 2011