So I recieved the new "Scorpion Warrior Priestess" (cough cough) model from Chapterhouse Studios yesterday, so I thought I'd put up a review of some of their newer products. 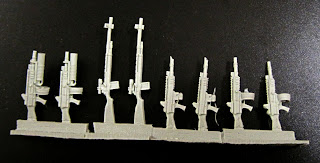 The accuracy of the guns in is quite good, though if you want to quibble the stock on the SCAR is a bit short (and they don't accept lasgun magazines...), but that's a minor issue.

Casting quality is top notch, very sharp with very little in the way of flash or mould lines. The pictures are of untouched straight out of the box parts. Compare to Forge World Elysian lasguns below: 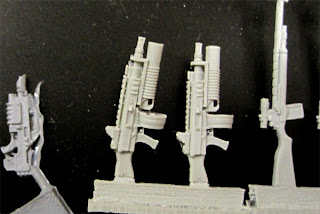 This pic does illustrate the one problem with production - the butts of the guns join straight on to the vent (the big block of scrap resin). This means it's a rather tricky process to remove the guns as the vent is a fair bet thicker than the stocks:

The warpage is not bad for parts this small IMO.
Adding a small bridge between the gun and vent would be a huge improvement to what is a fairly problematic issue.

As for useability I fear the actual guns, while lovely, will be hard to get to work. For instance look at how large they are compared to some Space Marines:

Not really an issue, and they SCARs will fit with Imperial Guard, though the M-14 might be a bit huge for Guard. The probelm comes when you try to go outside of GW's 'heroic' proportions to manufacturers like Corvus Belli, Hasslefree or Studio McVey: 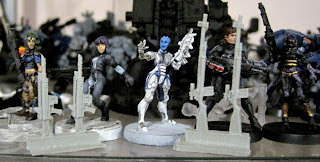 For reference here are some real dudes with the guns: 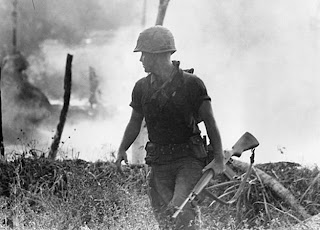 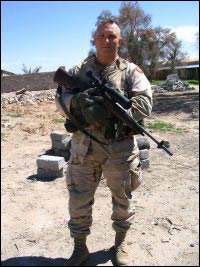 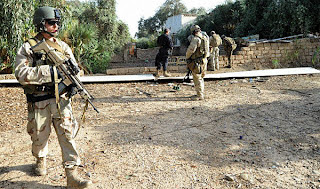 So yes, the oversized proportions really hamper their application outside 40k or maybe converting WarmaHordes minis. The M-14's rifle grip will be hard to convert easily, especially with GW's wonky proportions.

For me this is a bit of a disapointment as I'd been hoping to use the M-14 especially on some Black Scorpion minis to post-apocalyse them. I'm still going to use the weapons on either my Marines or Beastmen, but the lack of versatility is a shame. 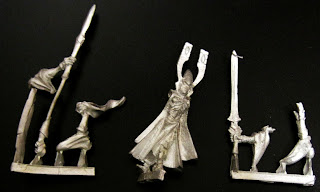 Coming with all the parts shown, with two arms for each side - sword/staff and magic bolt/heil five: 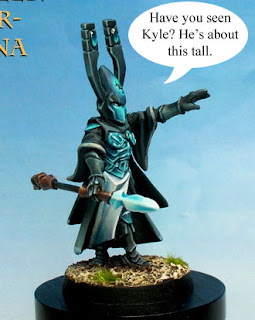 Again, the mini is very cleanly cast and has little flash. Details are crisp, though the metal itself has a few pock marks and tiny bubbles.

By an astounding coincidence, she fits in very nicely with Games Workshop's Eldar line (I know, I couldn't believe it either!), with the armour style and her acoutrements matching well. She doesn't have a lot of the very fine details of the latest Farseers, so as a comparison I'd say she's about the same as a 2nd Edition era sculpt. 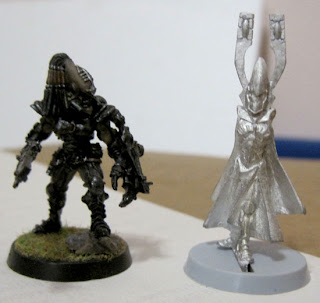 Scale wise she blends in seamlessly, and her pose isn't too static or overly dramatic, so she won't stand out amongst a seer council with GW's warlocks.

For those interested her head wouldn't be too hard to remove, though I'd use a saw or Dremel to do it.

Lastly we have the newest release, Armana'serq Scorpion Warrior Priestess.

In another crazy coincidence, Armana comes with all the options for the Striking Scorpion Exarch - Biting Blade, Chainsabres (w shuriken pistols), Claw w shuriken pistol. Aside from the Biting Blade the arms all have a small pin that fits into the shoulder socket, though it wouldn't be an issue to change the pose.

Detailing is superior to Iyanna above, but that may partly be due to Armana having less robes and so on. There is a grenade strapped to her belt, a couple of small stones and the weapons are very detailed. Her not-Mandiblasters and the Predator-esque dreads are sculpted as well as the GW ones, though the head weaposn are shorter. The highlight is that her face is very detailed and certainly one of the best I've seen on a Games Workshop 28mm heroic scale miniature.

Scale wise she is tall. Not hugely out of place tall, but were she standing upright she'd be close to a head over her counterpart: 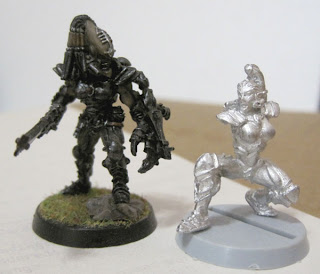 Who I coincidentally had made female...
Maybe I should join GW in a class action?
One oddity is that she doesn't have a slotta-tab, but comes with a slotta-base. Now I don't know if this is a mis-cast or what, but there's no indication of a defect and it seems a very strange thing otherwise.

Not a huge deal, but worth mentioning nonetheless.


Chapterhouse Studios themselves were very fast to ship out, with reasonable shipping prices and good comunication. I got an email when the order was 'pending', 'processing' and 'shipped'.

The miniatures themselves were probably on the higher side, less than a McVey L.E. resin, but more than a McVey metal, Hasslefree or Reaper. I imagine Chapterhouse isn't producing in as great a quantity and they do come with a wealth of options too, so I would say it's worth it.
The weapon packs are good value, certainly cheaper than Forge World.

Chapterhouse Service - 9/10 (docked them a point because the website looks like ass).
Posted by Gotthammer at Thursday, September 15, 2011