Nothing New Under the Sun - pt 1

So it goes that everything repeats itself eventually. While that’s great for philosophers and scholars, for miniature aficionados it’s a bit of a problem. See a company can’t constantly produce the same thing over and over expecting people to buy it ad nauseum. They’ll get sick of it, get ‘enough’, or get distracted by a new shiny thing.
This is why we get periodic re-designs of what are perfectly serviceable models. If people really could put up with just the same old models and designs we’d still have beaky marines, stahlhelm Orks and craxy machinist orang-utans (wait…).

GW periodically redesigns their lines to keep up with new materials and manufacturing procedures (just look at the Dark Eldar here), but in some ways the increasingly iconic nature of their designs is really hampering their long-term prospects.

How is that? Shouldn’t having an icon design (like the Jeep front grill or the Stormtrooper) help them?

In a way it does for brand association (oh hey, it’s a Space Marine, I know them from Dawn of War…) but I’m meaning in terms of retaining and re-energising the interest of more entrenched players. First this requires a slight digression to explain how I see it.

40k’s pull is it’s background and aesthetic. It is not a character driven universe. Sure, it has great characters like Cain, Eisenhorn and the like, but the core is the setting rather than the people in it. This is contrasted by, to use my earlier examples, Jeep which is associated with a lifestyle or image (and aside from a vague stylistic allusion to part of their vehicle for the most part the look is very different overall), and the Stormtrooper who is tied in with the movies, books and comics – character driven devices (though many would argue the depth of character).

I’m also deliberately ignoring the game aspect for the most part as rules development and changes is not an issue (quality is to some, but not that they are changing them). It will come into play later though.

So what we have is 40k is style over substance to a degree. It is a device to sell physical representations of that universe after all, so it’s understandable. However when that stagnates the ‘universe’ stagnates. It’s hard to get excited over a new model when it’s almost identical to the one you currently have. The “she’s got a new hat!” effect only happens rarely. 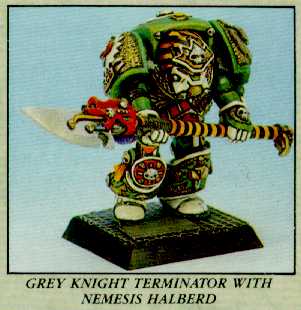 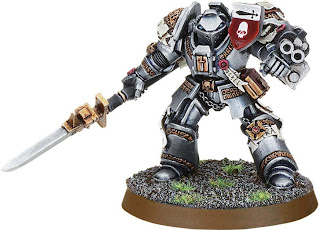 Quite a makeover they got really.
For me this was most apparent during the Grey Knights release. While most of the focus seemed to be on the rules and their relative levels of broken-ness, the model discussion seemed almost solely to fall on the Dreadknight. Why? Well, he was the only new thing there, and a lot of people hated him. 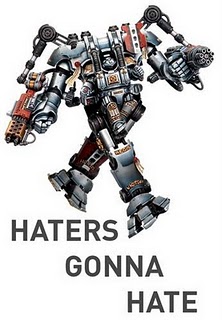 Sure we got teleporter backpacks, a couple of new guns and the plastic kits were very nice… but they’re the same guys as before with a couple of bits stuck on. Most discussion of the Grey Knight plastics pre-release involved discussion about how their new bolter magazines weren’t right, or how people would have to cut the halberds off their metal dudes to give them swords and the like.
Remember when the Dark Eldar first appeared at Games Day and the forums were flooded with people’s brains exploding at the awesomeness?
The difference was the power of redesign and giving it something new.

How does this relate to 40k being held down by its iconic designs? Well the more entrenched an idea becomes the harder it is to shake. Anyone familiar with Transformers fandom will be well aware of the “Trukk not Munkey!” arguments, now superseded by hating on “Bayformers” or Animated.
For a 40k example imagine the nerdrage if GW introduced female Space Marines, no matter how well done. There’s still that one line some 20 years old that hasn’t been contradicted before and has stood for so long that I’m pretty sure Jervis’ face would melt off Raiders otLA style if he read half the hate mail he’d get.

That said, GW has quite successfully changed a large number of their designs quite successfully – and I don’t mean an update like the Dark Eldar – I mean a redesign like the appearance of the brick style Dreadnought at the beginning of 2nd ed, the new Land Raider, replacing mk6 with mk7, the aforementioned Grey Knights and more recently the Dark Eldar Scourges and Haemonculus coven units. 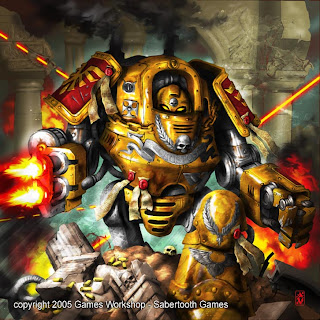 This look isn't new, it's the plastic 2nd ed Epic design.
But why is this change important?

GW is in trouble at the moment. Price rises and increasing (and increasingly aggressive) competition in an unfriendly economic climate mean they’re competing in a tough market for limited funds. He who has the best product at any one time will get the dollar. This is doubly true for those of us whose primary interest is in painting and modelling over playing - I’m not going to buy a GW miniature out of loyalty when a Dark Sword, Red Box, Studio McVey, Maow, Infinity, Wyrd, Soda Pop, Hasslefree, Privateer Press, Reaper, GOT, Heresy, Scibor, Micro-Art or any other of a dozen manufacturer’s minis will do just as well.

By this I mean the last GW models I bought were the Scourges, before them the Forge World Corsairs, before them the Dark Eldar when they came out and before that…. Um I think it was probably Marines to continue building by Company. It’s honestly been quite a while since I’ve picked up a GW miniature on a whim because it was too cool to pass up. Most of their designs are many, many years old so unless I want something specific there’s no need to go in and check things out. I’ve bought quite a few character minis, yes, but they were for projects such as needing to finish an army or the like.


GW, despite claiming to make the best miniatures in the world, is not the miniature lover’s miniature company anymore. It all seems very much same ol’ same ol’ down at the design pits at Nottingham. Is all hope lost? Is there a future? Where did it all go wrong/miss big?


More on that tomorrow, but for now: No, yes and let’s just say that everything I’ve just said is a lie.