I finished off my Galadhrim Knights, which is good as they took the field in a battle today: 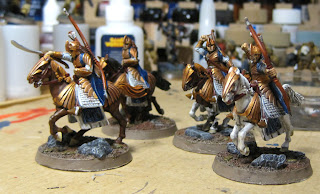 Basically the same scheme as the warriors, but with bows done in Vermin Brown.
The horses are a mix of Bestial Brown, Skull White and Scorched Brown. Manes are done in Vomit Brown and Charadon Granite. 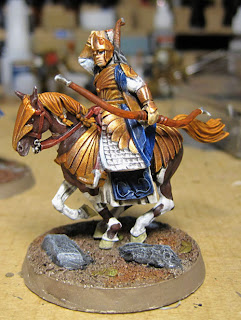 My opponent had Legolas and an all foot force composed of Numenorians and High Elves with blade and bow.

The first game was Sieze the Prize - get to the centre objective, dig it up and escape off of the board. Basically I used my cavalry to speed up, get the objective first and race off. Game over in 4 turns. 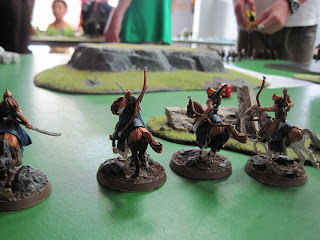 The knights speed towards the objective (the red dice in the centre) - the enemy forces can bee seen in the distance.

We replayed and rolled up Domination - 1 objective in each table quarter. In the end it was 3-1 in my favour, partly due to some lucky rolls for priority and one swordsman fending off eight enemy warriors! Unfortunatley, I forgot to get a picture.
Posted by Gotthammer at Monday, March 08, 2010